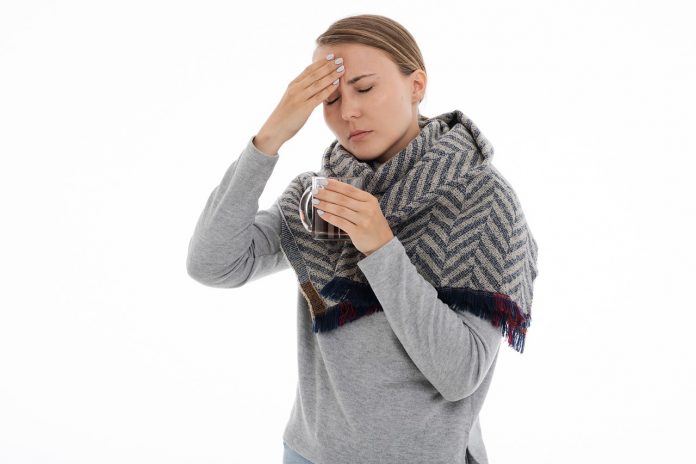 The Causes and Symptoms of Common Cold

The common cold is caused by a large variety of viruses, which mutate quite frequently during reproduction, resulting in constantly changing virus strains.

The common cold is generally transmitted when drops coming out when a person sneezes or coughs get airborne and then are inhaled by another person. Transmission by direct contact with a sick person is also frequent. Between one-third and one-half of all people exposed to cold viruses become infected and develop symptoms after 1-2 days.

The symptoms from the windpipe are the strongest by the common cold:

– The throat feels sore, and a sore throat is often the starting symptom.

– There will then be increased secretions of mucus from the nose, resulting in running nose and drier secretions building up in the nose.

– The throat will also secrete more mucus, resulting in a wheezing sound, and possibly building up of drier secretions.

– There will be swelling in the nose and throat.

– Cough and sneezing are important symptoms of the common cold. These reactions are stimulated by the building up of secretions and of the swelling in the windpipe.

There may also be mild symptoms from the rest of the body.

– Mild to severe headache is common.

– A mild fever may occur.

– Some persons experience a little neck stiffness and pain in the neck when trying to flex it, but this symptom must not be great. If this symptom is great, it can be a sign of meningitis, a very serious disease.

The Prevention and Treatment of Common Cold

Staying away from people being sick and strict washing habits can prevent the transmission of common cold, but it is difficult to carry through a strict enough regime of this sort in a populated society.

Because of the frequent variations of viruses causing common cold, successful immunization has not been developed.

The immune system of the body usually manages to beat down the infection within some days. By having the common cold one should hold an activity level that feels comfortable. It is not necessary to strictly restrict the daily activities level.

High doses of Vitamin C have been proven to help prevent colds and gets rid of the cold faster, but the doses that must be used are impractically high if Vitamin C is used alone. However, a combination of lower doses of Vitamin C with other natural substances may be useful.

Common treatments of colds have the aim of relieving symptoms and of strengthening the immune system so that it can beat the infection better. Pain killers such as aspirin and paracetamol relieve the pain by the common cold effectively, and is the most common treatment for this disease. However, both drugs can give adverse reactions if they are used in greater amounts than recommended and even recommended doses can sometimes give dangerous effects.

Aspirin can cause internal bleeding and both aspirin and paracetamol can cause liver damage. For children and teens it is advised to use paracetamol, because the liver damage caused when young people take aspirin can be very severe. The drugs should therefore be used with caution and not for a long period of time.

Drugs to loosen mucus, to decrease swelling, to decrease mucus production or to suppress the cough reflex can be effective to relieve symptoms. These drugs are often made to mainly loosen mucus or mainly suppress exaggerated cough, but these two effects can be blended in the same drug. These drugs may be liquid, be prepared as nasal spray or as tablets to suck on. To choose the right drug for your child or yourself, you must examine to find out what are the main symptoms: Mucus production, whether the mucus is loose or hard, swelling or exaggerated cough.

Steam inhaling is a traditional treatment long used in many countries. The treatment can help loosen the mucus so that the windpipe is easily cleared by cough. The treatment may also to some extent destroy the virus.

The drug Pleconaril is meant to attack the viruses causing the majority of common colds, picornaviruses. The drug has been developed by ViroPharma Incorporated and Schering. The drug is available in oral form and inter-nasal formulations are being developed, but the efficacy of the drug is not clearly established and the drug is not yet approved for general use.

Interferons are used nasally in Eastern Europe to treat common cold. Interfeons are natural proteins than regulate the function of the immune system.

There are herbal and mineral supplements on the marked that may strengthen the immune system and thus prevent colds from occurring, ameliorate the cold if it still occurs, and help the body to fight down the disease faster. These supplements often contain extracts of Echinacea Angustifolia. Treatment with this herb should not exceed two weeks.

The Causes, Symptoms and Complications of Influenza

Like colds, influenza is caused by virus strains that mutate frequently, but there tends to be one main virus strain each year that spreads throughout the globe.

The transmission of the disease occurs by secretions from sick people. These secretions can be carried as drops through the air, contaminate surfaces people touch, or get into the food. Symptoms start one to four days after the virus has entered the body.

Flu often begins as a diffused lack of wellness that persists for some hours, and sometimes for a couple of days. Sometimes the flu does not progress past this stage. However, after some time the symptoms often suddenly get worse with a great degree of general discomfort. By flu the symptoms from the windpipe are the same as by common cold, but they are weaker:

– The throat or nose feels sore, but usually mildly.

– There can be some increased secretions from the nose and throat.

– There will be swelling in the nose and throat.

– Cough and sneezing are symptoms.

Symptoms from the rest of the body are the strongest by flu. The symptoms can be distributed throughout the whole body:

– Flu often gives high fever. High fever is the most important symptom to separate influenza from the common cold.

– In spite of the fever, there is often a feeling of coldness in some parts of the body or of general coldness.

– There will be nausea, often severe, and often vomiting. Severe nausea and vomiting are also good indications of influenza, especially by children and teens.

– There is often a marked feeling of tiredness and general weakness.

– Mild to severe headache is common.

– Aching around in the body, for example in muscles and around joints is common.

– Some people experience a little neck stiffness and pain in the neck when trying to flex it, but this symptom must not be great. If these symptoms are distinct, the disease can be meningitis.

– The eyes can be red and irritated.

Having the flu decreases the resistance against other viral and bacterial diseases substantially, especially if one does not get enough rest and comfort when having the flu. Lung infection and throat infection by bacteria are common complications by flu.

The Prevention and Treatment of Influenza

As with the common cold, staying away from people being sick and a strict washing regime may also prevent the transmission of the influenza virus, but such a regime is difficult to carry through.

It is often possible to prevent the flu with a vaccination. However there are many strains of the flu viruses, and therefore the vaccination must be given exactly against that strain being epidemic at any given time.

By flu it is important to reduce the activity level and keep oneself warm and comfortable until all the symptoms have resided. By severe symptoms, bed rest is recommended. Straining and stressing during a flu episode easily result in an aggravated disease and additional bacterial or viral infections.

It is advised to stay away from tobacco when you have the flu.

Aspirin or paracetamol can be used to relieve the pain and bring down the fever. As by cold, paracetamol is commonly recommended, especially for children and teens. The drugs should not be taken in higher doses than recommended and even recommended does shall be used with caution, and not too long.

There are modern drugs that help against the proliferation of some strains of influenza virus in the body, and thereby alleviate the disease and shorten the time it takes to get rid of the disease. The two classes of anti-virals are neuraminidase inhibitors and M2 inhibitors (adamantane derivatives). Neuraminidase inhibitors are most often preferred, for example the drug Tamiflu. These inhibit the action of the enzyme neuramidase that the virus uses. There is a reluctance to use these drugs because strains of virus not susceptible to the drug can develop, and the stores of the drug can easily get short with extensive use.

Drugs to decrease swelling, inhibit mucus production, loosen mucus and suppress coughs can also be used by influenza as by common cold.

The same natural supplements used to improve the immune system against colds may also be of help to prevent flu and to help the body to overcome the disease faster, like supplements with Echinacea and vitamin c. Some herbs in the genus Scutellaria (skullcaps) contain a natural neuramidase inhibitor and may also help against flu. Scullcap is often prepared as tea.

Distinguish Cold and Flu from Meningitis

Meningitis is a serious disease that requires immediate treatment. Meningitis may begin with the same symptoms as cold and flu. There are however two symptoms that strongly suggest meningitis:

By meningitis there is often severe neck stiffness. If bending down the neck is very difficult and causes severe pain, the condition may be meningitis.

The other symptom is red spots in the skin that do not get pale when pressing at them. These spots can occur anywhere on the body.

When some people, and especially a child, gets sick with cold or flu-like symptoms it is necessary to measure the temperature, check for neck stiffness and to look at the whole body to detect any red spots. These checks should be done several times each 24 hours. In this way one more easily distinguishes between common cold and flu, and meningitis is more easily discovered in time.