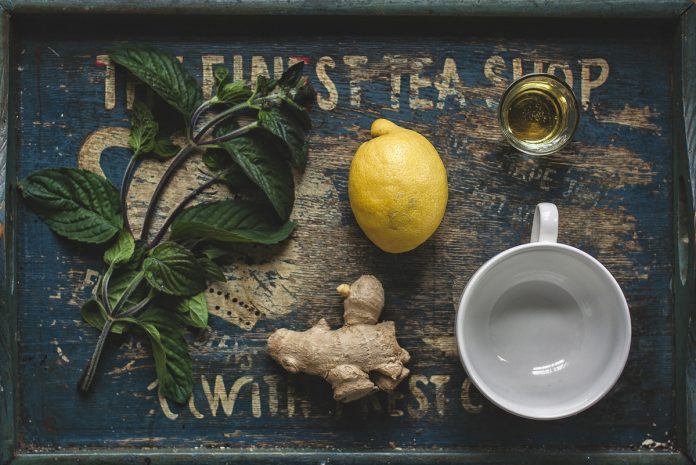 A common cold is always lurking somewhere, whether you live in the southern hemisphere with the winter months fast approaching, or in the northern hemisphere where the change of season can bring the occasional “spring cold”.

Five herbs, which are also very common in almost every household, can help a great deal in fighting the onset of a cold and to help get rid of the excess mucus and coughing – the most annoying symptoms of colds!

Garlic has long been known for its beneficial action on the immune system. It is very good both for the digestive system and for the lungs and respiratory system. In the past garlic has been used for bronchial infections and tuberculosis. If you don’t like very much the taste of fresh garlic, you can buy it in capsules and it works well. However the best way to use garlic in the case of a cold is to crush a fresh clove, add some fresh grated ginger (see below), pour some boiling water, add some lemon juice and honey and have it as a tea. Taken in this way garlic is also beneficial for the sore throat which often comes with a cold. Garlic also helps in getting rid of the mucus by coughing it up.

Ginger has many therapeutic properties. It is probably mostly known as an aid in digestion and as a relief to both morning sickness and motion sickness. It is also widely used as a treatment for muscle spasms and to help blood circulation. The use of ginger is also highly recommended in the treatment of asthma, bronchitis and other respiratory problems and it is also helpful in breaking fevers by warming the body and increasing perspiration.

Cinnamon, which is generally known for its anti-inflammatory, anti-spasmodic and anti-clotting properties is also highly valued for its warming qualities and therefore effective to provide relief for a cold or a flu. You can use it as a tea mixing it with fresh ginger. High doses of cinnamon can cause a miscarriage, so use it with caution if you are pregnant.

Elder has strong antiviral properties and it is well known to help destroying intestinal worms. It is also useful in case of rheumatism and diseases of the respiratory system. A tea of elder flowers helps detoxify the body, and therefore is very beneficial for colds, flu and bronchitis. Like ginger, elder is also useful in increasing perspiration, helping in this way to detoxify the body and breaking fevers.

Thyme has great antiseptic properties as well as being an expectorant and digestive tonic. It is highly regarded in the relief of respiratory congestion, bronchitis, asthma, cough and sore throat. It can be use as a dry herb to make a tea, or add a few drops of thyme essential oil, together with eucalyptus and peppermint essential oils in an air diffuser to help you breathe easier and give the room a healing and calming scent. As in the case of cinnamon, thyme also should be use with caution if pregnant.

Echinacea has been publicized and sold all over the world by natural supplements producers as a prime natural remedy for colds. Then, all of a sudden, in 2003 and then 2005 several scholarly articles revealed the results of studies which proved that Echinacea is not really that effective in the treatment of colds and flu.

The reason for this “discovery” is quite simple. If you look at ancient uses of Echinacea, both in Old Europe as well as among many native American tribes, you will discover that Echinacea has always been used for snake, spider and insect bites which are severely swollen. The highly regarded cleansing and detoxifying properties of Echinacea are in fact extremely effective for blood poisoning. However, this has nothing to do with colds and flu, which is probably the reason why Echinacea didn’t bring any major relief with those ailments.

Laura Ancilli (PhD) is a researcher and a journalist. Her life long interest in nutrition, energy medicine and alternative therapies took her on a 20 years learning journey during which Laura has studied, researched and often experienced on herself different healing techniques, from foods, to herbs, to massage techniques, to EFT (Emotional Freedom Technique).  http://earthlyenergies.blogspot.com/