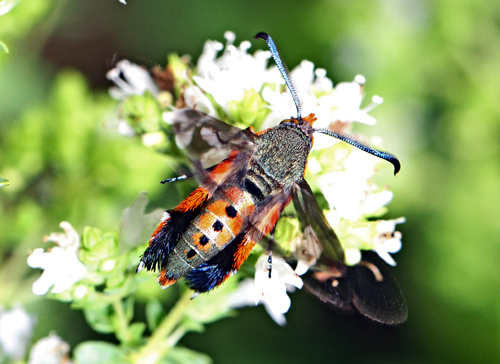 Recently a grower from the UK sent us a photo of damage to a pumpkin plant and wanted to know what it was and whether it could be controlled. This pest had apparently been a problem for a long time, to the extent that it was questionable whether it was worthwhile planting pumpkins or squashes again.

Like all vegetables, pumpkins and squashes are no strangers to diseases and bugs. Squash Vine Borer (Melittia cucurbitae), which is what was affecting our grower’s pumpkins, is only one of the range of pests that affects members of the cucurbit family (members of which include pumpkins, squashes, zucchinis, cucumbers, melons etc). Besides the UK Squash vine borer lives in most temperate areas of North America, although not on the Pacific Coast. This pest is renowned for the fact that you cannot see it until it is too late (when the plant is wilted and does not recover when watered). Close examination will reveal that the stem has been severed just above ground level.

When you examine the base of affected plants, you will notice a small hole and some frass (sawdust-like droppings). The hole is a sign of the presence of the Squash Vine Borer. If there are multiple numbers of borers, these pests can actually cause the stem to break – especially if it is windy – or to rot, depending on the weather. The injury will also prevent the plant from taking up water and nutrients, which will ultimately cause it to die.

The Squash Vine Borer is the larvae of a species of black moth that attacks both wild and cultivated varieties of squash. The moth looks like a bee or wasp because of its movements, and the bright orange scales on its hind legs. It has a wing span or around 25 to 37mm (1 – 11/2 in). The females usually lay reddish-brown eggs on the leaves, and when they hatch the larvae bore their way into the base of the stem; the larvae develop and feed inside the stalk, eventually killing the leaf. From the leaf, the caterpillars migrate to the main stem, and with enough feeding damage to the stem, the entire plant may die.

Squash Vine Borers can affect hubbard squash, pumpkins, zucchinis, gourds and other squashes. It is not common to find them on melons or cucumbers. Control Gardeners find Squash Vine Borer a difficult pest to combat. Some try to avoid it by timing the production season to harvest before the pests can build up, or after they have peaked. However, there are cultural control measures that can be implemented.

As Squash Vine Borers overwinter in the soil as larvae in cocoons, removing and destroying old vines after harvesting will help. Tilling the soil will also help to destroy any cocoons that may be there. Birds will also assist you with this job once the soil is tilled.

Once your crop is planted, if you are vigilant, you may be able to remove eggs when they appear. As the larvae usually bore into the stem close to ground level, a paper or other wrapping at the base of the stem may assist as a barrier. If you notice the plant wilting or a hole at the base of the stem, it is possible (if you are very careful) to slit open the stem and remove the larvae, and then cover the stem with moist soil so that it can grow more roots. In fact if you notice a hole, you can even just pile some moist soil over the affected area to try and promote new root growth so that the plant will not die.

An old trick for growing pumpkins and squash is to cover the vine with earth at various points along its length, inducing rooting at several points, thereby continuing to feed the developing fruit despite the loss of the original stem. After the vine has taken root at multiple points, the infected portion of the plant can be cut off, along with another inch where the larvae is eating into healthy tissue, without significant damage to the plant. Row covers are another option that can be used up until bloom.

Some gardeners use pesticides, but these are ineffective after the larvae are inside the plant. It is also not recommended as these pesticides used to kill the adult moth may contaminate the flowers and thus kill pollinators through poisoned nectar or pollen.

Lucia Grimmer is a world renowned expert in plant disease and nutrition who trains horticulturists, agronomists and professional growers. She has won awards for her technical papers and regularly conducts trials on a range of crops with the objective of improving yield and reducing disease.

Growing Tomatoes and Growing Potatoes and have sold to thousands of novice and professional gardeners in 85 countries, and have been featured on TV, radio and leading gardening publications in 4 continents. http://bestjuicytomatoes.com/