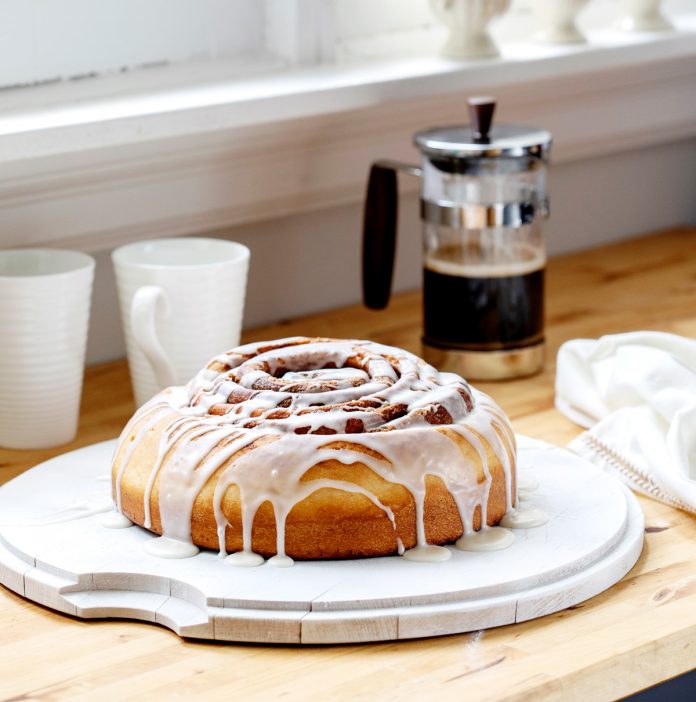 The scent of a freshly baked cinnamon bun unfailingly invites a smile, but when a single giant bun is pulled from the oven, applause is in order. Get the whole family cheering with this delicious new take on a classic morning treat by chef Anna Olson.

Start preparing the dough the day before so it can firm up overnight. For best results, bake using the LG ProBake Convection Slide-in Range with AirFry. The oven promotes a perfectly golden-brown crust while the amplified circulation from the air fry feature coaxes the best “lift” from the dough, so it rises evenly as it bakes.

1. For the dough, measure flour, sugar, yeast and salt in a stand mixer bowl. Stir hot water and milk together in a small container. Add milk mixture and eggs to bowl and start mixer on low, letting it go for a minute or two until dough is almost combined. Add butter, a few pieces at a time, while mixer is on. Increase speed one level and continue mixing until dough looks smooth, about 6 minutes.

2. Transfer dough to an ungreased bowl, cover with plastic wrap and let sit on the counter for an hour. Refrigerate overnight (6 to 24 hours).
3. For the filling, beat butter by hand to smooth it out, then add brown sugar and cinnamon, beating well.

4. Grease a 9-inch springform pan. Turn dough out onto a lightly floured surface and roll into a 12 × 18-inch rectangle about ½ an inch thick. Spread filling over dough.

5. To make the giant spiral, cut dough lengthwise into four strips. Roll up one strip from the short side. When you reach the end, overlap the end with the short end of the next strip and continue rolling up into a spiral. Repeat with the last two pieces of dough so you have one giant spiral.

6. Place spiral into pan and flatten dough with your palm so it almost reaches the edges. If using the LG ProBake Convection Slide-in Range with AirFry, place uncovered bun in oven and set to proof for an hour. If using a conventional oven, cover pan with a tea towel and let sit on the counter for about an hour until the bun fills the pan — you’ll see the centre pushes up a little when it rises.

8. For the glaze, whisk icing sugar, milk and vanilla together until smooth. Use whisk to drizzle glaze over bun. Let set for 15 minutes before slicing into wedges to serve.