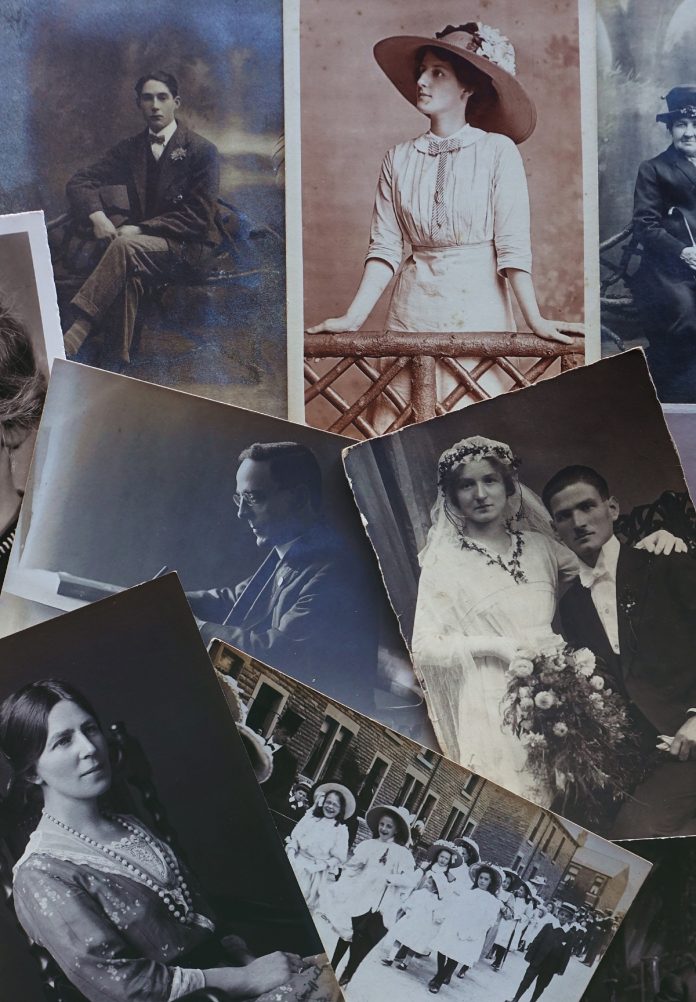 Accurately dating an old family photograph can be a difficult task. But with a little knowledge about what people wore throughout history, dating your photograph can become much easier. Clothing is a very good indication of when a photograph was taken. Here is an overview on past fashions to get you started in your research. Please note that it is much easier to date if there is a woman in the photo, as women’s fashion changed much more dramatically than men’s until the 20th century.

In the 1840s, women wore dresses with low, sloping shoulders and fitted sleeves. Waistlines were at a natural height and lowered to a point in front. Full skirts were made with many layers of underskirts. Their hair was often parted in the center with curls or braids at the ears.

Men wore tapered pants with stirrups. A cinched in waist and full chest was popular, as were standing collars. Relatively patterned fabric was more fashionable than it would be in later decades. They curled their hair and wore sideburns.

In the 1850s, women’s skirts were full and often tiered. The cage crinoline appeared in 1856. Despite being an undergarment, its structure can often be seen under a skirt. The bell-shaped sleeve worn over cotton or linen under-sleeves was fashionable.

Early in the 1860s, tiered skirts disappeared. Skirts became their widest around 1863. By 1865 the fullness of the crinoline moved to the back. Then the volume moved up to behind the butt. Hair was worn close to the head with low buns and hair nets were fashionable.

Men’s clothing remained pretty much the same in the 1860s, but neckties widened and vests were cut straight at the bottom. Military uniforms were common from 1861-1865.

From 1869-1876 fullness at the back of women’s skirts, achieved with a bustle, started low and moved up to just below the waist. Ruffles were common on overskirts and visible underskirts. Hair was worn high on the head and bangs were popular.

From 1878-1883 the bustle disappears and skirts often had trains. The cuirass bodice, a very long-waisted bodice, was worn.

From 1883-1889 the bustle comes back more exaggerated and angular than in the 1870s. The bulk of it is just below the waist.

Men’s fashion from 1869-1899 didn’t change much, but there was more pattern in the fabrics than in past decades. The three pieced suit and the ascot appeared at the end of the 1870s.

By the 1890s, the bustle disappeared and large puffed sleeves became popular.

For men, the homburg and fedora were two hats began to gain popularity. Knickerbockers were sometimes worn. Muttonchops and beards were common.

Women wore high collars with a bodices had a pigeon-breasted shape in the 1900s. A distinctive S-shaped corset was in style, although it didn’t last long.

Men’s fashion continued as it was. Very large knickers called plus fours were popular, as were curled moustaches.

Women wore column-shaped dresses in the 1910s. Waists were slightly above the natural waist. Skirts rose to just above the ankle by 1914.

Men wore pants with cuffs that creased in front. Shirt collars were tall and stiff. Watch for military uniforms in especially in men, but for some women, too, from 1914-1918.

In the 1920s, waistlines dropped in women. Skirts became shorter reaching just below the knee at the end of the decade. Bobbed hair and marcel waves were trendy.

Narrow trousers were worn early in the decade for men. Starting in the mid-20s, baggy ones were popular with younger men. Lapels widened and suits had natural waists.

By the 1930s, form-fitting silhouettes were worn with skirts longer than at the end of the 1920s.

Men’s jackets had full shoulders and nipped in waists. Trousers were wide legged and began to taper around 1935.

For men, trousers lost their cuffs and pleats and became narrower. Jackets were shorter and single-breasted and vests were not worn as much.

From 1947 and into the 1950s, very fashionable women at this time wore full skirts, a nipped in waist, and pointed bust. Pencil skirts were also in style. Hair was often short and got increasingly voluminous throughout the decade.

By the 1960s, fashion was very diverse, so I’ll only talk about a couple things. It is also not as difficult to date a photo from the 1960s, because so many people remember it. The beginning of the 1960s looked a lot like the 1950s. As the decade went on, brighter colors and larger patterns were trendy. Mini skirts arrived in 1964 and the hippie look began by 1968.

So, there is a quick overview of costume history for dating your photographs. Please keep in mind that I have covered only what was at the height of fashion and not everyone in your photographs may have had the means or inclination to wear very trendy clothes. I hope this article gives you a good jumping off point for researching the date of your photographs.

→ Pioneer Children and Their Clothing

How to Make Your Own Natural Beeswax Polish

How to Make Natural Home Fragrances