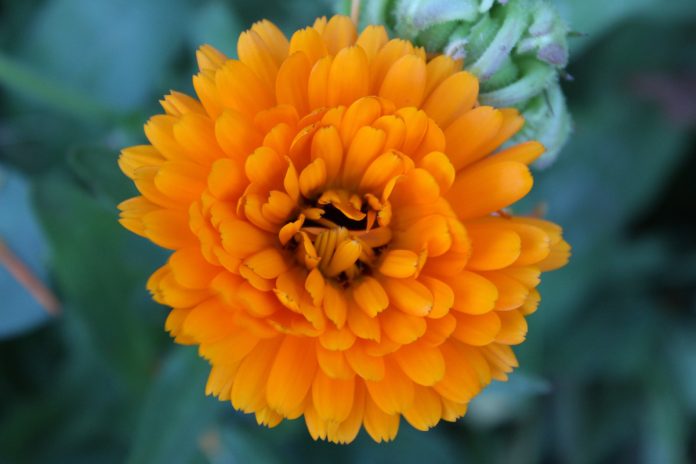 An example of this was the year the HerbFest sold “Elephant Ears” tropical plants so the heat sensitive French Tarragon, Dill, and Chervil could be planted underneath the large leaves providing shade during the hot part of the day.

Companions use garden space efficiently. Vining plants cover the ground, upright plants grow up. Two plants in one patch. This is double edged use of companion and a short exception to this rule is although a vining plant is intended to “cover the ground” that may only be due to not thinking of using supports such as fencing, lattices, or overhead stringing to direct the “vining” aspect to a vertical aspect.

Example of this is cantaloupes or watermelons and having those plants trellissed up although only practical with certain watermelon varieties since the melons can get pretty heavy!

Plants like onions repel some pests. Some plants repel insects, like marigolds, nasturtium, borage, thyme and oregano. Other plants can lure pests away from more desirable plants.

African marigold releases a chemical called thiopene which is a nematode repellent and these flowers are extensively used for companion planting. Santolina, also known as green or white lavender cotton, is a good insect repellent, especially for spinach and lettuce.

Thyme is a good protective border for the vegetable garden and repels fruit moths. Keep ants away? Catnip, Mint, Onion, Peppermint, Spearmint, Tansy, Wormwood. Remember though in many situations ants are not harmful to the plants but may be undesirable to the gardener.

Slug repellent? Artemisia, Fennel, Garlic, Rosemary, Sage (Fennel is harmful to most plants especially beans, cucumbers and tomatoes) Opposite of this would be an attractant such as good ole Bud Light in a saucer. I chose Bud Light cause it’s cheap and I can’t stand it!!!:)

Marigolds and Garlic have a reputation for repelling a number of insect pests such as Aphids and Carrot Root Flies. The Mexican Marigold, Tagetes minuta or Muster-John-Henry, is an annual which grows to about 3 feet (that is flower tip, not total plant height ). The roots have an insecticidal effect on nematodes and some effect on keeled slugs. Even better, furry varmints (such as deer, rabbits, woodchucks, voles, and squirrels) find them completely unpalatable, and neither insects nor diseases are a major problem.

The following plants, when sown near tomatoes are beneficial:

Probably the most widely used companion for tomatoes, basil attracts bees to aid in pollination, as well as repels whitefly, aphids and spider mites. Basil sprays are also thought to destroy these same pests, while some gardeners also believe that tomatoes grown near basil will also produce tomatoes with a basil tinged flavor. And of course, using basil as a companion also provides plenty of this lovely herb for your kitchen.

Thought to reduce the chances of fungal attack on your tomatoes and to also repel aphids and Green Shield beetles.

Scientifically proven to dramatically increase the overall yield of tomato plants as well as to deter fungal disease.

A family which includes parsley, parsnips, carrots and others that attracts hoverflies which in both mature and larvae form feed on a wide host of tomato pests.

Neither nematodes, nor white-flies like marigolds, which makes them a wonderful companion for tomatoes, as well as others.

Thyme, Asparagus, Foxglove, Lavender and Garlic are also good companions to be intercropped with tomatoes.

On a final note, Rosemary, Potatoes, Kohlrabi, Fennel, Strawberries, members of the Brassica family (Cabbage, Kale, etc) and Dill should NOT be planted near tomatoes for these plants often attract pests which will attack tomatoes.

Every successful garden needs plants that attract the predators of pests – humans included:).

Bob Johnson is owner/founder of Herbfest along with his wife and kids. He has served on the Board of the International Herb Association and has extensive experience in retailing by educating and informing the customer.