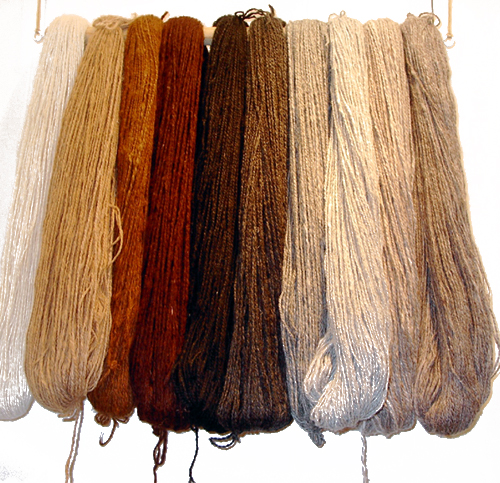 Alpacas produce different types of wool than other animals and are sought after for their uniqueness. They are camelids and are of the same family as their larger cousins the llamas. They can be bred with llamas to produce young called huarizo. While camels and llamas are usually used for pack animals or transportation due to their size, alpacas are more compact and are bred for their fiber and sometimes for their meat.

There are no wild alpacas in the modern world although the smaller vicuna is said to be a wild ancestor of the alpacas. One of the reasons they are preferable over other fiber animals is the area needed to raise them is smaller. Ten alpacas can be successfully raised per acre (0.4047 hectare). This may be partly due to a habit they have of not soiling their grazing area with waste. They will use a communal dung pile that is away from their grazing area. Often when one alpaca goes to the pile to urinate or defecate, others in the herd will follow and stand in line to use the pile. This behavior has been used to the advantage of farmers who have actually housebroken them.

Alpacas are indigenous to high mountain ranges and are accustomed to very cold temperatures and rugged terrain. Their fibers are generally more densely packed on the animal than other fiber animals and are sometimes softer than standard sheep’s wool because of the lack of lanolin. Since there is no lanolin, alpaca fiber is considered to be hypoallergenic but the downside is that it does not naturally repel water. It is flame resistant and is graded by the diameter of the fibers and the amount of vegetable matter that is submitted with the sample.

Even though alpacas are sometimes raised for meat and their status as a delicacy in some areas make them a black market target, mostly they are raised for their fiber. They are sheared yearly along with a nail and teeth trimming. Often they are sheared by traveling professionals who make a circuit of farms and ranches to aid the farmers during annual shearing. Since they do not have to be killed in order to produce their fibers, they are a renewable resource and are often raised as a cash crop to farmers and ranchers all over the world.

There are over eighty natural colors of alpaca fiber classified worldwide. This range in natural colors makes other types of wool that are standard white, grey, brown, or black less competitive.

Whilst the main professional of Alan B. Stable is an animal skin trader, selling such goods as sheep skins, he occasionally sells animal by-products like raw greasy wool. This entails a knowledge of wool testing and the different types of wool, as well as an understanding of the characteristics of a merino fleece.