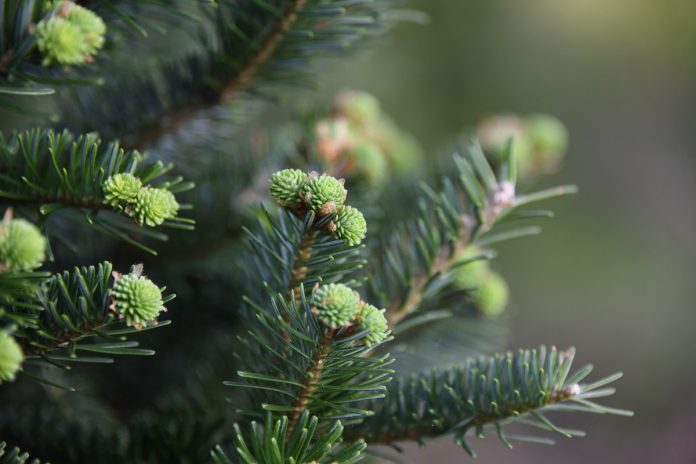 I seldom had colds, or head and stomach aches as a child. It was an act of self defense, because my father had a home remedy for any ailment. One of the most unpleasant and, consequently, effective, was his one-two-three punch for coughs, congestion or sniffles.

His first line of attack was Seneca root, chewed. I could have been the poster-boy for Buckleys cough syrup. It tasted awful, but it worked! For a deep-rooted cough, Doctor Dad prescribed a mustard poultice, mixed with dried plantain leaves applied to the chest. The mustard was the real thing, not some wimpy domestic mustard, with the seeds ground fine and boiled to a paste. It stung, and left a lasting red welt where the poultice was applied. But, it, too, seemed to work its magic in a day or so. His third offensive thrust against colds – more preventive than curative – was spruce bud tea.

The phrase, “spruce buds” sounds almost delicate and inviting. But how many of us have seen spruce flowers, so, in fact, spruce “buds” clearly is a misnomer. The spruce buds are those tips of the spruce branches that emerge in spring, a slightly bluish colour compared to the medium green of the older needles. In theory, those buds are at their most tender. Good thing, because in a matter of weeks after the last of the snow, the tough adult needles are sufficiently solid to stitch up a deep cut!

Spruce needles are exceptionally high in Vitamin C. The natives of North America were aware of this, and often picked spruce and other conifer needles to boil as a tea. The spruce was a valuable winter source of food, even in the mid to high latitudes of Canada’s prairies and northern Ontario. It is a testament to the endurance and fortitude of our North American founders!

But Dad knew how to make spruce tips palatable, in many ways. (He just chose not to do so, when providing us with a cold “remedy.” His belief was that if the cure was more distasteful than the illness, one’s body would surely learn to reject a cold in order to not have to accept a cure. It was his own aversion therapy.)

Spruce tips can be made into an acceptable, if not delicious tea, with nothing more than some sweetener. The bitter citrus taste takes on the flavor of a green tea with a slight grapefruit aftertaste.

As a spice with wild game, there is nothing quite like spruce needles. Use them like you would rosemary (another evergreen) on venison, goose and moose meat, rubbing a generous amount of needles into the surface of the meat, along with crushed blueberries or saskatoons and dried morels. You won’t find better in any restaurant.

Even more inviting is candied spruce tips. Mix 2 cups of needles with one cup of granulated sugar, and either bake on a cookie sheet at 225-250 degrees for 45 minutes, or cook in the top pot of a double boiler. Carry them with you on a winter hike for energy and nutrition.

Although early spring is the best time to harvest and consume spruce tips, conifer needles can provide emergency food during all four seasons, as well as a warm underlay for your sleeping bag when camping outdoors year round, or as a great fire starter.

Among other interests, Robert Lee is a writer who focuses on ethical considerations in business and living life simply. He is the author of six books, including The Last Drop of Living, A Minimalist’s Guide to Living The High Life On A Low Budget and Wild People I Have Known. His blogs include http://movingtoayurt.blogspot.com, as well as blogs on minimal living, finding your oasis in life (findingtheoasis.blogspot.com), harvesting wild plants and eco-innovations.