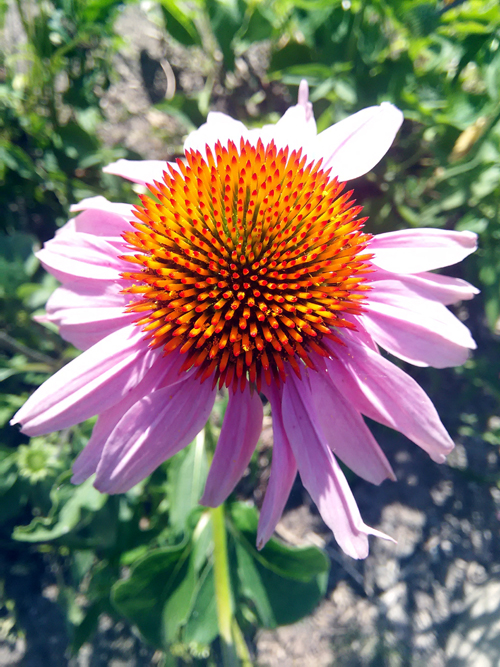 Echinacea was one of the most widely used medicinal plants amongst Native American tribes in the upper Missouri River area and the Plains. It has been reported to have been used for more illnesses than any other plant. Samples of echinacea have been excavated from Native American archaeological digs dating back 300 to 400 years.

Many tribes including the Cheyenne, Lakota and Dakota Sioux, Omaha, Ponca, Crow, Comanche, and Kiowa traditionally used echinacea for a variety of purposes. It was mainly used for its numbing qualities to alleviate the pain of toothaches and muscular pains, but was also useful for treating coughs, colds, swollen glands, and tonsillitis. Externally it was used for many types of skin diseases and also as an eyewash. Some of its more common and somewhat universal uses were to treat stings, burns, and bites including the often fatal bite of rattlesnakes. In this case the root would be used both internally and externally as the victim would chew the juice out of the fresh root, while the bite itself would be treated with fresh root poultice to help draw the poison out.

Echinacea was used for its numbing qualities as an anesthetic when performing minor surgeries. The present-day Oglala Sioux of Pine Ridge, South Dakota continue to use echinacea for a variety of reasons, including toothache. Some medicine people took greater advantage of the numbing qualities of echinacea by mashing the fresh root and combining the juice with tallow. They would then rub the salve on their hands to enable them to handle fire painlessly and thus display a supernatural ability. Others chewed the root to numb the mouth in order to hold a hot coal in it, a very common tradition among many tribes.

With the influx of Europeans to the plains, many new diseases were introduced to the Native Americans that they had never before been exposed to. This included mumps, measles, tuberculosis and smallpox amongst other infectious diseases, and a host of sexually transmitted diseases including syphilis and gonorrhea.

Therapeutic applications of echinacea expanded as a means to try to deal with these new diseases with some success. Early writers referred to echinacea as a premier remedy for the treatment of gonorrhoea and syphilis. In addition to its medicinal uses, echinacea was also used by Pawnee children in a game in which the stems were twirled around each other. Many tribes used the spiny seed head as a hair comb and chewed on the root to stimulate salivation as a means to allay thirst in times of drought.

Early Use by Europeans The earliest written record of non-Native American medicinal use of echinacea was reported in the second edition of Flora Virginica by Gronovius in 1762 where it was said to “possess a sharp-tasting root”, and to be very effective for the treatment of saddle sores on horses. At this time its botanical designation was Obelisocotheca barbulis pallide rubentibus, later named Echinacea Purpurea. In 1830, noted naturalist and botanist Constantine Rafinesque cited Native American uses of echinacea in his highly acclaimed Medical Flora.

Because of the herbs widespread use in treating rattlesnake bites and toothaches, it was also known as “Snake Root” and “Toothache Plant.” Other names referring to its physical characteristics included “Black Sampson,” “Black Root,” “Comb Flower,” “Red Sun Rower” and of course “Purple Coneflower.”