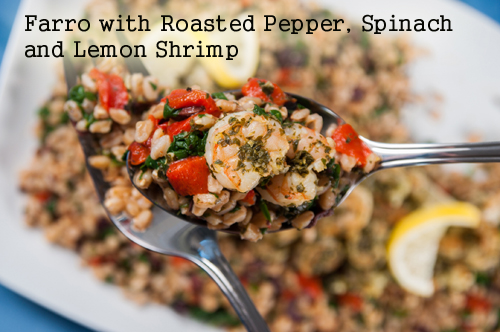 Heirloom vegetables and fruits date from the 1930s or earlier. Examples you may have tasted include Brandywine tomatoes or Country Gentleman corn. Heirloom varieties are plants that existed before man artificially pollinated them, creating hybrids that would have particular benefits, like producing abundantly or having bright color. (The genetic changes made to plants through traditional plant breeding techniques are different from changes made through genetic engineering, where genes can be added or removed to change the plant’s DNA.)

Ancient means just that – going far back in history. Ancient grains include quinoa, from South America, and kamut, an heirloom wheat known in ancient Egypt. Farro, from Italy, is another ancient and unhybridized wheat. It is botanically different from spelt, yet another ancient form of wheat, even though some culinary historians translate farro as “spelt.”

Italians cook farro whole and also grind it into flour used to make farro pasta. Whole farro can be unpolished or lightly polished to remove some of the grains’ bran-rich hull. This is called semi-pearled farro, and it is mostly what you find in the United States. It cooks in 20 to 30 minutes.

When you cook farro in boiling water like rice or quinoa, the individual grains open and puff, which is called blooming. The result, a pale pink-beige, has a mild grain taste. It is fluffy and tender, yet nicely chewy.

Here, I mix together the warm farro with chopped roasted pepper (from a jar is fine) and raw spinach. You can give this combination a lemon and olive oil dressing and serve it as a salad or a whole-grain main dish, but I like to take it further. I sauté small shrimp, along with an abundance of parsley, garlic and lemon juice and spoon all this over the farro for a very Italian combination of whole grain and seafood.

In medium saucepan, combine farro with 3 cups water. Bring to a boil over medium-high heat, reduce heat to a simmer, cover, and cook until farro is slightly al dente, about 30 minutes. Drain in colander and transfer farro to mixing bowl to cool, stirring occasionally.

Meanwhile, place parsley, garlic and lemon zest on large cutting board. Using large knife, chop together until parsley is very finely chopped, repeatedly gathering mixture together and working knife over it. Set mixture aside.

When farro is lukewarm, mix in roasted pepper, spinach, olives and red pepper flakes, if using. Season with salt and pepper to taste. Spread farro in even layer on serving platter.

Lay shrimp on paper towels and pat dry. In large skillet, heat oil over medium-high heat. Quickly lay shrimp in one layer in pan. Cook for 2 minutes, until shrimp are bright pink halfway up. Sprinkle parsley mixture over shrimp, stir until coated and cook until entirely pink, about 2 minutes. Add lemon juice and stir. Off heat, season with salt and pepper to taste. Spoon contents of pan over farro. Serve hot or lukewarm.

Something Different is written by Dana Jacobi, author of 12 Best Foods Cookbook and contributor to AICR’s New American Plate Cookbook: Recipes for a Healthy Weight and a Healthy Life.