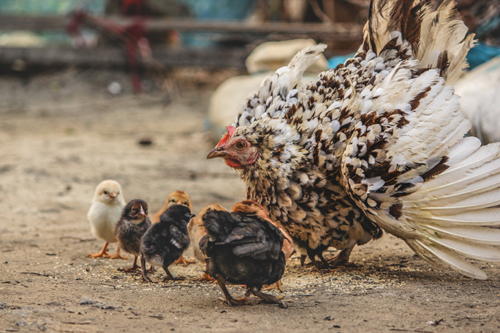 Humans have bred chicken breeds for thousands of years from wild jungle fowl. Today, there are an estimated 350 combinations of physical features for chickens. Here is a sampler of colorful breeds considered rare that are finding favor again. As a collection, they lay an assortment of rich pinkish brown, tinted white, pure white and blue/green-shelled eggs. 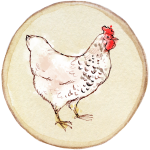 Of all the breeds I’ve raised, this is a favorite. The Wyandotte comes in several color varieties and originated in America. The Silver Laced variety was developed in New York State while the other Wyandottes developed in north and northeastern states near the end of the 19th century and during the first part of the 20th century.

There is something ‘plump and round’ about this breed. They can be raised outdoors in colder climates and have what is called a ‘rose comb’ that doesn’t freeze as easily as the single comb that some other breeds have. The plumage really does appear black, white and silvery laced, and their brown eggs even seem ’rounder’ than other breeds’ eggs and can have a pinkish cast to them. They are considered medium weight, with the male (cock) averaging 8 ½ pounds and the female (hen) weighing around 6 ½ pounds. They have a good disposition, although our Silver Laced Wyandotte rooster seemed more aggressive than our Barred Rock rooster. The hens make very good mothers. One fault that may not apply to the backyard chicken owner is that the Wyandotte’s fertile eggs are described by some as having poor hatch quality. But if you have both a rooster and hens and don’t want a backyard hatchery, this could even be a benefit.

Here is a non-commercial breed known for its white egg laying ability. It originated in Italy near the city of Ancona. This breed came to America in the 19th century. It has a mixed ancestry, which included early Leghorns and is considered very hardy and a prolific egg-layer. The eggs are white and somewhat small. Its beautiful black feathers are tipped with white and they can officially have either single combs or rose combs.

They are a lighter breed than the Wyandotte, with the rooster weighing around 6 pounds and the hen about 4 ½. They forage very well on their own and do not seem bothered by severe climates. This breed is considered rare in the United States.

Here’s the famous blue/turquoise egg laying chicken. Adding a few Araucanas to my flock really added a rainbow look to the tinted, brown, and pinkish eggs the other birds provided. Stories of its origin vary, but it appears that they came from South America near the northern part of Chile and appeared in America around 1930 when a breeder imported them. The Araucana natives bred the “Collonca” with the “Quetro” which produced a bird that came to be called the Araucana. Their coloring can be a mix of browns, reddish, tans and white, and a ‘true’ Araucana has no tail, although I was given two wild hens by a backyard breeder with beautiful tails that laid huge green eggs, so there are certainly Araucana mixes out there. This breed can be either large or small, and a true Araucana’s blue egg color should permeate through the entire eggshell, unlike brown eggs where the brown color is on the outside surface only. Their eggs are usually medium in size, and because of their recent and mixed ancestry, breeding new Araucanas from breeding stock can be very difficult, as many of the offspring may carry traits from past ancestry and may not lay blue eggs.

This breed is very uncommon in the United States, but has been raised in Egypt along the Nile River for centuries. It is a small breed that naturally matures quicker than other breeds with the young females possibly laying their eggs as early as four months. And watch out, the roosters can start crowing at five weeks! They have beautiful black, white and silvery markings and can have leg color of greenish or gray blue. They are very active and eager foragers, and the hens lay small tinted white eggs. Owners say they can become very tame, although some insist they have quite a bit of attitude as compared to other breeds!

The Phoenix is a very old long-tailed breed originating in Japan, although it is believed by some breeders to have originated with another Japanese name, and then made its way to Germany where it was refined from other long-tailed fowl and named ‘Phoenix.’ Considered an active bird, the hens lay white or slightly tinted eggs, and do not lay as many as other breeds, which works well for an owner who doesn’t need the daily egg. This breed, along with other long-tailed breeds, was once kept in imperial gardens for its unusual plumage beauty. Roosters sometimes grew tails as long as 10, 20, and some say even 30 feet, caused by a genetic trait to molt the feathers every second or third year rather than yearly, as in most breeds. Although opinions differ, most breeders agree that the true Phoenix has a single comb with slate colored legs, and today, the Phoenix rooster can sport tail feathers of a more ordinary length. Other names for similar long-tailed breeds from Asia include Yokohamas and Onagadori.