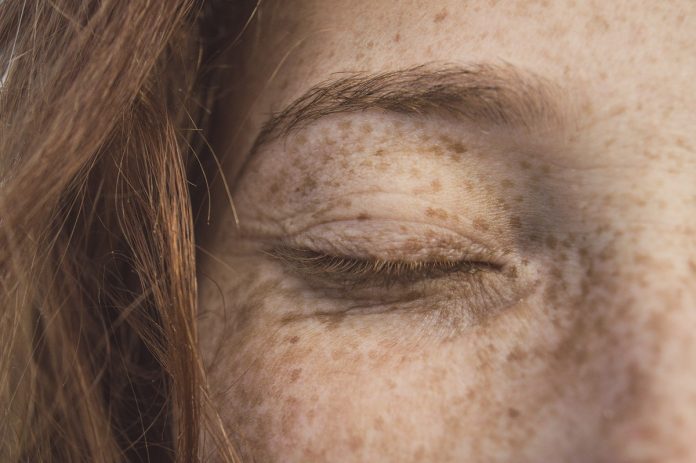 Freckles are flat, circular spots that typically range in the size of the head of a nail. The spots develop randomly on the skin, especially after repeated exposure to sunlight and particularly in persons of fair complexion. Freckles are small tan spots of melanin on the exposed skin or membrane of people with fair complexions, though rarely people of African descent get them. Freckles are predominantly found on the face, although they may appear on any skin exposed to the sun. Freckles are rare on infants, and more common on children before puberty; they are less common. When the sun’s rays penetrate the skin, they activate melanocytes which can cause freckles to become darker and more numerous, although the distribution of melanin is not the same. Fair hair such as blonde, or more commonly red hair, are usually common with the genetic factor of freckles, but none so much as fair or pale skin. Freckles vary in color — they may be red, yellow, tan, light-brown, brown, or black — but they are always darker than the skin around them since they are due to deposits of the dark pigment called melanin.

Freckles are particularly common in children, but often the onset of puberty causes the body to begin to produce more melanin. The most common location on the body for freckles to form is the nose and cheeks, though many people have freckles on their shoulders, arms and other areas that are frequently exposed to the sun. Sunlight hitting the skin causes the production of more melanin in order to protect the skin layers underneath. Dark skin that appears during pregnancy or while on birth control pills is called melasma, or the mask of pregnancy. Freckles are usually tan or light brown, flat, and very small. specks or spots which develop over sun-exposed surfaces, particularly the cheeks and nose. They are most common in fair-skinned individuals. Sun exposure makes these patches and spots even darker. Flat, large spots on the skin in middle age are caused by sun exposure, and are known as age spots, liver spots, or lentigines. Ultraviolet rays from the sun activate pigment producing skin cells (melanocytes) to produce pigment (melanin). Increased melanin is manifested as dark or brown spots on the skin.

Sun exposure is also powerful enough to change certain skin cells into dangerous skin cancers, leading physicians to recommend protective sunscreen and clothing. In some cases, freckles are sporadic, individual spots and sometimes there are several grouped together, making them appear larger and cover a greater portion of the skin.

Freckles are not harmful or the sign of a health problem. They are just pigment cells (cells that contain color) that are contained within the skin in small batches. Microscopically, the freckle is distinguished by increased melanin production.

Conventional treatments for freckles include cosmetic cover-ups and bleaching creams, neither of which have garnered satisfactory results. Cryosurgery — A light freeze with liquid nitrogen can be used to treat freckles. Several lasers, especially ones that produce a green light, can lighten and eliminate freckles safely and effectively. Tretinoin — Sometimes used in conjunction with other bleaching creams, tretinoin (vitamin A acid, Retin-A) also helps to make freckles lighter when applied over a period of time. Carbon dioxide and Erbium:YAG lasers vaporise the surface skin thus removing the pigmented lesions.

2. Freckle removal is easily achieved with lasers. The laser light is very effective and helps in eliminating freckles safely.

3. Lactic acid will provide gentle peeling effect without irritating or drying your skin.

4. Wash your face with sour milk.

5. Lemon juice is a time proven freckle fighting remedy. It is not necessary to rub your skin with a piece of lemon.

6. Natural parsley juice (or parsley infusion) mixed with equal amounts of lemon juice, orange juice, and red currant juice under your favorite cream will help you keep your freckles invisible.

Juliet Cohen is an expert in Skin Disorders.