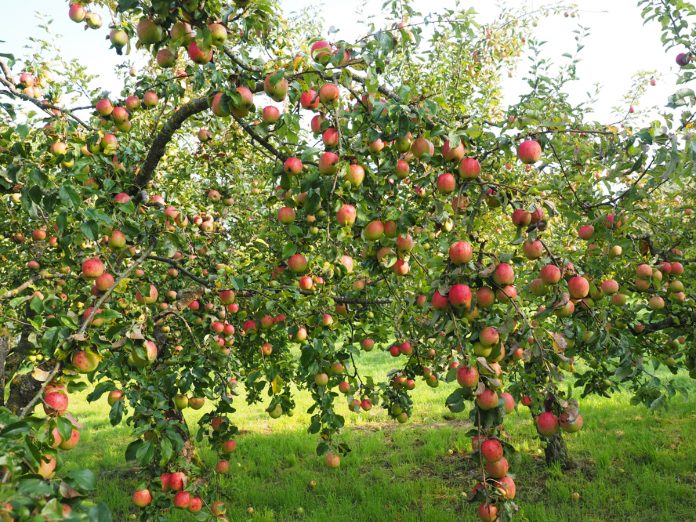 With the exception of citrus, fruits that grow on trees are indigenous to temperate zones. In fact, fruit trees require exposure to a certain number of hours below freezing in order to produce a crop the following year.

In USDA Hardiness Zone 6, the coldest winter temperatures can be -10 degrees Fahrenheit. Gardeners can successfully grow virtually all varieties of the different species of fruit trees, including plums, apples, pears, sweet and sour cherries, apricots, and peaches. It is also possible to grow some varieties of quince Cydonia spp., although quince is not a popular tree for home orchards in the United States.

All varieties of sour cherries, Prunus cerasus spp., also known as pie cherries, are suitable for Zone 5, along with the sweet cherry variety, Prunus avium ‘Kristen’.

Peaches are marginally hardy in Zone 5. The trees survive winter’s cold temperatures but the flower buds are often killed by a late spring frost, which also kills off the current year’s crop of fruit. Surecrop peach, Prunus persica ‘Surecrop’, is one variety suitable to grow in Zone 5.

The extremely cold winter temperatures in USDA Hardiness Zone 4 (as low as -30 degrees F.) limits both the types and varieties of tree fruits that can be successfully grown there.

Korean Sun pear, Pyrus fauriei ‘Westwood‘, along with many varieties of Asian pears, will reliably produce crops in Zone 4. Many apple varieties, including the variety Fireside, are excellent choices for the cold winters there.

Peaches and sweet cherries will not grow in Zone 4, but sour cherries will. Meteor sour cherry, Prunus cerasus ‘Meteor’, is a good choice for colder areas.

The fewest types of fruit trees will grow and reliably produce a crop in USDA Hardiness Zone 3, where winter temperatures can dip to -40 degrees F.

Choose apples, pears and plums to grow in there. Several apple varieties, including the Duchess apple will reliably produce crops. The variety of pear called Pyrus ussuriensis ‘MorDak’, has shown reliability in this area. Although Asian-American hybrid plums are not recommended to grow in this area, some varieties hardy in Zone 4 may survive there, in protected areas.

Not all fruits are hardy in snow country. In the coldest areas, only certain varieties of a few types of fruit trees will successfully grow and produce a crop. The U.S. Department of Agriculture has mapped the minimum U.S. winter temperatures. When fruit trees are sold, they are labeled with the northernmost zone in which they will reliably produce a crop. Some varieties may grow in a zone further north, but may not bear fruit.