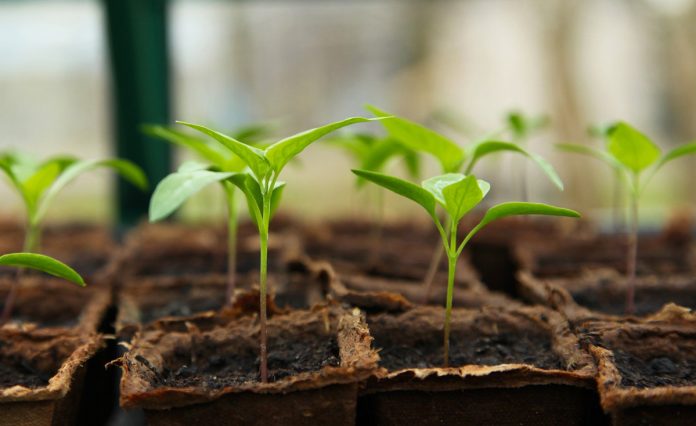 A friend told me she got nearly 100% germination of several varieties of sweet corn in just 2-3 days by laying the seed on very damp tissue soaked in a weak solution of seaweed extract. She then sowed them in cardboard toilet rolls and saved weeks of time.

In my experience, kelp does the same job. It also reduces the risk of damping off disease (‘fungal rot’). Dilute kelp 2 tbl per gallon (1 level tsp per pint) and spray on seedlings for two weeks after transplanting

To avoid damping off disease, sprinkle a thin eighth-inch layer of coarse sand over the compost when seedlings first emerge. This helps with drainage and lowers top humidity. An infusion or tea made from marestail, nettle and/or chamomile can also be sprayed as an anti-fungal deterrent to damping off.

Fertilize Plants Well Before Transplanting Them

A controversial tip is to give a high-nitrogen feed to plants before transplanting them. This is said to strengthen the plant and reduce root shock. It’s controversial because traditional wisdom says to water in the young plant, once transplanted, with only a very weak fertilizer solution, or no fertilizer at all.

But here the difference is that you strengthen the plant with a strong solution (once only) and spur it to lush growth before you transplant it. Start with four times the standard concentration of compost tea or comfrey tea (if you’re an organic gardener) then reduce to a normal concentration over several days before planting out.

Kelp solution used before and after transplanting also reduces root shock for a similar reason, I find, by fortifying the young plant with nutrients. But it’s gentler.

Cilantro (coriander) seeds germinate better if soaked for a week in a cup of water so the shell rots. This might be tried for other hard-shelled seeds.

Another way to germinate seeds which are slow to germinate – eg. carrot, spinach, parsley – is to soak them in water for a day or so then wrap them in little pellets of damp clay (seed balls). Fragments of peat or kitchen paper can also be used. They keep the seed moist.

Soak radish seed for 24 hours then pre-germinate it on damp kitchen paper. Plant the seed and the plant will, in perfect conditions, grow to edible size in as much as half the usual time.

For carrots, parsnips, beetroot and the like, dig a shallow furrow. Sow the seed, mixed with fine sand to ensure even distribution. Cover with a ½ inch of wood ash. Water lightly and lay a heavy board over the row until the seedlings emerge. The damp ash germinates the seeds and provides useful root-developing potash.

Caution: do this only in mollusc-free beds. Snails and slugs love hiding under boards, and munching seedlings! Planting potatoes in wood ash is also said to deter scab.

Plant Lettuces on The Top of Soil

Don’t bury the root balls of transplanted lettuce or brassica. Set them on top of the soil. Keep them well watered and let them dig themselves into the ground. This reduces risk of neck rot.

I’ve tried it, and it works. Lettuce and brassica are among the few plants that tolerate – and arguably even benefit from – root shock. But don’t try this with parsnips or carrots.

Pre-plant Peas and Beans in Turves

Here is a clever idea. Cut a turf one-inch deep and around one foot square from your lawn. Let it dry for several months. Turn it upside down. Plant peas in it. Then lay the entire turf on the ground and water it well. This yields the earliest peas and beans and protects them from pests.

Could that idea, of pre-sowing large seed in a turf, also work for sweet corn and squash? Or indeed, anything else that soon grows big enough to laugh at weeds?

Dr. John Yeoman, PhD lectures at a UK university and, when not out jogging with his tortoise, is an amateur plant developer and passionate heirloom seed collector. His gardening books include Self Reliance (Permananent Publications, 1999) and The Lazy Kitchen Gardener (Village Guild, 2003). He founded the centre for natural gardening ideas, the Gardening Guild, which now has members in seven nations.