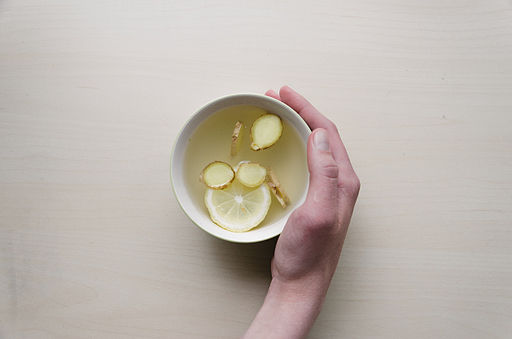 Ginger has a long history of use, both as food and medicine. Dioscorides, when writing his medical book in 77 A.D. said of ginger that it “warms and softens the stomach.” The Romans first introduced it to Britain, but when they left, it fell into disuse. It made its way back during the Renaissance, when Queen Elizabeth I is credited with having gingerbread men made to distribute to children.

So why drink ginger tea? Well, it can ward off colds, as it is full of antioxidants, the most potent being gingerol, which helps to get rid of harmful chemicals which our bodies can produce when we are under stress. It can help reduce stress levels and can make us feel good. Drink ginger with lemon and honey if you have a sore throat in winter.

How do you make ginger tea? It’s very simple. You take an inch of peeled ginger root and mince it, then add boiling water and a slice of lemon or lemon juice and sweeten it with a little honey. It keeps you warm and healthy, banishing those winter blues and colds. It promotes perspiration so is good if you have a temperature.

Ginger is also an anti-spasmodic and can relieve muscle pains in the joints. Some studies have shown that ginger lowers cholesterol levels and blood pressure, as well as preventing blood clots. It could therefore help to prevent the risk of heart disease.

In Ayurveda it is believed that ginger boosts the properties of other herbs and spices, and in both India and China people believe that this humble root as anti-inflammatory properties. The original Sanskrit word for ginger means horn root, which aptly describes the appearance of root ginger.

If you suffer from car or sea sickness, drink some ginger tea before you set out; it can help prevent motion sickness as it acts beneficially on the stomach. Because of this action, it is great for helping the body digest food as it aids digestion. If you suffer from menstrual cramps, soak a towel in hot ginger tea and place it on your stomach.

All these are big claims for a small root, I know, but I love ginger and put it in most of the dishes I cook, as well as making tea from it. One sniff of a hot cup of ginger the makes me feel good. It certainly does lift one’s mood, and keeps colds and flu away as it boosts the immune system. So, if you don’t have any root ginger in the kitchen, rush out and buy some. Make some ginger tea and feel better; enjoy this feel-good drink.

Lynne Evans has lived in Pakistan for four years and worked there as an English and social studies coordinator in an English-medium private school. She has written short stories, has a novel awaiting publication, and has also helped to produce text books for students of English. Lynne has also worked as a writer, proofreader and editor for Hillside Press, Athens, Greece, as well as for Pearson and Macmillan (London) and has traveled widely, both for work and for pleasure. She is currently back in Europe and still traveling. Lynne has become interested in SEO and online marketing in recent years and has begun to share her knowledge about this field in her articles.