Heal Your Body with Birch Bark and Leaves 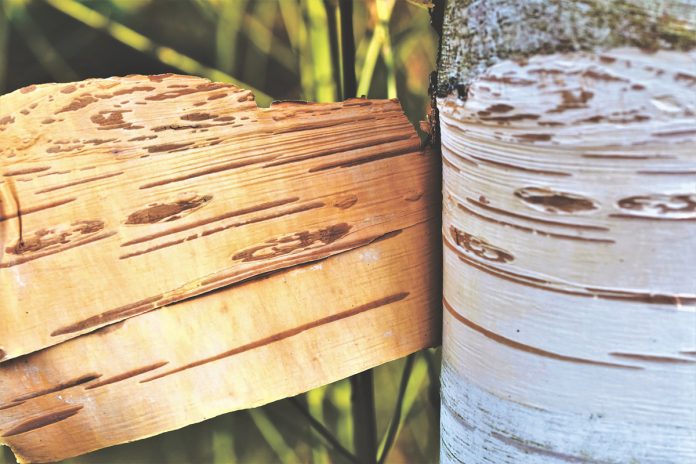 The birch species are generally small to medium-size trees or shrubs. They are mostly found in northern temperate climates. The leaves are simple and may be toothed or pointed. The fruit is a small samara, although the wings may be obscure in some species. The bark of all birches is characteristically marked with long historical lenticels and often separates into thin papery plates. The plant is practically imperishable because of the resinous oil that it contains. Its decided color gives the plant the common names Red, White, Black, Silver, and Yellow to different species. The buds of the tree form early and are full grown by midsummer. The branch is prolonged by the upper bud. The wood of all the species is close-grained and has a satiny texture that is capable of taking a fine polish. The leaves of the different species vary little.

The flowers of the birch plant are monoecious, and open with or before the leaves. They are borne on three-flowered clusters. The staminate aments are pendulous, and clustered or solitary in the axils of the last leaves of the branch of the year. They form in early autumn and remain rigid during the winter. The scales of the staminate aments are broadly ovate, rounded, and yellow or orange in color when mature. Each scale has two bractlets and three sterile flowers. These scales bear two or three fertile flowers. Each flower consists of a bare ovary. The ovary is compresed, two-celled, and grouped with two slender styles. The ovule is solitary. The ripenened pistillate ament bears tiny winged nuts, packed in the protecting curve of each brown and woody scale. These nuts are pale chestnut brown and compressed. The seed fills the cavity of the nut. All of the birch species are easily grown from seed.

Birch bark tea was used by Native Americans to relieve headaches. Some people also used this tea, which was made from the leaves and bark, for fevers and abdominal cramps.

The properties that birch bark possesses allow it to help to heal burns and wound. It also is able to cleanse the blood. Birch bark also contains a glycoside that decomposes to methyl salicylate. This is a remedy for rheumatism that is used both in Canada and in the United States. A decoction of birch leaves is also recommended for baldness. Additionally, this herb works as a mild sedative for insomnia.

The Benefits of Birch Essential Oil

The bark and leaves of the birch plant are used to provide anthelmintic, anti-inflammatory, anti-rheumatic, astringent, blood purifier, diaphoretic, diuretic, and stimulant properties. The primary nutrients found in this herb are calcium, chlorine, copper, fluoride, iron, magnesium, phosphorus, potassium, silicon, sodium, and vitamins A, C, E, B1, and B2. Primarily, birch is extremely beneficial in dealing with blood impurities, eczema, pain, rheumatism, and urinary problems.

Additionally, this herb is very helpful in treating canker sores, cholera, diarrhea, dysentery, edema, fevers, gout, and bleeding gums. One should consult their health care provider before considering supplementing with any medications. This will insure that a person obtains the best results possible. For more information on the many benefits provided by birch, please feel free to consult a representative from your local health food store with more questions.