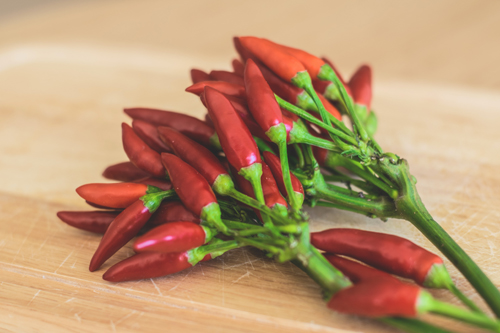 It’s easy to take common foods and herbs for granted. The row of multicolored chili peppers are a good example. Europe didn’t know about many foods. Tomatoes, potatoes and chili were unknown. In fact, tomatoes were considered poisonous when first introduced. I couldn’t imagine viewing peppers in that light…

This herb was and is used to treat many female complaints. It’s most often used now for menopause but traditional use suggests it during childbirth. I don’t agree with that use, as it could be unsafe for the child. There are enough hormones involved without adding more to the mix.

I have a short list of herbs that I believe to be completely unsafe, yet still widely available. Blue cohosh is a star example. Native and traditional use is to speed labor. Unfortunately, it also raises blood pressure to a potentially deadly level. Mothers and newborns have suffered heart attacks from the use of this herb.

A variety of herbs in North America and their medicinal uses.

Many cuisines now embrace this spicy herb, but it does have some medicinal value as well. It is used to stimulate the digestion, allowing more nutrients to be absorbed during digestion. The active principle, when rubbed on the skin, acts as a counter irritant. People with arthritis and other painful problems can get some relief as the heat deadens the nerve endings. In that way, the brain turns off the pain signal.

The “go to” plant of the cold and flu season is native to North America. The main use for it is as an immune stimulant. This herb cannot be taken for more than two weeks at a time, as it could cause problems with the immune system it’s trying to help.

Women have turned to this plant to help regulate menstruation. Only the flowers and fruit of this plant are useful, the rest could poison you. Elderberry wine and jam are also made from this bush.

The fruit of the raspberry is a popular berry, even though the seeds are kind of annoying. The leaves are the medicinal part, traditionally used during pregnancy to tone the uterus for childbirth. As with all supplements, speak to your doctor before taking this herb if you are pregnant. Also, stop taking it on your due date as it could block labor.

This herb is used in the hope of preventing prostate problems in men. If you decide to take it, make sure your doctor knows as it could block detection of prostate cancer, especially through the PSA test.