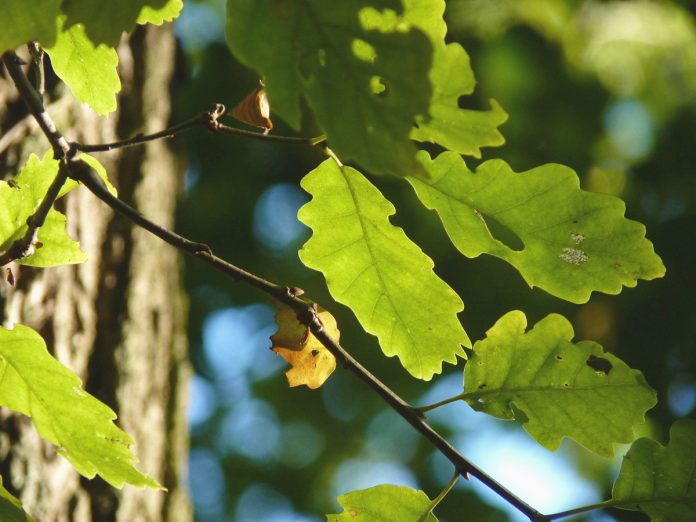 Heroditus, the father of ancient history, recorded in the mid-400’s B.C., that oak trees were reputed to have within their boughs, the gift of prophecy. The presence of oak tree galls in oak trees is caused by insect larvae that tunnel inside the twigs. The oak tree branches can become infested with numerous little galls that look like brown or tan balls, as the cells of the oak tree grow to surround the insects inside. Some cultures call these creations, ‘Oak Apples,’ and they are used commercially to produce tannins, ink and a wide assortment of medicinal remedies. The use of oak wood is well known as a hard wood with many uses reported in ancient times.

It is not an easy task to write about the history of oak trees, because there are so many species, all having different stories of their own in historical development of tree lines, having evolved in different climates in different nations of the World. William Bartram in 1773 wrote in his book, ‘Travels’, that he slept underneath the “protecting shade of the hospitable live oak, and reclined my head, and at Fort Frederica, Ga. “under the whole spreading boughs that opened a spacious avenue leading to the former seat of General Oglethorpe.” One live oak tree called the Wesley Oak, named after the founder of the Methodist Church, John and Charles Wesley, was used to carve out a rugged, wooden cross, that is still used at the altar of the Christ’s Episcopal Church on St. Simon’s Island, Georgia, also the island site of Fort Frederica, Georgia.

Over the last several hundred years, all around the world, different varieties of Oak Trees have been discovered; six hundred plus. Oak trees are desired among the gardening world for many different reasons. Some gardeners like the old world appeal of swooping oak tree limbs, covered with hanging Spanish moss. Some may like to plant them for shade trees, but what is probably the most famous association of oak trees are on the old plantations of the south. Innumerable forests of oak trees, neatly trimmed and brimming with wildlife, nibbling away at the acorns.

In locations where Oak trees are not commonly found, certain varieties can be planted to attract wildlife. Smaller nut varieties are fed on by squirrels, and birds, and larger acorn varieties like the White Oak, and Gobbler Oak and Sawtooth Oak are eaten by deer, turkey, and boar. The White Oak tree is a great wildlife cultivar to plant because of its ability to ripen acorns within one year, and its above average growth rate. The Live Oak is commonly found in woods of the Southeastern United States. Pine trees are also found in large numbers in the Southeast, so there will certainly be turkeys out in the morning and evenings looking for live oak tree delicacies, gobbling invitations for their turkey friends to come down and join them in Thanksgiving for the Fall feast.

When Oak trees are planted for shade trees one must consider the overall height of the tree. The Black Oak Tree, and White Oak Tree can grow as tall as a hundred feet, whereas, the Water Oak and Sand Live Oak, and Chinquapin Oak will only reach fifty feet or there about. Quercus rubra or Northern Red Oak, one of the fastest growing oak trees, can reach towering heights of eighty feet in just about half the time that a Sand Live Oak takes to grow fifty feet, and is often a choice shade tree among new home builders.

The chronological order in which Sea Island, Georgia memorial, and commemorative oaks were planted and are presently growing there.

1952: The Queen’s Live Oak was planted by H.M. Juliana Queen of the Netherlands.

1979: The President Ford Oak tree was planted by Gerald R. Ford on one of his many visits to Sea Island, Ga.

1991: G.H.W. Bush Live Oak was planted while the Bush’s were on vacation at The Cloister on Sea Island Georgia.

2004: British Prime Minister Tony Blair planted a Live Oak to celebrate his presence at the Summit on Sea Island.