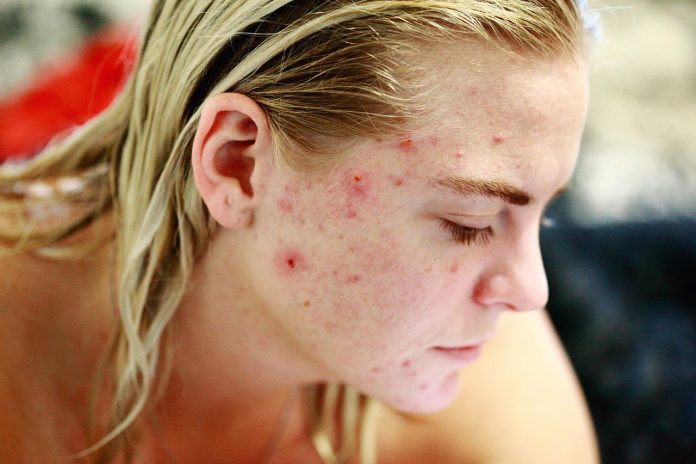 Acne is a very common skin ailment found mostly in the period of puberty. It is more common in women than in men. Acne is characterized by the presence of eruptions on the skin, which are commonly known as zits or pimples.

Acne is more commonly found in the western countries especially of the American and European continents. This could be because of a higher genetic disposition in these areas. However, the general trend is that women tend to suffer more from acne than men. Though most cases of acne come and go with the puberty, rare acne cases could continue well into adulthood.

Why is Acne Caused?

Acne is a sign of the impurity within the body. The impurity could be in the blood, which manifests itself externally as acne. If the blood is impure, then the sebaceous (sweat) glands will have to work harder in eliminating these wastes. This hyperactivity of the sweat glands causes acne.

Hormonal imbalances are very important causes of acne. During puberty there are major hormonal changes in the body, as also during each menstrual cycle of women. Therefore, these are important periods when acne can occur. People who consume steroids for any reason also stand a higher chance of getting acne.

Personal hygiene is another factor that can cause acne. People who do not care much about facial hygiene will have dead cell accumulation on their faces. These cells could develop an allergic reaction, manifesting itself as acne. Otherwise, bacteria could reside in the facial pores and cause pimples. Such factors could cause the person to itch the face, which would aggravate the acne.

Other metabolic conditions can also aggravate the acne. Indigestion is one of the known factors. People who have too much libido, but are not able to give vent to their sexual desires with actual sexual intercourse might develop acne as a result of their sexual frustration. People living under stressful conditions are also prone to acne.

What Are The Symptoms of Acne?

The most prominent symptoms of acne are the pimples that appear generally on the face. The most common regions of the face for the acne to appear are the cheeks, the nose and the forehead. However in extreme cases, the pimples could spread to the chest, back and the arms.

Pimples are tiny eruptions on the skin which go away within a couple of days. In some cases the pimples could develop pus in them, which would make them bigger in size and more prominent.

In general cases, the pimples disappear without any trace. But if the pimples are too severe, then they could leave behind a healing scar. Over time, this would make the face very scarred and ungainly in appearance.

How Can Acne Be Avoided?

If acne is caused due to hormonal reasons, there is no way to eliminate it completely. It will pass away when the person crosses his/her pubertal age. But even then, there are many ways to prevent the acne from aggravating and to keep it at a minimum.

The Following Are Some of The Ways in Which Acne Can Be Reduced:

Maintain proper facial hygiene. This can be done by washing the face at least thrice a day. Use lemon soap for washing. It is very important to wash the face after returning home from outside.

How Can Acne Be Controlled With Simple Home Remedies?

There are many household remedies that can be used to control the condition. Most of these remedies are external applications, but some of them are also meant to be taken orally.

Mix the husk of mustard seeds in paste form with cow’s milk. Apply this mixture on the affected areas every night and wash it off thoroughly in the morning. The eruptions should disappear within a week.

Application of buttermilk on the affected regions is also helpful.

Prepare a mixture of nutmeg and red sandalwood in water. Apply this mixture on the face.
Mix the pulp of the neem fruit in water and apply it on the face. This application provides quicker but temporary relief from the pimples.

Application of a paste of thorns of the semolina in milk for three consecutive nights will help reduce the eruptions.

A very simple and cheap remedy is to apply the paste of orange peels on the face.

Indian plum or jambola must be squeezed in water and this paste must be applied on the affected part. This is more effective in the pimples which appear in early youth.

One traditional method to keep acne away is to wash the face twice or thrice a day with buttermilk. This is also believed to increase the glow on the face.