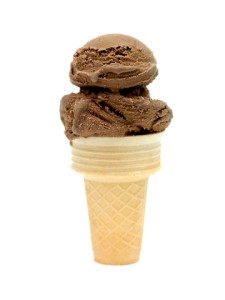 This is a very fast and simple recipe for ice-cream, which I invented when I misread an old Mary Berry recipe – I accidentally missed out the egg yolks, but the end result still tasted good. The reason why it’s so easy is that it doesn’t involve making a custard, as most ice-creams do. The secret to making good ice-cream is basically a matter of getting a decent emulsion of fat and water. I think that this recipe achieves that partly by having a higher fat content than other ice-cream recipes I’ve come across – so beware, large quantities will cause your waistline to expand!

This recipe also has the advantage that it’s safer than other “no-cook” ice-cream recipes I’ve come across, because there are no raw eggs in the recipe (dried egg white is pasteurized), so it can be safely served to children, pregnant women, the elderly and immuno-suppressed, who must avoid raw eggs.

However, like properly made ice-creams it is rich with no detectable ice crystals in mouth feel. The trick is speed – you really can’t afford to pause or loose focus when mixing the ingredients together, or the ingredients will separate, and the egg whites lose their aeration.

It’s also important to have your ingredients at the right temperature. Bring the cream almost up to room temperature by taking it out of the fridge about an hour before starting to make this recipe, or the contrast in temperatures between that and the chocolate can cause the chocolate to re-solidify in lots of little flakes in your recipe (If the container holding the cream still feels cool to the touch, then it’s too soon to start making the ice-cream).

It is possible to make this recipe without an ice-cream maker, but it is a lot more work – you will need to take the carton of ice-cream out of the freezer every ten minutes and give it a vigorous stir with a fork, over a period of about an hour or two, until it is completely set through.

Take the double & single cream out of the fridge to warm up. Make sure your ice-cream maker is ready to use, and have all your equipment handy (you don’t want to have to break off in the middle of making this to rummage in a drawer)

Melt chocolate by the usual method in a pyrex bowl over simmering water, or in a double boiler. When it has melted, add the double cream to the chocolate in the warm bowl, and stir well. Then add the single cream, continuously gently stirring the mixture until it is perfectly even.

Then whisk the egg whites until stiff (and about double the volume) using an electric beater. This will take about 2 minutes. Then add the sugar, little by little, continuing to whisk while doing so.

Then whisk in the chocolate and cream mixture, again, a little at a time, whisking continuously. Put the mixture straight into the ice-cream maker, and follow the manufacturer’s instructions to freeze the ice-cream.

You can make this recipe with any type of chocolate that takes your fancy, but you may want to reduce the sugar content down to about 140g for milk chocolate or 120g for white chocolate to avoid the sweetness overwhelming the flavor of the chocolate. Of course, you can also add other ingredients such as small pieces of fruit, flavorings like mint or citrus oils, spices, caramel sauce, or confectionery pieces to ring the changes. However, if you are adding large quantities of fruit, you will need to use a higher fat cream to avoid getting lots of large ice crystals – I suggest that in this case you use entirely double cream, rather than a mixture of single and double cream. However, be careful with double cream and ice-cream makers – on occasions when my attention slipped, the cream whipped itself into butter, which had a most peculiar texture when eaten!

Joe is a keen amateur confectioner, and runs an online Chocolate Delivery service, Chocolate Now! with her husband Nigel. You can find more of her chocolate recipes at .