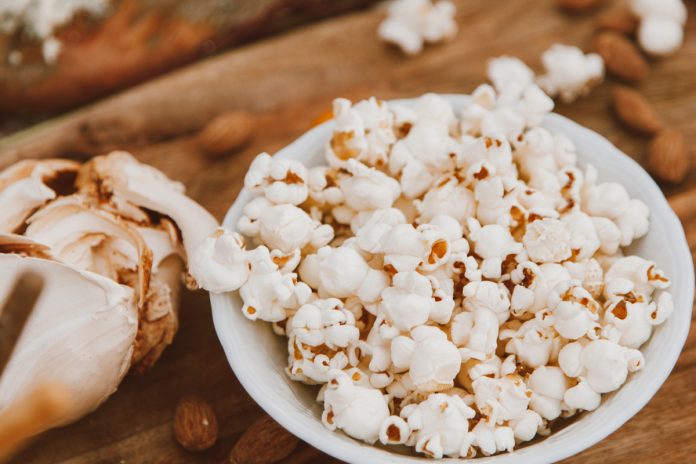 What could be more basic than popcorn? You just pull the bag out of its plastic wrap and pop it in the microwave, right? Sure, if you want to ingest a whole lot of extra chemical “goodies” along with your popcorn. But if you want just the popcorn, oil, salt and butter, you’re going to have to pop the kernels yourself in a pan.

Taking hard popcorn kernels and turning them into fluffy white finger food is becoming a bit of a lost art with most people thinking of popcorn as that package you cook in the microwave. Many microwave popcorn eaters wouldn’t know what to do with ordinary popcorn kernels.

It’s actually quite simple to make popcorn from scratch, but there are a few tricks to it that can make a huge difference in the quality of your snack. First, you need a hot pan and hot oil. The best oil to use is coconut oil. That used to be the oil movie theaters used and it gave movie theater popcorn its characteristic yummy “movie theater” taste. Movie theaters moved away from using coconut oil around the time coconut oil was being vilified as a fattening, artery-clogging oil and vegetable oil was being promoted as the healthy alternative. Vegetable oil today is considerably less expensive than coconut oil, though definitely not better for you.

Take a six quart pan and add generous amounts of coconut oil and put it on the stove. Turn the burner on to a medium setting and give the pan five to ten minutes to heat up. Do not put a lid on the pan as that will result in scorching your oil and you’ll have to start all over, possibly after a call to the fire department for a kitchen fire. Coconut oil has a lower smoke point than butter or vegetable oil, so when you melt it in a pan, you need to leave the pan open and keep an eye on it.

Once your pan is nice and hot, add 1/2 to 3/4 cups of popcorn kernels to the pan, put the lid on the pan and start moving your pan around. You know your oil is hot enough when the kernels start popping almost immediately. The cooler the oil is, the longer it takes for the kernels to pop. It also means that the kernels will get toasted in the oil before they pop, giving your popcorn a burned flavor. If you were to add your kernels to cold oil, the kernels would toast and burn as the oil heated up and very few of them would pop.

As soon as you add the kernels, slide the pan vigorously back and forth over the burner to keep turning the kernels. Listen for the sound of the kernels popping. When the popping slows down, turn off the stove and continue moving the pan. When the popping slows way down or stops altogether, your popcorn is ready. There is a balance between getting the last kernel to pop and keeping the rest of the popped kernels from burning.

Pour the popped corn into a paper grocery sack and put the pan back on the stove. Add generous amounts of raw butter to the pan. There should be enough leftover heat to melt the butter. Pour the melted butter over the popcorn in the bag, add some salt to taste, and vigorously shake the bag up and down to mix it up.

Enjoy your popcorn. It will taste far better than anything you could prepare in the microwave and you will know (and be able to pronounce) everything that is in it.