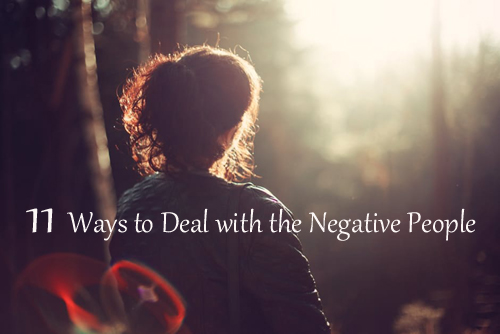 Negative people are everywhere. You cannot expect everyone to have the kind of positive outlook on life and attitude as you do. They just come out and then start ruining your life. Although some aren’t aware that they have negative personalities, others meanwhile are purely mean and awful. One unfortunate thing about negative people is that you can never avoid them. In fact, they are all around you. So the best thing for you to do is to try not to avoid them, instead find ways to deal with them.

One common trait for this kind of individuals is that they love to mess up a good and positive conversation. They either love or superficially don’t understand that they are making other people around them depressed and disappointed. While you may want to completely get out of their way, it simply isn’t possible especially when most of them are close to you, like for instance, your relative, friend, roommate, neighbor, or office mate. Thus, the best remedy for you is to learn these 11 ways to deal with negative people around you.

People who have negative personalities are not born that way. They develop this kind of attitude because of a certain cause. So if you want to know how to properly deal with them, you must understand, dig deep, and find out what caused them to transform. Is it because of a recent problem or issue, an abusive past, or perhaps a behavioral disorder? You have to learn from them in order to deal with them.

Negative people are seen that way because they always attract or go near the opposite minded individuals. If you are a happy, contented, and generally good attitude person, then you are likely to become a subject of interest by negative people. In order to deal with them the right way, you must not go down to their level. Always maintain a positive vibe and attitude and don’t push them!

Try Hard Not to Argue

People who are so negative when it comes to how they see others are very good at what they do, and that is to frustrate, disappoint, and put others on the brink of emotionally heating up. If you’re on the positive side, never push for an argument because no matter how valid yours is, they will always win. Remember that they want you to be angry and depressed. By the time they realize that their negative attitude annoys you, they will be relentless.

One of the most hated actions by negative people is when others tell them what to do. If you come upon a conversation with one, do not assert yourself. What’s wiser is to show empathy especially when they begin to express emotion like anger, hatred, loneliness, pessimism, and other downbeat feelings. You might want to go with the flow and show them that you provide support. Just make sure you don’t show support by scolding. By the time you are able to enter their feelings, they will be able enough to face and solve their own issues.

Be There to Help

People who view their lives as unconstructive are usually emotionally disturbed. The reasons may vary but one thing is for sure – they need help. However, it’s quite hard to lend your hand since they may likely view it negatively. So you have to devise an approach plan of offering help. One that is kind enough for them to accommodate.

The provocative action is the main trigger factor of negative people. When you show them even the slightest glimpse of provocation (though you may view it as more like a joke or humor), they will certainly react to it. So if you enter into a conversation with a negative person, avoid aggravation and stick to certain topics that will not light any fire.

Ignoring Can Be Helpful

We always view tolerance and ignoring some actions as a negative attitude. But when it comes to unenthusiastic people, the best formula for a conversation is to heed their negative comments and then forget them. In simple terms, don’t be affected by them. If you cannot control yourself, you can start a senseless argument.

Bear in mind that negative people do not only view others negatively. They also see themselves as disappointing and unsatisfactory. As a result, they always bring that to themselves and the consequence would be the further alleviation of an emotional problem. If you a member of the family or a close friend is so negative about himself/herself, you must be able to look and find some things that are positive within them. Learn to appreciate the optimistic things they do. Recognize them and praise them for that. This way, you’re helping them build self-confidence, which is relatively absent as of the moment.

Be With a Crowd

When you and the negative person are stuck in a conversation with a crowd, there’s a good chance that he/she deviates from talking negatively. However, you should also be reminded that anyone on the group can be targeted by rude and mean comments. Nonetheless, keeping him/her in the company of a crowd makes him feel sociable and likable to other people.

Watch How You React

The way you react to negative and unhelpful comments may make or break an individual who has a very negative attitude. If you see a friend cursing herself, you don’t have to curse him more. If your mom scolds you for nothing, be calm and don’t react violently. Most of the time, bad arguments are spurred by negative people who find pleasure in seeing others react they way they want them to.

If All Else Fails, Find an Exit

Living or being near with someone who’s very negative is depressing and stressful. However, this doesn’t mean that you avoid them the minute you see some signs. What you need to do is try to help them, especially when they mean something to you or perhaps they are part of the family. Nonetheless, if all else fails and you think you’ve done enough to provide support, it’s practical to avoid them as much as you can.

is a blog that helps people understand and deal with other people around them.