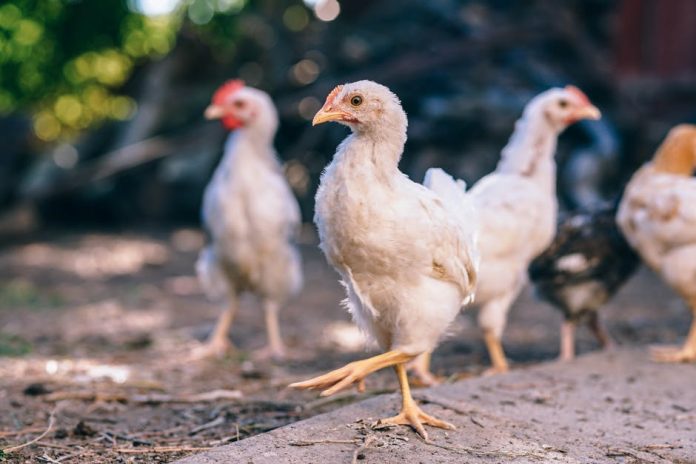 Adding new chickens your flock of birds can be tricky, but it’s not impossible. Every flock will have a period of adjustment, but with thoughtful planning, fighting can be kept to a minimum (in most cases). The goal is to have a happy, well-adjusted flock in the end, (with no blood shed or lost life). It is possible! First of all, it’s important to understand ‘chicken psychology’. If you understand how your birds tick, it will help you work with their natural inclinations instead of against them.

The term ‘pecking order’ isn’t just a cliche’. It doesn’t take watching chickens for too long to see that there is a very distinct ‘animal hierarchy’ that is established in the flock. If you have new chicks this establishment will happen as a normal course of their growth and development.

The pecking order determines who is the top chicken, who is at the bottom and where all the other chickens fit in between. Once this order is determined, it rarely changes as the lower chickens are generally too scared to challenge a chicken higher than them. This pecking order keeps the peace in the flock. It establishes who gets to eat first, who gets to sleep where, whose hens are whose (in the case of a rooster), etc.

The 2nd issue to understand about chickens is the idea that this is ‘their turf’. They’ve established a (fairly) peaceable kingdom and each member of the flock knows their place. Letting new chickens invade their space feels just like that–an invasion.

New Girl in the Flock

The best thing, of course, it to get all your chicks at one time and raise them together. But, there are times when adding new chickens to your flock is impossible to avoid. There are untimely deaths, old age, or a number of other factors that might make you consider buying a few new chickens. If you decide to take the leap and add more chickens, keeping in mind the pecking order and the ownership issues your chickens have over their home will help you in understanding their behavior.

When introducing new chickens to the flock, it’s much easier on all concerned if you are adding at LEAST 2 new chickens to the mix. And even better if the new chickens already know each other and are ‘friends’. This does two things: first, it keeps the new chicken from being completely isolated (she’ll have a friend), and second, there will be more than one chicken that is the brunt of the ‘bullying’ so it kind of spreads out the picking.

Pick on Someone Your Own Size!

Chickens LOVE to pick on the smaller, the weaker. They don’t play fair. So, if you’re planning on bringing new chickens into the flock, try to get them similar in either age or size, to help minimize the uneven fight. For example, if you have 5 full grown hens and decide you want to get 2 new baby chicks–stop now! Don’t throw those babies in with the other hens if you want to keep them alive.

A better way to do it would be to get MORE new chicks than old hens and OVERWHELM the new flock with the younger birds–but don’t add the younger ones until they’re big enough to stand a chance at a fight.

(An exception to this is when a mother hen raises babies herself. SHE is their defense. And just like ANY good mother, she’ll instinctively fight to the end for her children.)

One of the best ways to introduce new chickens to your flock is to do it slowly. If at all possible, place your new chickens NEAR your old chickens, but not WITH them. For example, when I introduced 2 new chicks to my flock, I placed them in an upside down crate inside the hen house. My chickens could see and interact with the new girls, but they were blocked from being aggressive because they couldn’t quite get to them.

All the chickens could observe each other from a close, but guarded, distance. And it seemed, also, that the crate in the middle of the chicken coop caused more curiosity not the feeling that their turf was being invaded.

In the meantime, stage some introduction ‘play date’ times for your flock. If you have a run, or yard, bring your old chickens out to meet the new ones, but stay nearby to break up any particularly brutal fighting (you don’t want to break it all up, as there is the re-establishing of the pecking order that will naturally occur, but you also don’t want a bloodied pulp or dead chicken on your hands.)

Plan these meet and greet sessions a couple times a day, after the first day (where they’ve already had time to get to know each other with a barrier of some sort between them), and every day that you have them separated from each other.

Other Odds and Ends

People report many tricks to help ease the transition of adding new chickens. Here are some of the ideas they report:

1. Add the new chickens at night (in the dark) after your flock has gone to sleep. When they wake up in the morning they’ll be less aware of new chickens on the premises.

2. Place both the old and the new in an entirely different location. This throws the old chickens off balance (they’re not defending their own stomping grounds) and they are less defensive.

3. Take some old chickens out as you add new ones–this disrupts the pecking order. This is how I added some new chickens–I found out I had a rooster (even with sexed chicks you have a slight chance of getting a rooster instead of a hen), so I found a farmer who would take “Lizzy” and I swapped him with 2 new hens. This threw the pecking order off a bit and helped ease the new girls into the flock.

4. Treats and distractions. I’ve heard of someone who would hang a treat (like a head lettuce) in the chicken coop–just above the reach of the chickens–and that distraction helped introduce the new chickens easier. Others who have said that feeding the chickens treats at the same time as the introductions also helps some.

Prepare for Jockeying for Position

Even in the best handled situations, there will be some fighting. That’s just how it works. New chickens means a new pecking order needs to be established. And in the process, the top chickens will need to show themselves strong.

Pay attention to the process enough to make sure the chickens are not being hurt too badly. If a chicken is picked on enough that blood is drawn, remove the chicken from the flock before it gets pecked to death. After a week or so the whole transition and positioning should work itself out and you will (hopefully) be back to a fairly peaceful, happy flock.

Kerrie Hubbard lives in Portland, Oregon with 10 chickens, 1 cat and several small raised bed gardens. Her website, City Girl Chickens ( http://www.citygirlchickens.com ) is an urban guide to raising chickens in your backyard or other small spaces.