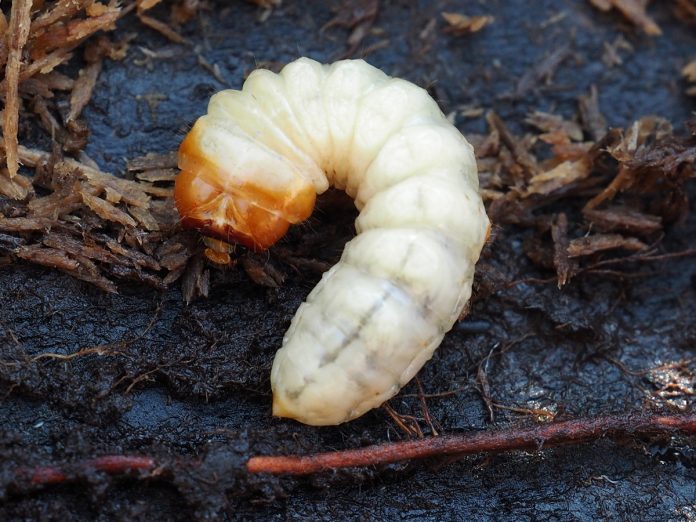 Beetle grubs can turn a fine looking lawn into a patchwork quilt of yellow spots. But before you reach for the insecticide bottle, there are a number of organic alternatives that will help you cope with the grubs without poisoning yourself or your family.

What Are These Grubs?

The grubs that you see in the lawn are the larvae of Japanese beetles, June beetles, and chafers. These grubs are C-shaped, off-white in color with a dark head. They eat the roots of grass, causing the grass to die and form brown patches. Lawns that are heavily damaged by grubs will have a yellowish tinge and will feel spongy when walked on. The sod itself can be easily lifted, a sure sign that the brown patches were not caused by dog urine.

Adult beetles emerge, mate, and lay eggs from late June until early August. The eggs hatch in about two weeks and the tiny grubs grow quickly. The yellowing patches of sod usually appear in late August and September, when the grubs are vigorously feeding and the turf is otherwise water-stressed. In October or November, when soil temperatures begin to cool, the grubs stop feeding and move deeper into the soil, where they spend the winter. They return to the root zone and resume feeding early the following spring.

Just a couple grubs per square foot are not a problem to an otherwise healthy lawn. Ten or more per square foot are necessary to justify treatment. Predatory nematodes are available for use in Canada and the US as a biological control for white grub. The use of these nematodes requires that the soil be kept very moist and it is very important that the application instructions for this product be followed closely, as nematodes are living organisms.

Treat the entire lawn. Do not attempt to control lawn pests by spot applications. Water the lawn thoroughly after application to wash in the nematodes.

When To Treat The Lawn?

Certain species of wasps parasitize white grubs. They are sometimes seen hovering over the turf in late summer in search of green June beetle grubs on which to lay their eggs. They are not aggressive and normally will not sting people. The wasp larva feeds externally upon the grub, eventually killing its victim before spinning a fuzzy, brown, jelly bean-size cocoon in the soil. Predators such as ground beetles and ants also take their toll on eggs and young white grubs.

Managing Your Lawn To Minimize Damage

Lawns that are heavily managed and watered regularly may actually attract beetles. They prefer grassy areas where the soil is constantly moist such as lawns, pastures, and meadows in close-cropped grass. Frequent irrigation in June and July may attract egg-laying female beetles to the turf, especially if surrounding areas are dry.

In contrast, adequate soil moisture in August and September (when grubs are actively feeding) can help hide root injury. If grub damage starts to appear in late August or September, watering will promote tolerance and recovery. Deep, periodic soaking of the turf is more beneficial than frequent, light watering.

University of Florida Factsheet – Microbial Insecticides
http://edis.ifas.ufl.edu/BODY_IN081
A great overview of the advantages and disadvantages of using nematodes, Bt, and other biological insecticides.

Arzeena Hamir is an agronomist and garden writer based in Vancouver, BC. When she’s not planting peas or harvesting zucchini, she runs Terra Viva Organics