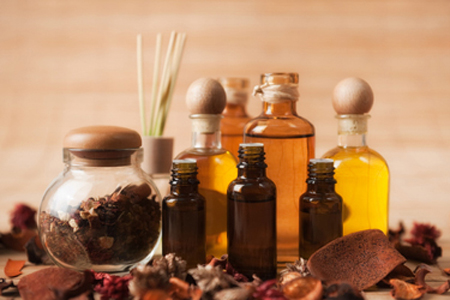 New methods of essential oil extraction are entering the mainstream of aromatherapy, offering new choices in oils never before available. With the new labels of ‘CO2’ and ‘SCO2’, along with the traditional ‘steam’ and ‘hydro’ distillations, ‘absolutes’, and ‘cold pressing’, a little education for the aromatherapy enthusiast can go a long way in essential oil selection. Is one process better than another? Does one produce a nicer smelling oil, or one with greater aromatherapeutic value? It turns out that essential oil production, like wine making, is an art form as well as a science. The value of the newer processing methods depends greatly on the experience of the distiller, as well as the intended application of the final product. Each method is important, and has it’s place in the making of aromatherapy-grade essential oils.

Steam distillation, the most common method of essential oil production, involves the flow of steam into a chamber holding the raw plant material. The steam causes small sacs containing essential oil to burst. The oil is then carried by the steam out of the chamber and into a chilled condenser, where the steam once again becomes water. (Hydro-distillation is a similar process where the plant material is boiled, with the resultant steam being captured and condensed). The oil and water are then separated; the water, referred to as a ‘hydrosol’, can be retained as it will have some of the plant essence. Rose hydrosol, for example, is commonly used for it’s mild antiseptic and soothing properties, as well as it’s pleasing floral aroma.

A number of factors determine the final quality of a steam distilled essential oil. Aside from the plant material itself, most important are time, temperature and pressure, and the quality of the distillation equipment. Essential oils are very complex products; each is made up of many, sometimes hundreds, of distinct molecules which come together to form the oil’s aroma and therapeutic properties. Some of these molecules are fairly delicate structures which can be altered or destroyed by adverse environmental conditions. So, much like a fine meal is more flavorful when made with patience, most oils benefit from a long, slow ‘cooking’ process.

The temperature of the extraction chamber cannot be too high, lest some components of the oil be altered or destroyed. The same is true of the chamber’s pressure. Lavender essential oil, for example, should not be processed at over 245 degrees F and three pounds per square inch of pressure (3 psi). Higher temperatures and/or pressures result in a ‘harsh’ aroma – more chemical than floral – and lessen the oil’s therapeutic effects. Also, the extraction period must be allowed to continue for a certain period of time in order to flush ALL the oil’s components from the plant, as some are released more quickly than others.

Despite the drawbacks of aggressive processing, high temperatures and pressures are often used to produces large quantities of oil in a short period of time. These oils are usually destined for use in cosmetic and processed food manufacturing, but are sometimes sold to final consumers as essential oils for use in aromatherapy. These oils will be less expensive, but are of limited therapeutic value, and the difference is apparent when the aromas are compared side-by-side.

Some plants, and particularly flowers, do not lend themselves to steam distilling. They are too delicate, or their fragrance and therapeutic essences cannot be completely released by water alone. These oils will be produced as ‘absolutes’ – and while not technically considered essential oils they can still be of therapeutic value. Jasmine oil and Rose oil in particular are delicate flowers who’s oils are often found in ‘absolute’ form.

The processing of an absolute first involves the hydrocarbon solvent extraction of a ‘concrete’ from the plant material, a semi-solid mixture of typically 50% wax and 50% volatile oil. The concrete is again processed using ethyl alcohol (the same alcohol found in beer, wine, etc.) in which the wax is only slightly soluble. The volatile plant oil separates into the alcohol and this mixture is removed. The alcohol is then evaporated and the result is an almost pure plant extract – depending on the care taken in the evaporation process, sometimes 2% or less of the ethyl alcohol may remain. The use of solvents in the extraction process notwithstanding, absolutes can have incredibly deep and complex aromas.

These carbon dioxide methods have a couple of advantages: Like steam distillation, there are no solvent residues left behind, and the resultant product is quite pure. Like solvent extraction, there is no heat applied to the plant material or essential oil to alter it in any way. The oil produced is very accurate with respect to the original state of the plant. The CO2 methods also are the most efficient, producing the most oil per amount of plant (one of the reasons for the high cost of essential oils is the low yield of oil from most plants – one ton of Rose petals produces less than 1 pound of oil, for example). The efficiency of CO2 extraction is particularly important when rare or endangered plant species are involved, such as Indian Sandalwood oil – less of the precious plant is needed to produce an equivalent amount of oil.

Finally, there is the ‘cold pressing’ of citrus oils from the peels of fruit, as is done with Bergamot oil, Orange oil , Lemon oil , and the like. This method involves the simple pressing of the rind at about 120 degrees F to extract the oil. Little, if any, alteration from the oil’s original state occurs – these citrus oils retain their bright, fresh, uplifting aromas like that of smelling a wonderfully ripe fruit.

Which Method is Best?

CO2’s, with some obvious advantages, are not always the best choice for a particular need. They still are the most expensive, despite their higher yields. The resultant product differs slightly compared to one produced another way – the oils produced by steam distillation of some plants may sometimes be found to have a more agreeable aroma. Patchouli oil, for example, seems to benefit from the steam distillation process by becoming a little warmer and richer. Many other essential oils are quite effectively produced via steam distillation, with little alteration from the original plant state. Oils from other plant species do seem more ‘complete’ with CO2 processing, with Frankincense oil and most of the ‘spice’ oils being good examples where a little something special is present in the aroma. This likely translates to greater therapeutic properties.

Producing essential oils of aromatherapeutic grade is skill requiring years of experience. It takes the work of a dedicated artesian at every step, from growing and harvesting to fine-tuning the distillation process, to produce a truly fine oil. The making of a fine essential oil relies far more on knowledge and experience than it does on the particular extraction method. There are, however, legitimate reasons to select one distillation method over another – some plants simply require a particular process to produce a fine oil, and the oil needed for a particular application may only be made by one process. In the end, as is often the case in aromatherapy, your own sense of smell can tell you which oil will work best for you.

Misty Rae Cech, ND, is a naturopath and yoga teacher practicing in Boulder, Colorado. She enjoys pure essential oils, using aromatherapy in conjunction with other natural therapies. More can be found at the Ananda Apothecary, http://www.anandaapothecary.com