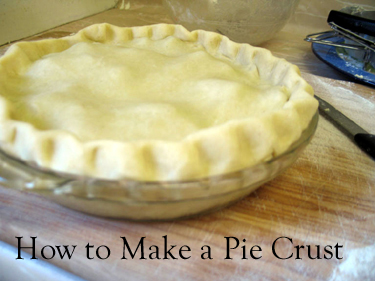 To bake a pie, start with your favorite recipe or use the pie crust recipe below. Then, use the following directions to roll out and bake a pie crust. Start with a flattened piece of dough that has been tightly wrapped in plastic and refrigerated until firm, at least 1 hour or up to 2 days.

Step 1 — Place the unwrapped disk on a well-floured work surface. Dust your fingers, rolling-pin and dough with flour. Roll out the dough, working from the center toward outer edge, rolling clockwise around the disk to form a 12-inch circle about 1/4-inch thick. (You could draw a circle on a pastry cloth 1 inch larger than pie pan. Roll dough within the circle.) If edges split, pinch together. Always roll from center out to edge. Use light strokes. 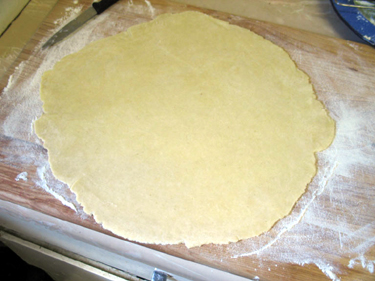 Step 2 — Place a floured rolling-pin in the center of the dough and fold the edge closest to you over the pin. Lift the pin, gently drape the dough over the pie plate and unroll it so that it covers the entire plate.

Step 3 — With floured fingertips, gently ease the pie dough into the bottom and sides of the plate. Using scissors, cut the dough along the edge, leaving a 1-inch border.

Step 4 — Fold edge of dough underneath itself to create a thicker half-inch border that rests on the lip of the pie plate. To crimp the edge, use the index finger of one hand to press the dough between the thumb and forefinger of the opposite hand; repeat around the edge of the dough. A pretty edge puts the ideal finishing touch on your favorite pie recipe. Refrigerate for at least 20 minutes and up to 2 days before filling so that the crust does not shrink. (It does make a big difference!) 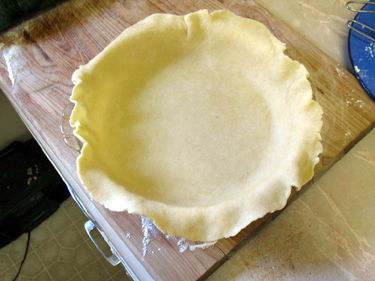 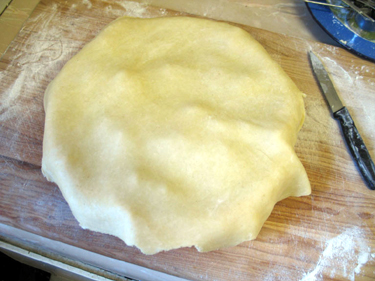 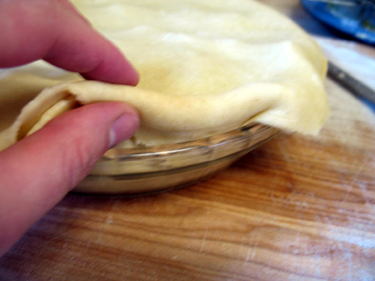 Step 5 — Heat oven to 375 degrees F and blind bake crust, especially if you use a runny or an uncooked cream filling. There are two methods of blind baking, docking or using pie weights. Dock the crust when making simple cream pies. Docking is pricking the crust with a fork so the steam will escape and the crust will bake evenly. However, if the filling is quite runny it will seep into the holes made in the crust and make it soggy. Blind baking with pie weights will result in a crispy crust. Cover the pie crust with parchment (baking) paper or aluminum foil. The foil should be greased where it touches the pie dough and you may still have problems with the foil sticking to the crust. Before baking, pour dried beans or rice into pie pan at least halfway up sides of crust. (Pie weights could be purchased to use instead of beans or rice.) Bake partway in a hot oven until crust is lightly browned and has dried somewhat. Then, remove pie weights and finish baking until crust is firm and golden brown. (If crust has puffed up in some places, just push it down with your fingertips as you are removing pie weights. This might also be the time to remove crust from oven and pour in runny filling like pumpkin and other custards.) If edges of crust are getting too brown, it may be covered with foil in the last part of baking. Happy baking!

Sprinkle water, a tablespoon at a time, over part of mixture. Gently mix with fork; push to one side of bowl. Sprinkle next tablespoon water over dry part; mix lightly; push to moistened part at side. Repeat until all is moistened. Gather up with fingers; form into ball. Let stand several minutes.

Divide dough in half and form each piece into ball. (Proceed according to the instructions outlined above.) 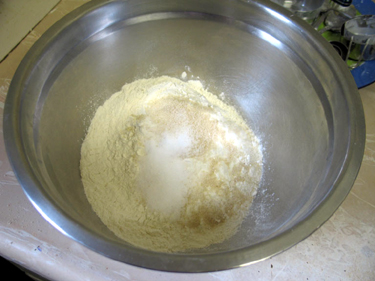 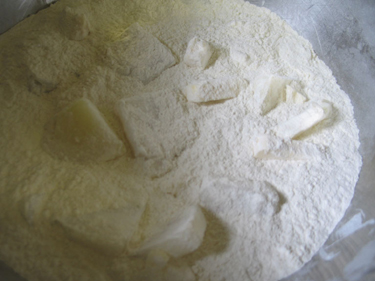 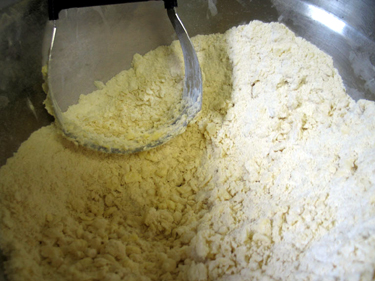 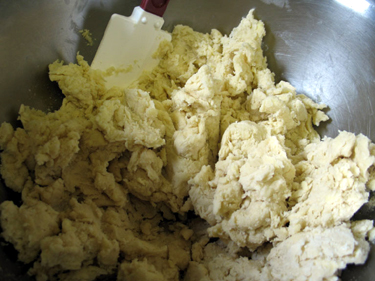 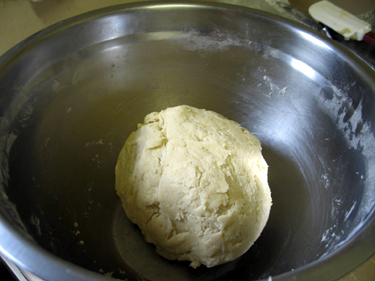 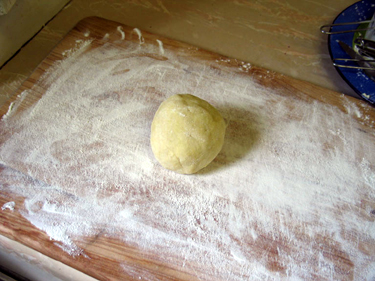 Hi, I am Betty Trobaugh. I really enjoy cooking, especially baking. I don’t make as many rich desserts these days but I still enjoy baking and cooking for my family and friends. I want to continue sharing my love of cooking and baking. I also want to learn all I can from others who have a like passion and I certainly would enjoy hearing from you.