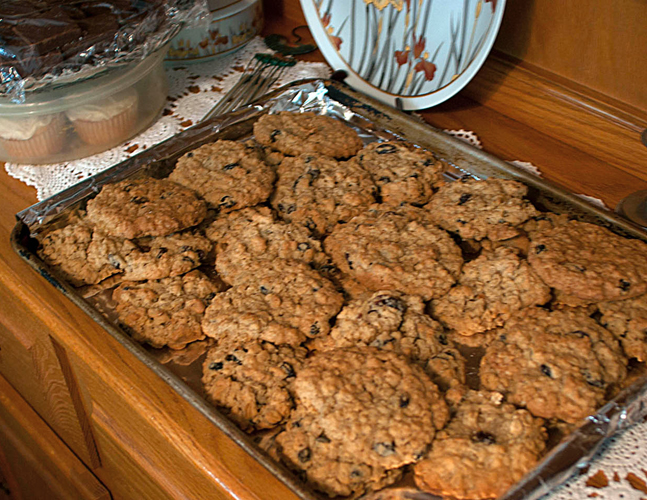 It’s hard for me to believe, but April 1, 2009 marks the 100th anniversary of my grandmother Elizabeth Rose von Hohen’s birth! When you think about 100 years going by, especially this past 100 years, it’s mind blowing to think of the changes she witnessed. As a little girl Elizabeth would take the reins of the cart and ride down a long narrow lane to the country road which lead to the farm where she would pick up milk for her family. She took pride in the responsibility given to her at such a young age. Ten decades later this little country girl now has a new website to honor her and to offer her Grandmother’s Cookbook ~ comfort foods made with love. I am so proud to have had such a wonderful grandmother and even more proud to have the opportunity to share her stories and recipes with the world!

I am excited to share with you two healthy recipes which have been in our family well over 100 years. They are Hungarian Peasant Meal and Oatmeal Cookies, both brought here from the old country by my great-grandmother, Anna. The Hungarian Peasant Meal is a dish I was unaware of until we started putting our cookbook together. My mother told me it was a staple for their family back in the 1930s and 1940s because it was inexpensive. She said she has vivid memories of my grandfather putting a big lump of butter on the boiled red potatoes. He would then break off a piece of potato and take a scoop of the cottage cheese mixture and pop it into his mouth! Delicious! This is so yummy ~ you just have to try it! It is quick and extremely easy to make. In fact, this is the perfect recipe for a beginner to try.

One thing we had lots of times for dinner was this meal. My mother told us in the old country they called potatoes “feld hendles,” field chickens, as they took the place of meat.

Boil 6 to 12 medium red new potatoes in their jackets in salted water for about ½ hour or until soft. They are done when a fork easily goes into the potato. Mix 1 pound of cottage cheese with a sprinkle of salt, pepper and paprika. Add a heaping tablespoon of sour cream and ½ cup chopped scallions. Toss cottage cheese mixture together and sprinkle with paprika.

Serve potatoes in their jackets. We just peeled them on our plates, sprinkled with salt and pepper and a lump of butter. Serve with two or three heaping tablespoons of the cottage cheese mixture. Delicious!

Cream together sugar, butter and eggs until light and fluffy. Add flour, oatmeal and baking soda. Add nuts, raisins and coconut. Mix well. Drop from a teaspoon on a greased cookie sheet. Bake for 10 to 12 minutes at 350 degrees.

This recipe makes a big batch of cookies. They are so delicious you’ll find yourself eating a handful at a time!