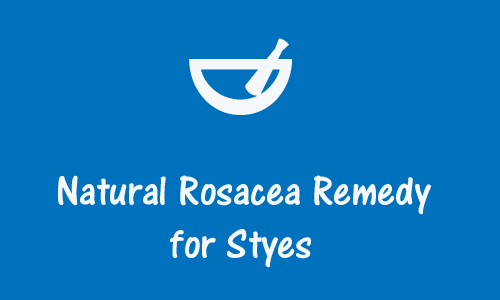 Like many rosacea sufferers my symptoms developed in my teens when my face was prone to flushing a bright red whenever I became embarrassed, was told off, or took part in physical exercise and sports.

This was later to develop into full blown rosacea in my early thirties when the redness would appear on my cheeks and nose and last for several weeks at a time. I do not know why I got rosacea but I have the typical traits of most sufferers. I live in the western world (in England) and have very fair skin. It is estimated that around 1 in 10 people have rosacea although many do not realize it. In the USA alone, there are believed to be 13 million sufferers.

As well as the redness on the central part of my face, I also had another flare up connected to my rosacea affecting my eye which is on the whole less common. Periodically, one of my eyelids in particularly, would swell up and a day or so later a stye would develop. This would become quite sore and extremely unsightly and although I initially tried using ointment purchase from the chemist to reduce the swelling and eradicate the stye I found a natural and far cheaper way to combat this rosacea symptom.

Here it is in three simple steps:

1. Place a teaspoon of bicarbonate of soda into a cup and add a small of amount boiling water. Stir thoroughly.
2. Take a clean flannel and allow to soak up some of the liquid. As hot as you can stand it place the flannel on the stye.
3. Repeat this process 5 or 6 times.

Approximately 15 minutes later you will notice that the stye will start to dry up. A white residue may appear around your eye (as a result of the bicarbonate of soda) which can be simply washed away. You may have to repeat this process the following day but I find that this method gets rid of my stye problem almost overnight.

J.J. Eastwood – For more of my secrets for dealing with rosacea please visit http://acnerosaceatreatments.blogspot.com