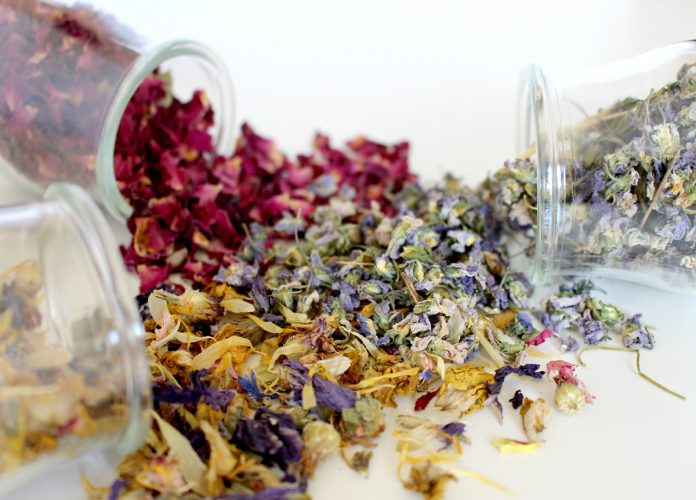 Today many of us enjoy having the fresh fragrances of potpourri in our homes and work places to enhance our overall enjoyment but did you know that originally it was a necessity?

Castles were responsible for the creation and evolution of potpourri. Castles were designed with narrow slit windows to prevent fire balls, arrows, stones etc from entering the castle and as a result the castle itself tended to be damp, dark and have a very undesirable musky smell throughout.

The rooms in the castle were often strewn with herbs so the inhabitants would have a delightful aroma in each room as they walked. If not the rooms were very nasty smelling with that dusky smell which was offensive to most. The herbs had to be swept up often as once the essential oils had evaporated then the herbs themselves starting decaying and became part of the problem.

How to Make Potpourri – Instructions and Recipes

Generally in the bottom of the castle was a room called the “rotten pot room”. In this room were very large, up to 7 feet, jars or pots. Inside the pots/jars the potmaster would put in herbs/spices and several cups of brandy or other spirits and craft fragrances in the rotten pot room. Some of these fragrances were crafted for seasonal use such as more flowers for spring, more spices for fall etc. Some pots sat and fermented for literally years before the correct fragrance evolved for the potmaster who was setting the history for perfumery.

Once the pots had achieved the correct fragrance then they would be transported to the different rooms in the castle to stay there and add a delightful aroma to that room thus overcoming the natural smells that evolved in the castle. It was not unusual for these wet potpourris to last for 10 years or more with occasional refreshing with spirits to aid the evaporation and wafting of the aroma in the room. The pots would be capped at night or during different times of the day to preserve the aromas.

Now you know a little more about that glorious term we use called potpourri but henceforth between us we’ll keep the secret it’s really nothing but a “rotten pot”!! (:)

Herbanite Bob is cofounder along with his wife of Herbfest. The 10 day festival is held in Wake Forest, N.C. each spring and attracts over 20,000 attendees. A free herbal lore and legend etips email is sent weekly with interesting trivia about herbal lore and legend. The free service is available on the web site, http://www.herbfest.net

The Ultimate Guide to Extending the Life of Fresh Flowers

How to Cut Flowers for Display