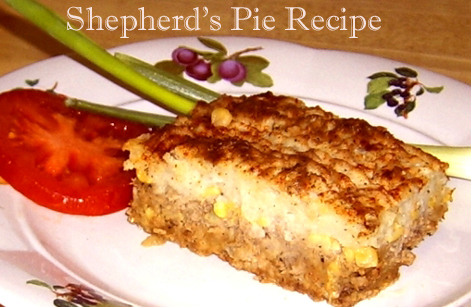 Traditional nursery food has made a come back in our family recently. I haven’t bothered making shepherd’s pie (or cottage pie, as it is also known) for ages, as the children just used to eat the potato from the top and leave the mince. Mince in general has been rejected too. If I use the same minced beef to make meatballs or burgers the kids devour it, but they hate picking out all the little bits of vegetables that I hopefully put into it, when I make the shepherd’s pie, in the hope of smuggling a few vegetables into their diet. Anyway my son actually requested shepherd’s pie the other day, so yesterday I made it and they gobbled it up, vegetables and all, several servings each, so I’ve gained one more dish for the regular list.

Kit Heathcock – worked and travelled in Italy for many years, is passionate about food and loves being a fulltime mother. Co-creator of A Flower Gallery home of original flower pictures and Food and Family recipes and kids’ stuff. http://www.aflowergallery.com