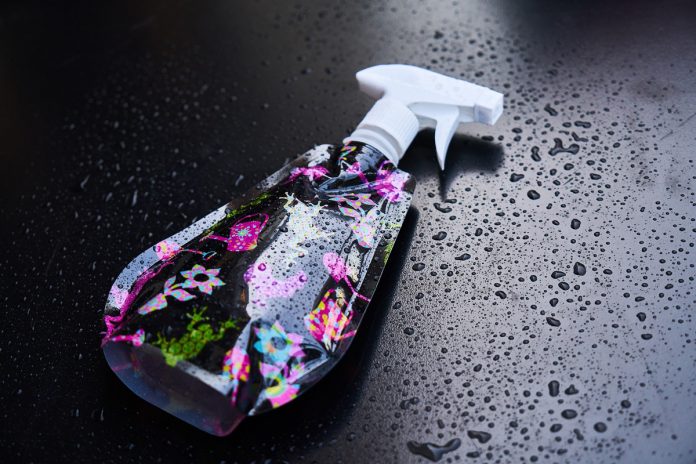 Shower spray products such as Tilex work very well to prevent buildup of calcium carbonate in showers and tubs and they are convenient to use but they are very expensive, ( about $5.00 per qt. ) You can make your own for much less money. You will need:

[1] Distilled water. Some people say De-Ionized water is just as good as distilled but I don’t believe it, use distilled.

[2] Pure ammonia. Most of the ammonia you see in the stores has additives such as lemon scent etc. You want just ammonia (ammonium hydroxide). Here’s how to tell: pick up the bottle and shake it. If it forms a layer of suds on top, it has additives, don’t buy it. Many supermarkets don’t have pure ammonia, you might have to go to a hardware store or janitorial supply.

Fill a one quart spray bottle about ½ full of distilled water. Add one ounce of ammonia and 2 ½ ounces of vodka ( or 1 ½ ounces of 70% rubbing alcohol ). Add more water to make one quart total. Since you’re probably buying the distilled water by the gallon, it might be easier to mix the solution one gallon at a time in the water bottle. Just multiply everything by four.

Spray the solution on the shower walls and curtain or door as soon as you finish the bath. Don’t wait till the water starts to dry. You don’t have to dry the walls or anything, just spray and leave it.

The ammonia in the spray can be irritating to eyes, nose, and throat. If you are sensitive, don’t do this in a closed shower stall. If your shower already has a buildup of calcium, this method will take it off but it might take several months. It’s faster to scrub it with white vinegar.

This solution can be used for other cleaning jobs also, such as a general de-greaser and for windows. It will also kill odors in the garbage can.

Green Spring Cleaning Ideas That are Kind to Mother Nature

10 Spring Cleaning Tips for Your Kitchen