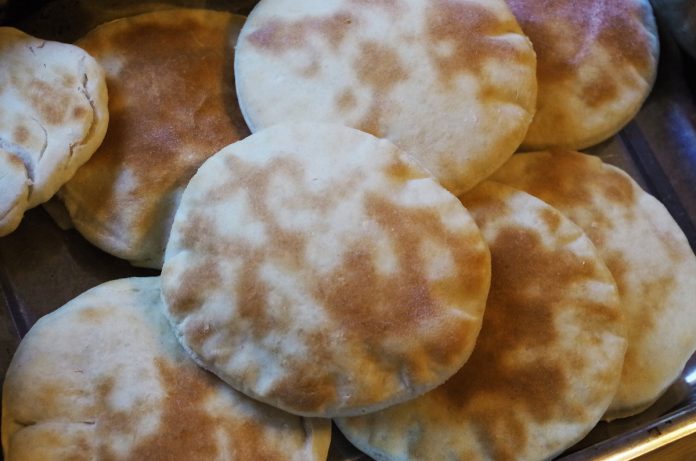 This being from the Middle East, one of the most common breads is also one of the oldest and one of the simplest breads around. Of course I am talking about the ubiquitous pita bread which surrounds everything here from the equally ubiquitous felafel, to hummous and tehina, and grilled meats of various forms. Add to that all the wonderful salads (sometimes called mezze in Arabic or is it Greek?) and you see what I mean. They’re everywhere and wrapping everything.

Pita, with some variations, is local peasant’s bread in every country of the Middle East. In some countries, like Turkey for instance, about one third of the flour is typically whole wheat. In other countries, like some North African countries the pita is really a flat bread. Sort of like a soft, slightly fluffy tortilla. In Israel this flat bread is called a laffa. Except in Jerusalem where it is called locally, aish tanur literally ‘fire in the oven’. It is delicious everywhere.

This recipe makes 8 pita breads and is pretty easy to make. The trick is in the oven, not the recipe. Don’t forget that pita is peasant bread and in many places it is baked outdoors in (or even on) a stone oven. That means the temperatures are very high, and the baking times are short. When the bread is baked (literally cooked) on a taboon (a domed oven with the fire inside) the bread dough is slapped flat onto the oven and becomes a wrap. When it is baked in the oven, the high temperatures cause it to ‘pop’ and thus creates the special pocket.

Don’t despair just because you don’t have a hand-carved stone oven in your backyard. The taboon can be duplicated at home in a regular home oven. Just make sure the temperature is high, 500 F or around 250 C, and you bake on or near the floor. After baking, keep the breads covered or they will dry out very quickly.

From start to finish it will take take less than an hour and in the end you will have about 8 fluffy, soft pita breads. Yum!!

Mix in 1 cup of flour and then slowly add the remaining flour, 1/2 cup at a time, until dough can no longer be mixed with wooden spoon.

Turn dough onto floured board. Knead dough for about 5 minutes, adding flour when necessary to create a soft dough.

Divide dough into 8 equal parts and form into balls. Keep dough balls on board and cover to rise for 20 minutes.

Move oven rack to the bottom setting. Preheat oven 500 degrees F. If you have a baking stone place it on the floor of the oven and let it heat with the oven. Otherwise, place your baking sheet in the oven so that it is hot when you place the dough on it.

After the rise, flatten each dough ball with your hand. Use rolling pin to roll each dough ball so that it is a 1/4 inch (about 6mm) thick and about 5 inches (about 12.5 cm) across.

Place two rounds on the baking sheet or baking stone and bake for about 8 minutes or until puffed. Remove from oven, using a metal spatula, and place the next two rounds in oven.

After each pita has been baked, poke a hole in it with the corner of the spatula and flatten. While you are baking, keep the baked pita covered with a clean kitchen towel because they dry out very quickly.

Pita breads can be placed in bags after they are completely cooled and stored in the refrigerator for up to a week. They’ll keep in the freezer for up to a month but double bag them. Defrost, covered with a towel to room temperature.

They really are simple, quick to make and so much better than the store-bought. Enjoy!