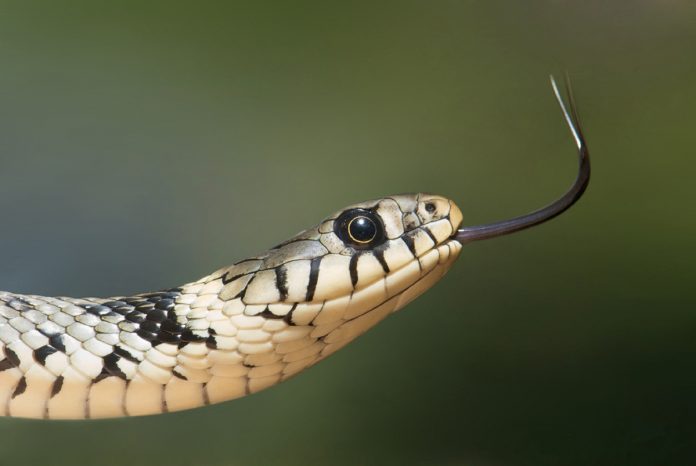 During the early 1800s, lands in Highland and Ross Counties, Ohio, along Paint and Rattlesnake Creeks, were sold by veterans of the Revolutionary War who had been granted them as war bounties. Settlers moved in, attracted by the opportunity to purchase 150 or more acres. They were hoping to acquire enough land for their children to settle around them, also. These early settlers discovered that their new paradise had unwelcome residents: spotted rattlesnakes. One pioneer reported killing eighty-four snakes in one day, when the creatures had emerged from their winter dens.

One pioneer family, the Carlisles, had a memorable encounter with Rattlesnake Creek’s namesake, according to Highland County history. Their cabin had been built without windows and had been thoroughly chinked, eliminating any light. The family spent the days outside in good weather and only entered the cabin to sleep. Candles and oil were too expensive to waste merely to light their way to bed, so the family felt their way inside one evening. The daughter of the family went to bed after a discussion about snakes and felt something moving beneath her pillow. She was told it was her imagination, due to the conversation before bed, but she insisted something, either a rat or a snake, was there. She started to sit up, and something struck her head like a whip. She leaped up, screaming that she had been bitten by a snake. The snake rattled, and the entire family scrambled out of bed. Luckily, she had not been bitten, only struck with its tail as it tried to escape the pillow. They heard the snake rattling as it crawled toward a corner of the cabin, and in the pitch darkness pursued it until they were able to kill it in the yard. The idea of this family dealing with a deadly reptile in the dark reminds us of what a tough people these pioneers were.

Local pioneers turned their livestock loose to graze on the thick grasses near the creeks. When the time came to bring the animals home for work or for milking, a boy or young man would hurry out through the tall grass to fetch them. He would be barefoot or shod only in low moccasins and was understandably wary of the rattlesnakes along his route. The boy listened intently for the sound of his own cows’ or horses’ bells and leaped from log to log in an attempt to avoid the grass where snakes could be lurking. Once he reached his stock, he could ride one back safely to the homestead. Unfortunately, several of the area’s settlers were bitten and, unless they could get treatment quickly, often succumbed to the snakes’ venom.

Pioneers of Highland and Ross Counties, Ohio, found that spotted rattlesnakes did not make good neighbors. For many years in the early 1800s, men and women were forced to keep a sharp lookout for these deadly reptiles.

Donna Gruber Adair is a former teacher of high school English and creative writing, with a degree in history. Her short stories and poetry have won awards. Her new book, An American Odyssey, is available at Amazon.com.