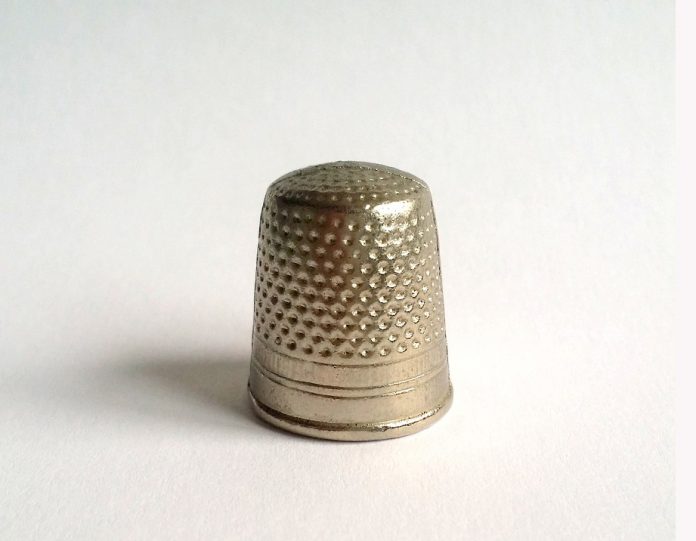 A thimble is a protective shield worn on the finger or thumb generally worn during sewing.

While collecting thimbles became popular in the mid 1800 as a result of the special thimbles that were made for the Great Exhibition held in the Crystal Palace in Hyde Park, London, the earliest known thimble was Roman and found at Pompeii. Made of bronze, it has been dated to the first century AD. A Roman thimble was also found at Verulamium, in the UK. and can be seen in the museum there.

The first thimble made in England was in 1695 by a Dutch metal worker named Lofting. It was called the ” thumb-bell,” because it was worn on the thumb when in use, and shapped like a bell. The shape eventually changed, but the name, softened into thimble, still remains.

Thimbles are usually made from metal, leather, rubber, wood, glass, or china. Early thimbles were sometimes made from whale bone, horn, or ivory. Advanced thimblemakers enhanced thimbles with semi-precious stones to decorating the apex or along the outer rim. Thimble artists would also utilize enameling.

Originally, thimbles were used solely for pushing a needle through fabric or leather as it was being sewn. However they have since gained many other uses and mythologies. In the 1800s they were used to measure spirits (hence the phrase “just a thimbleful”). Women of the night used them in the practice of thimble-knocking where they would tap on a window to announce their presence. Thimble-knocking also refers to the practice of Victorian schoolmistresses who would tap on the heads of unruly pupils with dames thimbles. Thimbles have also been used as love-tokens and to commemorate important events. A miniature thimble is one of the tokens in the game of Monopoly.

Before the 18th century the small dimples on the outside of a thimble were made by hand punching, but in the middle of that century, a machine was invented to do the job. Another consequence of the mechanisation of thimble production is that the shape and the thickness of the metal changed. Early thimbles tend to be quite thick and to have a pronounced dome on the top. The metal on later ones is thinner and the top is flatter.

In the 19th century many thimbles were made from silver. Because this is a soft metal, it is easily pierced by a steel needle. Charles Horner solved the problem by using a steel core covered inside and out by silver. The result was still as pretty as a traditional silver thimble but more practical and durable. He called his thimble the Dorcas and these are now popular with collectors.

During the First World War silver thimbles were collected from “those who had nothing to give” by the British government and melted down to buy hospital equipment. In the 1930s and 40s red-topped thimbles were used for advertising. Leaving a sandalwood thimble in a fabric stores helps to keep moths away.

People who collect thimbles are known as digitabulists.

Christiane Potts is the founder and CEO of HobCommunity.com, a social network community for hobbyists to showcase all their hobbies under one roof as well as co-founder of Beacon Systems, Inc., an Internet technology company. Christiane was a literature major in college and enjoys using her writing gifts to share her expertise with others.