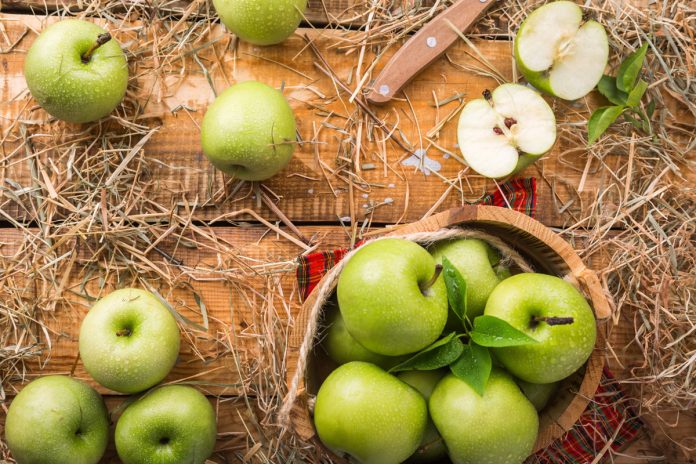 You know it, you love it — the Granny Smith apple. The gleaming chartreuse skin. That brilliant crunch. The perfect balance of juicy-sweet and tongue-curling tart that makes it the ideal eating and cooking apple.

But did you know there really was a Granny Smith?

Born Maria Ann Sherwood to a farming family in the lush agricultural area of Sussex, England in 1799, she married Thomas Smith, a farm laborer, when she was 19. They settled in the parish of Beckley, worked the land, and started a family.

In 1838, the Smiths were tapped by government agents looking for farmers willing to relocate to New South Wales, Australia. The British colony had been founded 50 years earlier as a penal settlement, a place to send convicts. But as more and more free settlers arrived in New South Wales, agricultural workers were desperately needed to feed the developing colony. Prospective emigrants were offered attractive financial incentives to make the move.

The Smiths took advantage of the opportunity, packed up their five children, ages 1 through 16, and boarded the Lady Nugent. The voyage from England to Australia was long and difficult, 13,000 miles on the crowded ship. The Smiths landed in Sydney in November, 1838. By 1856, they owned nearly 24 acres of rich farmland in the district of Ryde, outside of Sydney.

The Smiths were “orchardists,” farmers who specialize in tree fruit. Maria was particularly passionate about apples. On their land, the Smiths grew apples and pears, as well as vegetables, which they sold at the Sydney markets. Maria was also a skilled baker, well-known for her fruit pies.

It’s said that one day a salesman at the markets gave Maria a box of crabapples from Tasmania for her pie-making. She toted the fruit home, baked her desserts, and tossed the peels and cores onto the garden compost heap along with the rest of the orchard rubbish.

Soon, Maria found an apple seedling growing in the compost. She lovingly nurtured the tiny tree until it eventually bore fruit — the deliciously tart, green beauties we know today. There in her compost, Maria had unknowingly crossed the crabapple with the domestic orchard apple, it’s believed.

The earliest documented account of Maria Smith’s apple appeared in the June 25, 1924 edition of Farmer and Settler, in an interview with Ryde-area fruit-grower Edwin Small. Small remembered that in 1868, Maria had invited him and his father to look at an apple seedling growing by a creek on her farm. According to Small, Maria explained the seedling had developed from the remains of some French crab apples grown in Tasmania.

By the time of her accidental apple discovery, the much-loved Maria Smith was affectionately known by her community as “Granny.” Sadly, she died two years later, in 1870, well before the commercial success of her namesake apple. She was buried at St. Anne’s Cemetery in Ryde, where her headstone still stands.

In 1890, Granny’s fabulous fruit first appeared as the “Smith Seedling” at the Castle Hill Agricultural and Horticultural Show. The next year, “Granny Smith’s Seedlings” took top honors there for best cooking apples, and farmers in the area began growing their own.

In 1895, Albert H. Benson, Fruit Expert for the New South Wales Department of Agriculture, deemed “Granny Smith’s Seedling” appropriate for export. Indeed, Granny’s apple is noted for staying firm and crisp longer than other varieties. While Benson began the first large-scale cultivation of the Granny Smith, Granny’s son-in-law, James Spurway, and later his son Fred, are credited with early propagation of the apple and its expansion in Australia and export to the United States.

Today, Granny Smith apples are enjoyed all over the world — eaten out of hand and transformed into delectable pies, sauce, and juice. In Australia, a festival in Granny’s honor draws thousands of people annually. Edna Spurway, great granddaughter of Granny Smith, attended the 2008 event in Ryde.

So the next time you take a bite out of one of those glorious green Grannies, say a little “thank you” to Maria Ann Smith of New South Wales — the real Granny Smith, apple-lover to her very core.

Susan VanHecke is the author of the children’s book An Apple Pie For Dinner (Marshall Cavendish, 2009), in which kind old Granny Smith gets pie with a little help from her friends. Fun apple pie activities, music, discussion guide, and more at AnApplePieForDinner.com.