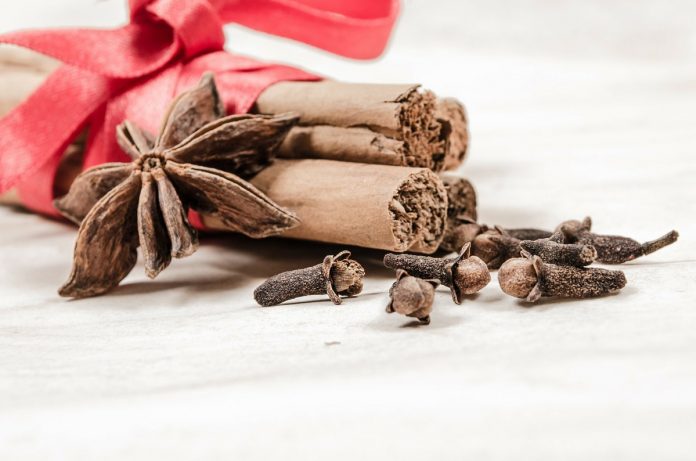 It’s hard to imagine a festive winter holiday without the aroma of baking wafting through our homes. Certain spices — such as allspice, cinnamon, cloves, nutmeg and vanilla — claim the holidays as their own.

“Baking is an integral part of the holidays, and there are certain spices that are integral to the holiday baker,” says Kendall McFarland, product development manager at Frontier Natural Products Co-op. “Many of the most popular recipes use the same types of spices, and these spices most certainly take the cake, so to speak.”

Many people believe allspice is a mixture of cinnamon, cloves, and nutmeg, hence the name, but it is actually the dried fruit of a small evergreen plant. It is especially delicious in cakes, cookies and pies.

One of the oldest and most widely used spices, cinnamon has a variety of uses and is a staple in most household spice racks. It is made from the bark of a cinnamon tree, which rolls up into what is commonly known as a cinnamon stick during the drying process. Easily recognized by its aroma, cinnamon adds warm sweetness to fruit pies — it pairs especially well with apples.

One of the earliest spices to be traded, cloves are native to Indonesia and are actually dried flower buds. Ground cloves are used in baking and are most often found in gingerbread, spice and fruit cakes, raisin or nut bars. Cloves add a kick to pumpkin pie, a traditional holiday favorite.

Historically a prized spice, nutmegs are the dried seeds of the nutmeg tree. Nutmeg’s sweet taste is excellent in puddings and custards, and it’s delicious mixed in with French toast batter. Try freshly grating a whole nutmeg for even more flavor.

Introduced to Europe by the Spanish conquistador, Hernando Cortes, vanilla has a rich history and a richer flavor. It comes in three forms: whole pod, powder, and extract. It is one of the most widely used ingredients in baked desserts and icings.

These spices can be used independently, or as a complement to each other to produce rich and interesting flavors. The key is to buy high-quality spices that contain robust flavors and aromas. “Frontier Natural Products Co-op offers a complete selection of natural and organic spices and seasonings in bottles, or take just the amount you need from their bulk bins. The superior flavor of their spices is a direct result of their commitment to quality at every step — growing, processing and packaging,” McFarland states.

Try this cake and fill your home with spicy holiday aromas:

Preheat oven to 350 F. Beat butter, honey and eggs together. Add buttermilk, mix well. Sift dry ingredients together, and add to the butter mixture. Mix well. Stir in the raisins. Pour into 8-inch square cake pan. Bake for 30 minutes or until done. Frost with this delicious cream cheese recipe.

Make cream cheese frosting by combining ingredients in a mixing bowl. Beat with an electric mixer until smooth. Add powdered sugar and continue beating until smooth. Spread frosting over top and sides of cake.

A Holiday Mule to Warm Up Your Guests

How to Make the Perfect Turkey