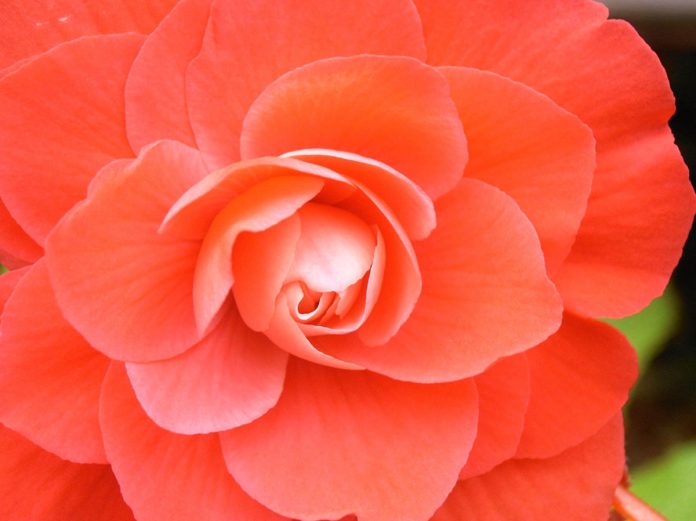 If you appreciate plants that have no hesitation in boldly stating their presence with huge, almost artificially perfect flowers, then tuberous begonias are for you. While some may find them rather too overstated, downright brazen even, if you like color, and plenty of it, with subtlety an option rather than compulsory, then look no further.

Flowering from late spring, as the days exceed 13 hours long, until well into autumn when the foliage dies back, these tuberous-rooted perennials have been extensively hybridized and refined to the point where the larger-flowered forms are nothing short of spectacular. For those with greenhouses or a very mild winter climate, there are even types that flower well into winter, if not right through the cooler months.
Description and classification and groups

Begonias are among those convenient plants where the proper name is also the common name. The genus is found in the tropics and subtropics, particularly in the Americas, and is made up of around 900 species with 130-odd in cultivation, from which many cultivars and hybrids have been developed. These garden forms have been divided into 8 main categories. They are:

1. Cane-like, which have narrow, upright stems with conspicuous leaf nodes and evergreen foliage.

2. Shrub-like, which are bushy plants with branching stems.

3. Thick-stemmed, which resemble the cane-like but with much heavier stems that sometimes form a trunk.

4. Semperflorens, which are the fibrous rooted types usually treated as summer-flowering bedding annuals.

5. Rhizomatous, which may be evergreen or deciduous and which are often grown as much for their foliage as for their flowers.

6. Rex-cultorum, which are the fancy-leaved Rex begonias that are usually grown as house plants.

7. Tuberous, which have thickened tuberous roots and which usually die back over winter or, in the case of the winter-flowering types, which may be dried off at some other time.

8. Trailing Scandent, which are pendulous, ever-blooming plants often with long internodes and which should not be confused with the trailing tuberous begonias.

So group seven it is, yet although quite a few begonia species have tuberous roots, when we talk of tuberous begonias we’re generally referring to the fancy-flowered group of garden-raised plants known as Begonia × tuberhybrida. Developed mainly from South American species, they first appeared in Europe in 1867, just three years after the introduction of the most influential of the early parent species, Begonia pearcei. Since that time thousands of hybrids have been raised and we now have tuberous begonias in a wide range of sizes and styles of flower and growth habit.

There are small- medium- and large-flowered hybrids; they may have single, semi-double or fully rose- or camellia-like double flowers; they may be small and mound-forming, trailing or upright to nearly a metre tall. And while the flowers are spectacular, don’t ignore the foliage. Because although unlike say the Rex begonias, tuberous begonias are never grown for their foliage alone, their velvety, deep green leaves add a rich luxuriance that is the perfect foil to the flowers, which would definitely be diminished without the contrast of the leaves.

So, tuberous begonias are beautiful. I don’t need to tell you that, the pictures speak for themselves, but how do you get the best out of them? Well, as garden plants they’re not for everyone and not for every location, though with careful selection and siting you may be surprised at just how well they grow outdoors in many parts of New Zealand.

Begonias have a preference for cool, moist conditions and a climate that doesn’t suffer from extremes of summer heat or winter cold. They need bright light to flower well but should be out of direct sunlight, especially during the heat of the day, and they also need shelter from strong winds or the flowers may brown at the edges and the soft foliage may be torn or bent. Tuberous begonias flower best with humus-rich soil, plenty of moisture and regular feeding.

Given those requirements, it’s not surprising that many gardeners choose to cultivate tuberous begonias indoors, as conservatory, shadehouse or cool greenhouse plants. However, if you have a bright southerly facing position in your garden or a shaded spot facing north, then begonias will thrive outdoors too, particularly in areas that don’t often experience drought in summer.

Strong sun and wind, especially hot dry winds, are the main enemies; light soil that dries out quickly doesn’t help either. But in a lightly shaded, sheltered position with soil that has been thoroughly prepared with plenty of well-rotted compost, tuberous begonias will flower from early summer to the first frosts. And all that you need do is to stake the tall growers to bamboo canes (specialist nurseries stock wire frames), remove any spent flowers, keep the soil moist and add a little liquid fertilizer every week.

If you find that the super-fancy large-flowered forms are simply not tough enough for your garden, don’t give up. Instead, try some of the smaller-flowered hybrids. The little Multiflora types, commonly known as Flamboyant Begonias, are very resilient. Grown as massed bedding or in clusters, they’re most commonly seen with bright red flowers, which often almost hide the foliage, but also occur in orange and a somewhat weaker yellow-flowered form.

Nonstop begonias are crosses between the Multifloras and the larger flowered types. As you’d expect they’re of intermediate height and vigor. They flower continuously, even in winter if kept indoors, and are available in a wide range of colors. Nonstops are F1 hybrids so there is no point in saving the seed and any seedpods should be removed to keep the plants flowering. Reiger begonias, developed from Begonia × hiemalis, are similar.

And if open beds don’t seem to work, consider growing your begonias in pots so that you can find just the right place for them. The upright types flower and grow well but are rather brittle, necessitating staking. The trailing types, often Begonia boliviensis hybrids, have more flexible, pendulous stems and when grown in hanging baskets they are easy-care plants that make a great show. Trailing begonias usually do best in sphagnum-lined wire baskets rather than solid pots, their roots appreciating the cool moist sphagnum.

Begonias have separate male and female flowers. Usually, one large female flower is subtended by two smaller male flowers. Removing the male flowers before they mature will allow the showy female flowers to reach their full size and will also prevent the development of seedpods that could lessen the plant’s vigor. Old flowers should be removed once past their best. They snap off easily and doing this not only encourages new blooms to form, it also helps prevent fungal diseases that could develop among the decaying petals.

Begonias are neither particularly susceptible to nor resistant to pests. Slugs and snail relish the young shoots and the mature foliage, various caterpillars may chew the foliage, rasping and sap-sucking creatures such as thrips, aphids, and mealy bugs may be present, but with a little attention and routine care, pests can usually be stopped before they get out of control.

More of a problem are fungal diseases, especially soft rots, mildew, and botrytis. Damaged stems can quickly become soft, watery and rotten and this may lead to the eventual collapse of the plant. Almost inevitably the foliage will develop mildew in late autumn – it’s just part of the winter die-back process – but mildew can also occur during the growing season. Good ventilation goes a long way towards controlling the severity of fungal diseases, keeping the foliage and stems reasonably dry also helps, though spraying with a fungicide will probably be necessary too.

As flower production lessens from mid-autumn, cut back on watering and feeding and allow your begonias to dry off. While the foliage should dry, brown and fall away without too many problems, do keep an eye open for any fungal diseases that could spread to the tubers.

Once the foliage has dried, the tubers may be lifted or removed from their pots for winter storage. This isn’t always necessary in mild winter areas, but where hard frosts or prolonged wet conditions are likely it’s a good idea. The tubers can be stored in barely moist sawdust or any other fairly dry, inert medium, such as damp, shredded newspaper. Replant them (concave side up) in spring as the new shoots appear. Cover the tubers with a few centimetres of soil, as they sprout roots from the tops too.

The exceptions to the process are the winter-flowering Begonia × hiemalis hybrids, which result from crossing Begonia × tuberhybrida with Begonia socotrana, a species from an Indian Ocean island off the coast of Yemen. Widely sold as Reiger or “blush” begonias, these plants start to flower from late summer and will remain in leaf and flower until spring. Obviously, these plants, which are completely intolerant of frost, need a very mild, benign winter to grow outdoors. However, they are very adaptable to indoor cultivation and are a great choice for winter-flowering house plants that can spend the summer outdoors in the garden.

There are several ways to propagate tuberous begonias, the method used varying with they type of plant.

Sow bought seed to produce F1 hybrids such as the Nonstops or to get a new crop of vigorous young plants.

Begonia seed is very fine, dust-like in fact. It’s so fine that it doesn’t usually come in seed packets, where it would be lost in the folds, but in glass vials that have to be snapped open before sowing. Pelleted seeds are much easier to handle, though they are not always readily available.

The seed needs warmth and light to germinate. It should be sown in spring, uncovered, in heated trays. Keep the seed just moist until it germinates. The young seedlings grow quickly and are soon large enough to pot. When small they are sensitive to draughts and temperature fluctuations and should be kept under cover until spring is well settled into early summer.

Prepare your garden beds with high-humus compost and organic fertilizer and because the foliage will be tender, plant out when the weather is not too hot and sunny.

Mature plants have large tubers that divide readily and division is a good way to quickly produce established sturdy plants. Divide the tubers in spring when replanting. They slice easily with a sharp knife but because finding the growing ‘eyes’ can be difficult keep your divisions on the large side. To prevent fungal diseases, dust the cut surfaces with sulfur powder and allow them to dry before planting.

Most tuberous begonias will grow from cuttings and this is an especially good method of building up large stocks of the small-flowered Multiflora types for massed bedding. The fresh spring and early summer shoots make the best cuttings and will strike very quickly under mild humid conditions. You can continue to take cuttings well into summer but unless the new plants can develop reasonably sized tubers before winter they will probably not survive until the following spring.

Like many of the house plant begonias, Begonia × hiemalis is often raised from leaf cuttings. This involves removing a mature leaf, slicing across its veins and pinning the leaf down on moist soil. A warm humid environment, such as an enclosed propagation tray, is essential. Also, you should start in spring so that the young plants are well-established before winter.

Public gardens often use tuberous begonias in their displays and this can one of the best ways to see a wide range of flower types.

I am a garden book author and horticultural photographer based in Christchurch, New Zealand. I run a stock photo library called Country, Farm and Garden http://www.cfgphoto.com.