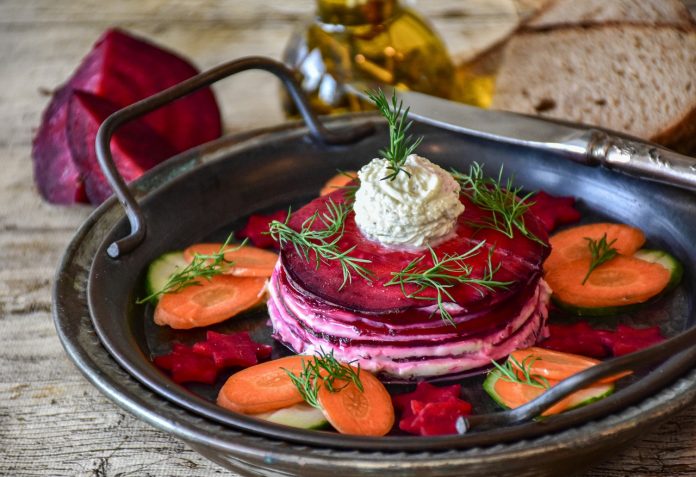 Did you know that the first vegetarian recipe book was published in 1690? Or that the 19th Century saw not only a growth in the vegetarian movement, but also the publication of increasing numbers of vegetarian cookery books?

The recipe for Turnip Tops and Nettles on Toast appeared in a book called “Vegetarian Cookery by a Lady”, published by Fred Pitman of London in 1866. Fans of the current fashion for ‘wild’ food may wish to give this recipe a try, but the less adventurous could still find plenty of things to tempt them in the book, like Onion and Sage Fritters or Baked Vegetable Marrow.

These were tough times for vegetarians though, facing scorn, and a general population with a dislike of vegetables! There was also very little choice of ingredients available and some of the recipes contain cooking methods impossible to imagine today. Many recipes though, seem surprisingly modern and can offer a simple, relaxed approach to appreciating the flavour of vegetarian food.

In 1690, Thomas Tryon wrote “Wisdoms Dictates, including Bill of Fare of 75 Dishes”, a tract which called for a vegetarian diet as the only sensible way to live healthily. His approach is all about avoiding foods difficult to digest and several of his 75 recipes don’t much stretch the imagination; Number one in the list for instance is a recipe for Bread and Water! He can also be somewhat puritanical even when suggesting tasty sounding recipes, such as in Currans (sic) and Oatmeal: “You may add Butter as most good Housewives do; but I must tell them that it makes it heavy on the stomach, and apt to send fumes into the head”.

However, a good look through his Bill of Fare reveals an intriguing list of vegetables and herbs, that are well worth seeking out: smallage, sweet charwell, balm and colworts for example. As for his recipes, you may wish to try “One Egg broke into a Pint of good Ale and brewed well”, but I’d have reservations about serving Spinnage (sic), Endive and young Parsley, which “cleanseth the Passages and loosens the Belly”!

Even though the recipes can seem overly simplistic to modern readers, such as the recipe for toast in “Vegetarian Cookery by a Lady”, which is one of the longest in her book. They do also offer more creative combinations such as her Onion Pie, which is filled with a tasty mix of onions, apples and sage.

Many of the recipes seem carbohydrate-rich to those of us more used to a Mediterranean style of vegetarian cookery, but there are pleasant surprises such as the Italian influence in Mary Pope’s recipes of 1893 for Polenta Cutlets and Rice Polpetti.

As with today’s recipe books, many are laid out in chapters, and these in themselves can be illuminating – it would be pretty impossible now to imagine a whole chapter of 29 recipes devoted to “Porridge, Gruel, etc”! Mind you, the recipes themselves are often laced with sugar, dried fruit, molasses, nutmeg and lemon juice, so they offer more tempting ideas than it might first appear.

The more limited range of available ingredients did encourage lively invention. How about Beetroot Fricassee and Curried Beetroot and Cucumber for example and Mrs Bowdich writing in “New Vegetarian Dishes” in 1892, suggests Fried Beetroot as a breakfast dish! The anonymous Lady also has a few surprises for the modern palette, with dishes like Stewed Watercress, Mushroom Tea, Fried Cucumbers and Crisped Parsley.

In their choice of ingredients, the writers display a spirit of using whatever is available in the land around them and not letting anything go to waste. Hence those turnip tops and nettles, which turn up as ingredients in several books, and also making an appearance are hop tops and sorrel, a hedgerow herb often ignored by modern retailers.

Our notions of sweet and savoury can be surprisingly overturned. Savoury Semolina never turned up on the school dinner menu, and Moulded Lentils from the anonymous “Penny Vegetarian Cookery” of 1885, is actually a sweet dish! Lentil flour is cooked with water, lemon flavouring and sugar, poured into a mould and when cold served with stewed or preserved fruit.

We might see it as a modern trend to create vegetarian versions of meat products like bacon and turkey-style Christmas roasts, but in fact, this seemed to be something of a trend by the end of the 19th Century. Florence George, a cookery teacher in Birmingham, UK published “Vegetarian Cookery” in 1908, and included recipes for a stuffed Roast Chicken made from butter beans and Roast Goose made from lentils. A woman surely well ahead of her time!

Mrs Bowdich also got in on the act and her book contains seven different recipes for sausages, with ingredients ranging from lentils to cabbage; Sausages in Batter and Sausages with Curry Flavour for example. There’s also Savoury Rissoles and burger-style Lentil Cakes, made from lentils, mixed vegetables, flour, baking powder and butter, then rolled and stamped out with a pastry cutter before frying.

While heavy use is made in the majority of the recipes of eggs, cheese and milk, vegans aren’t entirely left out. The case for excluding all animal products seems to be recognised only in terms of easy digestion, but certainly by 1908, Florence George lists such an exclusion as one of the forms of vegetarianism. Many of the recipes are made simply with vegetables, such as Spinach with Peas and Tomatoes, or vegetables served with bread in the form of toast or crumbs, such as Herb Soup thickened with breadcrumbs. Special efforts are made, such as an Omelet without Eggs or Butter, a mould made with macaroni, and by the turn of the 20th century vegan butter substitutes appear in the recipes, as do various brands of ‘nut meat’.

The inspiration for these early writers appears as varied as the reasons for turning vegetarian today. As well as those seeking a healthier, kinder diet, other titles hint at a prophetic realization that vegetarianism offered better, cheaper nutrition for greater numbers of the population; books like Eleanor E. Orlebar’s “Food for the People” and Job Caudwell’s “Vegetarian Cookery for the Million” for example.

But whatever their individual reasons, it would be hard to imagine today’s explosion in vegetarian ingredients, ready meals and restaurant options without these inspirational writers. And with our increased awareness of issues such as “food miles” and a need for more locally produced, freshly prepared food, maybe now is a good time to reconsider such “traditional” cooking and ensure we keep it as part of our repertoire.

Wash the rice and put it to boil with all the other ingredients except the butter. When the rice begins to swell add the butter and cook until all the water is absorbed and the rice quite soft. Turn out into a shallow pie dish to get cold and stiff. Cut into slices not more than half an inch thick, and cut the slices into triangles. Egg and crumb these and fry in hot fat. Serve with a thick brown sauce and grated cheese in a separate dish.

Cut one large onion very fine and one tart apple; fry them in oil or butter quite brown; dredge in flour until it forms a thick paste and allow the flour to brown; thin it down with water; add salt and pepper to taste and a tablespoonful of lemon juice.

Mix the vegetables, bread crumbs and flavoring together, moisten with half the egg, form into sausages, roll in other half egg and bread crumbs, and fry in the one ounce of butter or boiling oil.

Take Raisins, Currans (sic) and a few Pruans (sic), boil them in good water, when near done, thicken it with White Bread, adding Spice, Sugar, Butter and Salt; This is a rich Pottage, affording a great nourishment, and therefore it must be eaten more sparingly.

More of these recipes can be found in ‘Early Vegetarian Recipes’ by Anne O’Connell http://www.offmotorway.co.uk

Anne is a food and travel writer whose book ‘Early Vegetarian Recipes’ came out in 2008. She also runs Hollyfoods, a small food company selling locally at fairs around London.