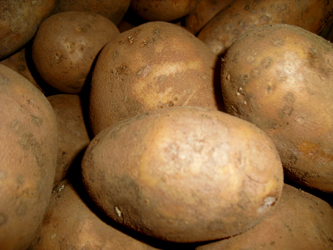 As defined in Wikipedia, the potato is a starchy, tuberous crop from the perennial Solanum tuberosum of the Solanaceae family (also known as the nightshades). The word potato may refer to the plant itself as well. In the region of the Andes, there are some other closely related cultivated potato species. Potatoes are the world’s fourth largest food crop, following rice, wheat and maize.

They say that the potato is the most popular tuber vegetable in the world. It may vary in different colours, shapes, starch content and sizes. Since potatoes contain 20% indigestible starch, it makes it important to cook it in a process before eating it. Of course, the well-known commercial products made out of potatoes are French fries, potato chips, mash potatoes, hash browns and baked potatoes.

The potatoes are commonly served with meat and chicken as a side dish. It can also be considered as a main ingredient to casserole dishes, soup and stews. Some varieties of potatoes are used in specific purposes such as baking, frying or just simply boiling.

Yellow Potatoes – commonly called as the “all-purpose potatoes” since you can do basically anything with this type of potatoes. They are normally slightly round or oval-shaped. It is covered with a very thin brown skin and the flesh is colour yellow. The yellow potatoes are suitable for baking, mashing, steaming, roasting, frying and boiling.

Russet Potatoes – the Russet potatoes have a net-type skin and its flesh is whitish. These types of potatoes are very high in starch content that makes it a very good ingredient for baking. They can be used in baking, boiling, mashing, roasting and frying.

This potato can either be long/oval or round/small. Due to its medium starch level, they create a very firm and creamy texture when cooked. They are considered also good for mashing, frying or boiling instead of baking.

They can easily be distinguished by their red or reddish-brown color. Their flesh is usually white but there are some which have a yellow or red color. The red potatoes are frequently used in salads.

Its shape is elongated resembling to fingers that is why it was called “finger potatoes.” Their skin is very thin and can be cooked without peeling it. You may use the finger potatoes as a side dish for meat.

This oval-shaped potatoes has obviously have a purplish to black outer skin. It has a very vibrant purple flesh making it stand out when combined to any meat dish.

Potatoes are the most flexible kind of vegetable. It can be combined with just any dish. And since this is one type of vegetable a kitchen should never be out of, the varieties mentioned above can be whipped up into something sumptuous and mouth-watering.

Gary House is the founder of Central California Dutch Oven Adventures and the host of Cooking-Outdoors.com who loves cooking outdoors with his Dutch oven for many years now. He has fun looking for innovative ways of outdoor cooking in what he calls “his adventures” and would love to share these adventures with everyone. For more information on product reviews, outdoor cooking recipes and techniques, please visit our website at: http://www.cooking-outdoors.com