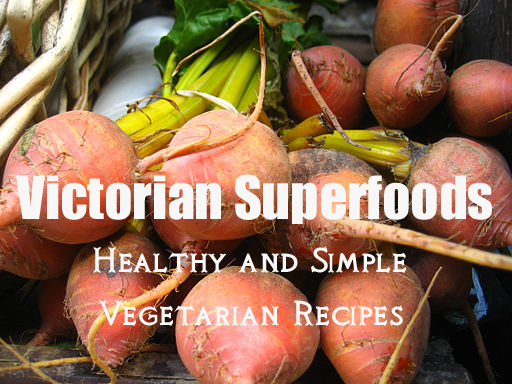 They may not have known what a superfood was, but the Victorians were as concerned with healthy eating as we are now. Taken from the book ‘Early Vegetarian Recipes’, these dishes offer tasty ideas for using ingredients with extra nutritional oomph!

Beetroot can be a much abused vegetable, but really is deserving of the superfood tag. Full of folate, betacarotene and potassium as well as some iron and vitamin C, it has historically been regarded as increasing resistance to disease and good for convalescents. Onions are also an excellent food, used in traditional medicine to treat colds and asthma amongst other things. You could try this salad with the beetroot grated raw with the celery for extra crunch, which really brings out the earthy sweet flavor.

Recipe: Boil a beetroot and when it is cold peel and slice it. Peel a large Spanish onion and cut it carefully in thick slices in a wire vegetable basket. Place alternate layers of beet, shredded celery and onion in a dish and pour over a salad sauce or mayonnaise.

We all know that eating our greens is good for us, not only did our mothers say so, but the evidence just keeps getting stronger. You really do need dark green leafy vegetables for good health and should eat a portion every day.

This unusual recipe is a wonderfully surprising mix of flavors and makes for a great brunch or light supper. You could use any greens that are in season, and watercress makes an especially good addition. The cinnamon could be swapped for nutmeg for a slightly citrus tang.

Drain and slice the vegetables, and put with the butter, the cinnamon, sugar, salt and pepper into a pan with a drop of water to wilt. Beat and stir in the eggs. Cover with a lid. To brown on top, place the pan under a hot grill (broiler). Shake the pan occasionally, and when brown on both sides turn carefully out.

Millet is gluten free and easy to digest. It’s also high in protein and a range of other nutrients including B vitamins, magnesium and zinc. No wonder it is loved by healthy eaters everywhere! This recipe also works well as a vegan dish – use soya or rice milk and as suggested at the end, leave out the egg and stir in some fruit

How made: – Pick and wash the millet – throwing away any seeds which rise to the top of water, as they are not good, and soak over night. Drain and heat with the milk in a pan. When boiling add the sugar; boil again for twenty minutes, then set aside to cool, when the beaten egg should be stirred in. Set over the fire again and boil till ready, stirring occasionally to prevent burning to the saucepan. If desired, it may be turned into a buttered dish and baked the last half hour.

Note. – To millet boiled in water may be added, when about half done, rhubarb cut in short lengths, stoned raisins, or any other fruit, with sugar to taste omit egg in this case.

Anne is a food and travel writer, author of Early Vegetarian Recipes and the website offmotorway.co.uk. She also runs Hollyfoods, a small food company selling locally at fairs around London.