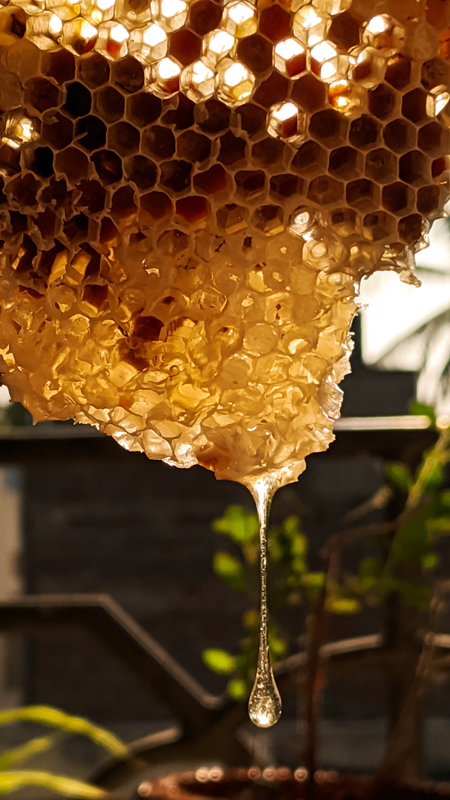 Honey is the luscious sweet and gooey syrup that is produced by the honey bee. The range of honey that exists is almost infinite given that no two batches of flowers are ever the same. Out of twenty thousand or so species bee only 4 are honey bees with 44 sub species. They are a member of the hymenoptera family which also includes wasps sawflies and ants.

The honey bee is an industrious little insect – for a bee to produce just one teaspoon of honey it will fly over 55,000 miles and there are thousands of worker bees all on a mission to collect nectar. So what do they do exactly?

The field bees will seek out flowers that are in abundance and with their long tube like mouths will suck up the nectar into their honey stomachs. This is a like a little storage pack for keeping the honey. Bees actually have two stomachs one for storing honey and a regular stomach. The nectar which they gather is approx 80% water and 20% complex sugars. Bees will collect nectar from 100-1500 flowers before their stomachs are full. Their stomachs hold approx 70mg of nectar which is nearly the same weight as the bee itself. Once full it will then return to the hive where other workers – the hive bees – will suck the honey out of their stomachs and then chew on it – repeatedly regurgitating and mixing it with enzymes which turns the complex sugars into simple sugars – this makes the honey both more digestible and resistant to bacteria infection. When layering the honey comb with honey the bee will use its wings to further evaporate any excess water. At this point they store the honey for winter in the comb or use it to rear their brood.

The comb itself is made of wax and this wax is produced via the bees ingestion of honey. About six to eight pounds of honey must be consumed the bee to create about a pound of wax. The wax is essential to the colonies survival as they use it to store honey and raise their brood. The honey bee has special wax producing glands that create wax. The bee lives for approx forty five days and its wax producing glands are most productive around the ten to seventeen day mark. After the the eighteenth day it’s wax glands start to decline. The wax glands are on the side of the bees abdomen and it is through the consumption of honey that the wax glands convert the sugar in the honey into wax. It is then extruded from pores on the abdomen. Thereafter it is masticated to soften it, then it becomes workable and constructed as part of the comb.

Interestingly enough the hexagonal structure of the comb was confirmed by mathematicians to be the most strongest and efficient shape possible. It essentially uses the least amount of wax to store the most amount of honey making it an architectural triumph. When you buy honeycomb you are not only getting the purest of honey you are also of course getting the wax, propolis pollen with a wealth of unique properties rarely found in other foods.