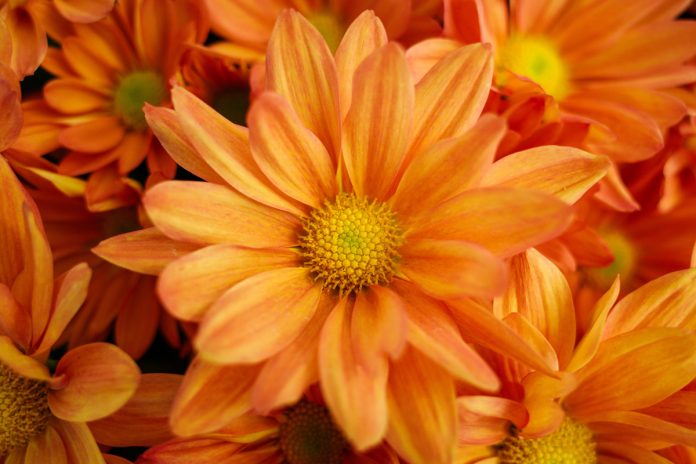 When autumn falls, everything feels cold, bleak, and dead. However, you can still change the dull atmosphere in your home by creating a fall garden which will add pulchritude to the autumn blur. There are plants which you can actually put in your fall garden. Wide range of colorful flowers will enlighten your garden and will induce life and color. The only thing you need to do is to have the perfect flowers to plant in your fall garden. Below are some top fall flower favorites of garden planters in an autumn garden.

When michaelmas daisies starts to bloom, this tells people that fall is on its way. The name suits the flower since it was named from the Mass of St. Michael or Michaelmas which falls on the 29th of September. This is a type of aster which is also called as the New York aster. Michaelmas daisies are combinations of blues and purples but this pretty autumn flower also comes with whites, mauves, pinks and lavenders. The typical blues and purples is superbly beautiful during low autumnal sun. If you want this lilac-blue flower to cover your ground, better cut this back hardly in early spring or autumn.

Fanatics of blue flowers will surely love this genus of plant, the Caryopteris which is commonly called as Blue Mist Shrub or Bluebeard. This woody perennial has aromatic foliage and has blue flowers. This can be a perfect garden flower since it does not need much of maintenance. Its feathery flowers cluster on top of the foliage. The bluebeard needs a full sun exposure to a partial shade.

The Chelone or the turtlehead is a perennial flower that has a white, purple or, pink flower. Its nickname was coined to its flower that seems to resemble a turtle head. The weather resistant flower blooms from the short terminal of spikes that grows dense in its rounded stem. This fall flower blooms perfectly autumn and hates to have an extreme and dry environment. This means that this sturdy two-lipped flower tolerates boggy areas. It is perfect for damp and moist soil. Also perfect for those who live waterside.

More commonly called as Hardy Garden Mums, Chrysanthemums are used as beds and borders in gardens and used as cut flowers. Hardy mums’ showy flowers comes in varieties of color such as lavender, orange, yellow, red or white. This is a favorite flower in fall garden because it blooms at its fullest during the autumn season. Mums grow well in a fertile soil with partial sun exposure but it grows best in full sun.

This perennial plant’s common name is Joe Pye Weed which is coined from a Native American herbalist. The multiple flowers of Eupatorium are usually mauve or old rose that is composed of five to eight florets and bracts that cluster in the plant. It has been well-liked by hummingbirds because of its tubular corolla of each floret. Joe Pye Weeds grows best in a moist soil with a full sun exposure. Make your garden a mini paradise with the butterflies and birds attracted to your Eupatoriom and your ornamental solar fountain.

The Sneezeweed or the Helenium is a perennial plant that grows best in August or September. It grows for four to five feet tall with two inch yellow daisy-like flower. Instead of making you sneeze, this beautiful fall flower will make you smile when you see bunch of autumn yellow flowers sway and beam in your fall garden.

The flashy flowers of this Helianthus makes your garden a paradise by inviting birds in your fall garden. Grows three to six feet tall with bobbing three-inch yellow or white flower, Helianthus grows well in a moderate moisture soil with a full exposure to sun.

Clumps of Heliopsis that grow in your fall garden would be bliss. It will be the most beautiful fraud in your garden since it resembles more of a sunflower, however, smaller. Because of its sunflower appearance, Heliopsios got its nickname as the False Sunflower. This perennial beauty blooms yellow flowers and grows well in autumn.

Another botanical name of Sedum is Autumn Joy. From its name, you can be sure it would be a joy to have this butterfly-attracting pink wonder. The Autumn Joy or commonly called as Stonecrop is a perennial flower that blooms best in fall. Its luscious stem and leaves can withstand rain and drought seasons. It grows broccoli-like like flowers that usually comes in pink but has also a copper variant that is perfect for the autumn feel.

The Golden Fleece ends the list but it is not the least. Their showy seed heads that splays densely upwards appears like a bouquet of yellow flowers that attracts butterflies. The Golden Fleece self seeds so if you want to prevent it to prevail in your garden, you should deadhead it. It can grow in partial shade or even in full sun in a moderately fertile soil.

Now if you want to have the fall garden you want, better have the flowers in the list. Even in autumn season, you can still create a colorful and wonderful garden if you know how to pick the perfect flowers. You don’t have to be conscious about the clashing of colors in your garden since fall flowers typically have the reds, whites, purple, orange and yellow. Make yourself delightful with your fall garden’s magnificent variants of fall flowers.

November in The Flower Garden

Autumn Frosts – Which Plants Are Vulnerable and How to Protect Them

The Garden in November