A Guide About Chrysanthemum Flower Types 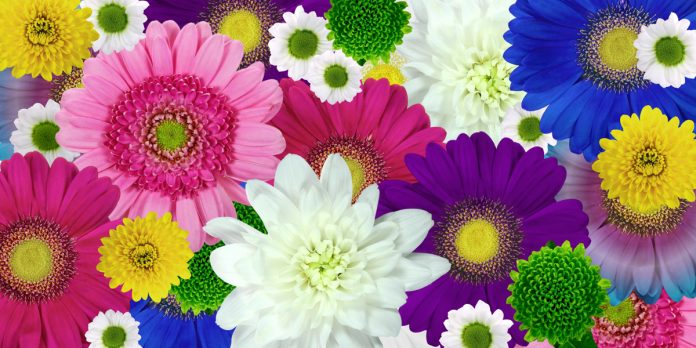 Native to Asia Minor. A beautiful little hardy herbaceous perennial with a sub-shrubby habit, up to high. Its almost prostrate branches are clothed with finely cut silver-white foliage with a characteristic scent. The small yellow, attractive, daisy-like flowers are freely produced throughout the summer. An excellent rock-garden plant.

Native to Iran and the Caucasus. Generally sold and better known as pyrethrum. Easily cultivated plants of the greatest beauty and among the finest of all flowers for cutting. Flowering period from May to June and frequently again in September. The large single or double flowers are, wide, borne on tall, rigid stems, and have a typical daisy-like appearance, with many petals. The original species with pink or red flowers is now rarely cultivated in gardens and it has given way to the many superb hybrids with lovely colours and an improved flower shape. Some of the best garden pyrethrums are:

Native to Korea. The original species is a robust, vigorous herbaceous perennial up to high with small pinkish-white flowers in late summer and autumn. The plants have a loose, open habit with slender branches often with a semi-pendent form. The many hybrids of this chrysanthemum have, during recent years, been instrumental in establishing the enormous popularity of the so-called Korean Chrysanthemums of gardens. They are superb plants producing an abundance of single or semi-double flowers up to, in diameter, but generally considerably smaller. They are excellent for pot culture and for beds and borders. They can be cultivated to have a dwarf shrubby appearance, as standards, with a pendulous cascade- like form up to long, and in the form of floral cushions. Their foliage is small, they are of the easiest cultivation, and they have a vast range of colours. European gardeners, in particular, make great use of pot-grown plants, with their prolonged flowering period, using them in beds, etc., to replace summer-flowering annuals that have finished blooming and before the beds are replanted with spring- flowering bulbs. Some of the best hybrid Korean Chrysanthemums are:

These are all of hybrid origin, largely from crosses derived from such species as C. indicum and C. sinense , and they constitute a vast and varied group popularly known as Florists’ Chrysanthemums, and by some authorities referred to as hybrids of Chrysanthemum morifolium. The National Chrysanthemum Society of London has divided them into the following six classes.

Incurved. Petals curved inward towards the centre, practically half- moon shaped and uniting to form a large ball-like bloom. Some of the best are:

Native to China. It is a half-hardy herbaceous perennial and one species that has helped produce the popular garden chrysanthemums, in particular the so-called Japanese Chrysanthemum, also called Florists’ Chrysanthemum, with incurved petals. The original species has small yellow flowers borne in clusters on erect stems in autumn. First introduced into Europe. There are now so many hybrids, divided into so many types, whose parentage is so involved and complicated, that it would be impossible to enumerate them all here.

Native to Europe. A hardy herbaceous perennial with white flowers. It is the common white field daisy with flowers ins, in diameter and requires little description. It is an attractive plant massed, although it can become a nuisance in gardens.

Native to China. A non-hardy herbaceous perennial, one of the smallest of chrysanthemums and one of the gems. Unfortunately, however, it seems to have disappeared from cultivation. It was widely cultivated about forty years ago in the Hanbury Botanic Garden at La Mortola in Italy. The finely divided graceful foliage is silver, while the small freely produced single flowers are an exquisite shade of dark pink. The combination of these two colours and the general elegant appearance of the plant are remarkable, especially when associated with the grey and mauve of lavender bushes. It is strange that no nursery cultivates such a lovely little plant for mild climates.

Native to Europe. A robust, vigorous plant with large, coarse, rather ugly, shiny green dentated leaves. The large white -single flowers, in diameter, have a golden centre and are freely produced on tall, rigid stalks from mid-summer until early autumn. It is one of the easiest plants to cultivate in almost any position. Of greater interest than the original species are the numerous garden varieties:

Native to Europe. A bushy little plant with soft, hairy, deeply cut, attractive leaves and small white flowers wide. The species is of little garden value, but the many hybrids are plants of considerable beauty and deserve to be included in the garden. Although perennial, it can also be treated as an annual and it will bloom the first year from seed sown in February—March. Excellent for the rock-garden, for edging, for window boxes, and for small beds. The hybrids are more frequently offered under the old name of Matricaria; while the species is also sometimes referred to as Matricaria capensis or Matricaria parthenioides. Some of the best are:

Native to China. Magnificent plants for late summer and early autumn of the easiest cultivation. The original species has produced many lovely hybrids with a wide range of colours. The individual blooms are , in diameter, single or semi-double, and produced in such profusion that they completely hide the plant. The stems are slender, graceful, and of a spreading habit so that one well- cultivated specimen can cover an area of one square yard. Some of the best hybrids are given below; all are excellent for cutting, for pot culture, and for beds and borders:

Native to China. Through a complex series of crosses, another of the species which has helped evolve the modern garden chrysanthemums, particularly the more hardy types. The original species has no special garden value. The flowers are small, single, up to, wide, and vary in colour from pale yellow to pink.

Native to Europe. A hardy herbaceous perennial of the easiest cultivation but prefers partial shade. An erect vigorous plant with a branching habit and light-green foliage. In late summer it bears aprofusion of large single white flowers in diameter with yellow-green centres. Excellent for cutting.

Native to the Canary Islands. A non-hardy shrubby evergreen species of the greatest value. In a mild climate the plant flowers almost perpetually, especially if the dead blooms are removed regularly. It is much exploited by commercial growers and is nearly always available in flower shops as a pot plant. Also of great value for cutting. The foliage is light green, very graceful, much-divided, and fern-like. One of the finest plants for growing in large pots or other containers in a hot, sunny position. Even in districts where winter cultivation outdoors is not possible, when placed outdoors in April the plants will begin to flower immediately and continue to bloom until the first frost. The individual blooms are typical little daisy-like single flowers up to ins, wide and of a particularly pleasing sulphur-yellow colour. The white-flowered form has slightly larger blooms.

Native to Morocco. Although a non-hardy evergreen shrub in its natural habitat, it is invariably cultivated as an annual in gardens under the name Chrysanthemum tricolor. It has long rigid stems and deeply cut decorative foliage. The flowers are freely produced during the summer; white with a purple and yellow centre, and about, in diameter. Introduced into European gardens. The plants have a good bushy form and the blooms are ideal for cutting. This species has been crossed with several others and the results are very attractive:

Native to the Mediterranean regions. A very easily cultivated species with much-branched stems bearing pale-green, deeply cut, much- divided, attractive foliage. Flowers freely produced on long stems from early summer onwards; If ins, in diameter; white, cream, or pale yellow. Numerous excellent garden hybrids have been introduced with either single or double flowers; there is also a dwarf form, var. nanum compactum. Among the garden forms of Chrysanthemum coronarium the following are of special interest:

Native to North Africa and Spain. A vigorous bush-like annual species; deeply cut foliage with a viscous surface caused by the presence of numerous sticky hairs. Yellow flowers of a rather coarse appearance but an excellent plant for cultivating in a semi-wild manner in a sunny position in poor soil.