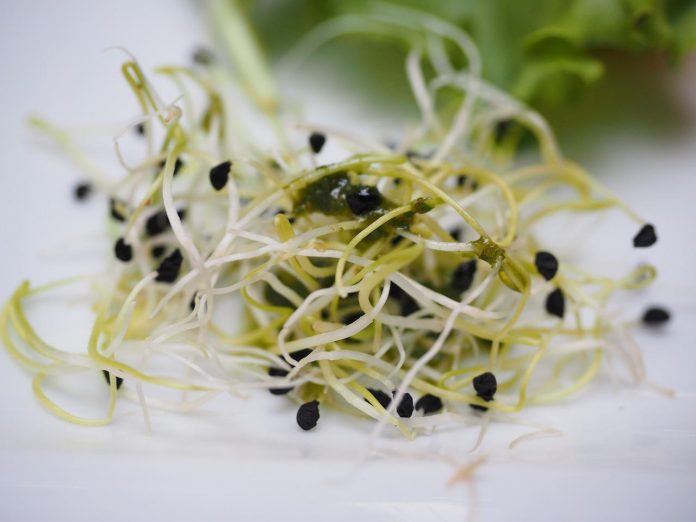 Alfalfa sprouts nutrition value is extremely high as being once recognized as the ‘father of all foods’. Alfalfa- medicago sativa belongs to the pea family and it can be grown in any location or climate.

• Known as the oldest plant used for livestock feed, with records of its use going back to 1000 BC, alfalfa originated in Iran and was first discovered by Arabs.

• Romans and Arabs used to feed their horses alfalfa, claiming that it made them strong and fast.

• It is still one of the most nutritious forage crops in the US with a very high yield potential and the greatest amount of protein per acre and also a wonderful honey crop for bees.

• The Chinese have used alfalfa since the sixth century to relieve swelling and fluid retention and to treat kidney stones.

• Alfalfa has a root system that can reach down more than 40 feet and it is drought resistant.

• Sprouts are used in salads, and the alfalfa leaves may be eaten raw or cooked as a vegetable.

• Alfalfa sprout is one of the best sources of anti-oxidants among all vegetables.

• Alfalfa slows down the aging process, helping you maintain your youthful looks longer, and stay energetic and healthy as you mature over time.

• It is ideal for weight loss and best not to include too many alfalfa sprouts if you are interested in gaining weight.

• It can help detoxify the body, especially the liver.

• Alfalfa is helpful in the treatment of diabetes as it is known to stabilize blood sugar levels as a low GI food.

• Isoflavones in alfalfa are believed to be responsible for estrogen-like effects and alfalfa is occasionally used to treat symptoms of menopause.

• Alfalfa works as a restorative tonic and helps to treat chronic and acute digestive weaknesses.

• Alfalfa contains essential enzymes which are required for food digestion.

• L-canavanine amino acid in alfalfa sprouts may be effective in fighting leukemia.

• Avoid eating alfalfa seeds, because they contain relatively high levels of the toxic amino acid canavanine and may cause damage to red blood cells.

• Too much alfalfa may lower the amount of potassium that you have in your blood.

• Homostachydrine and stachydrine in alfalfa promote menstruation and may lead to miscarriage. So it may be wise to not consume alfalfa during pregnancy or to first ask for advice from a practitioner.

• Alfalfa contains vitamin K, so it may be a good idea to avoid taking it if you have heart or blood disorders.

• Overall, it is not an essential nutrient as such; so, you cannot be deficient and please be careful not to overeat it.