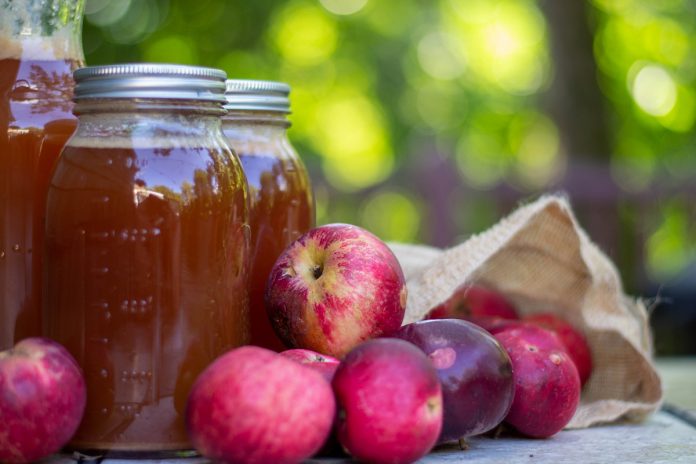 “An apple a day keeps the doctor away!” – is the most common phrase that rings in our ears whenever we to fall sick. But then, most people crib at the sight of this juicy fruit, although apple juice nutrition is a well-known fact. No worries! One can actually consume apple juice which is not only tasty but also a healthy drink. So, have you ever wondered how come the apple juice you drink is so clear, less tangy and more sweet? Well the answer lies in the processing of the apples! Now let me ask you – Have you tasted the product that is obtained directly by macerating the apples? Now, that is called apple cider!

What is the difference between apple juice and apple cider? Apple juice is a processed juice that is obtained by pressing and crushing the apples and filtering the juice off the pectin and starch content. The juice is filtrated and pasteurized to give a clearer and transparent look. Whereas, apple cider is the unprocessed form of apple juice which has high levels of potassium, iron and pectin. Usually, apple cider is a popular beverage on Halloween and thanksgiving.

So, How is Apple Cider Made? It is Simple!

1. Take some fresh picked apples. Cut them into pieces and mash them in a blender until an applesauce like consistency is obtained.
2. Cover the mash with a wet muslin cloth and place in wooden racks that are exposed to hydraulic press.
3. Add some cinnamon or nutmeg to the freshly prepared apple cider to spice up the drink.
4. Store the unsaturated juice obtained, in clean glass bottles and refrigerate.

Apple cider does not contain any sugar or flavor. But when storing it, potassium sorbate is added to inhibit fermentation of the cider. Refrigeration stalls the fermenting to an extent. But if you want to serve apple cider as a hard drink, then it is best to ferment it. This is because, after complete fermentation of the unpasteurized apple cider, all the sugars contained in it are converted to alcohol. However, unpasteurized cider if not prepared hygienically, can prove perilous to health, as it may contain bacteria such as E. Coli and salmonella. Hence, it is important that the hard cider is pasteurized before use. Pasteurization can be done by heating the freshly prepared cider up to 160 oF-185 oF. A lot of froth is formed when boiling. Remove the foam and refrigerate the apple cider in a glass freezer container. Usually, the apple cider which is less fermented is referred to as the sweet cider and the one which is completely fermented is referred to as the hard cider (a popular hard drink).

Now coming to apple juice, it is a commercial favorite unlike apple cider. Due to its clearer and attractive look, it is loved by children too. There are two kinds of apple juice; cloud and clear. The clear one is devoid of the starch and pectin content and hence, the cloudy apple drink is suggested to be healthier due to the higher content of antioxidants in it. However, both contain phytonutrients and flavonoids that are responsible for reducing the risk of respiratory diseases. It has also been proven that the phytonutrients of apple juice aids in oxidation of bad cholesterol thereby preventing cardiovascular afflictions. Apple juice benefits are many. Apart from its antioxidant properties, it is also an instant energy drink with no fat content. So, next time when you are eating a hamburger, have a glass of apple juice along with it. Apple juice for constipation is also considered to be a good remedy.

Apple juice is a commercial success. It is readily available at any store and is also loved by children. But apple cider is the healthier drink, as freshly prepared cider is the healthiest form of apple juice containing natural sugar and no added flavors. Only care that needs to be taken for apple cider  is hygiene during preparation of apple cider. Otherwise, both drinks are healthy and can be used to make yummy cocktails and mocktails. A tough take though, freshly prepared apple cider definitely surpasses the commercially prepared apple juice that is available in the market, in terms of health.