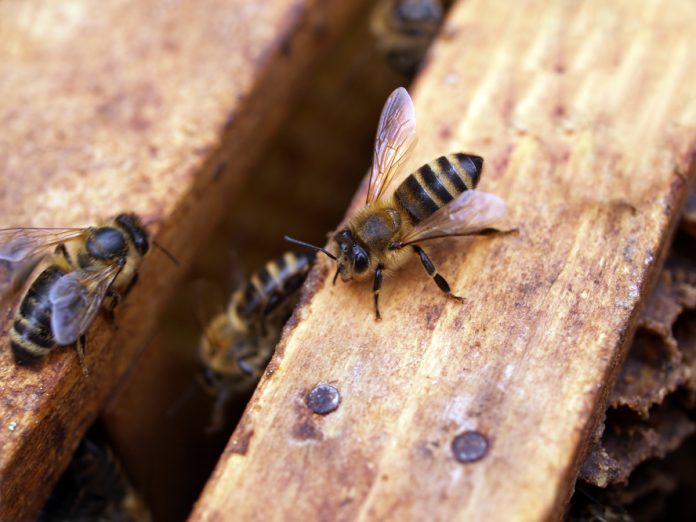 When we think of bees, we generally think of flowers, honey, dandelions, clover and numerous other images which connect us to nature. Our connection to earth through bees is not only a comforting bond, but a necessary one; one that has seen threats in recent times from man as well as the unexplained. But in a corner of the world, at the shores of Lake Erie, a bee phenomenon has parts of the community breaking out in, well, hives.

We’ve all heard the buzz about Colony Collapse Disorder or (CCD), the phenomenon of worker bees abruptly disappearing from a hive leaving the honey and the immature bees to perish. Throughout the history of agriculture, hive reductions have occurred but have not been significant enough to name until 2006 when a drastic decrease gave rise to the new term. The agricultural significance of bees should not be underestimated. Bees are integral to the ecosystem in the way they interact and connect with the parts therein. Over one-third of our food supply relies on the pollination services of bees and is essential for the reproduction of the plants the bees service.

10 Lessons We Can Learn From Honeybees

Imagine a world without blueberries, avocados, almonds, sunflowers, cranberries or, the summertime favorite, watermelon. Without the honey bee, many of our staple foods would be in jeopardy. Without the bee, we also would not have the direct byproduct: honey. Raw honey is anti-bacterial, anti-viral and anti-fungal. Our history, without the bee, would have a much different look. Civil War gunshot wounds were filled with honey as a way to heal and fight infection. In medieval times before the invention of gunpowder, bees were inserted into clay balls and used as projectiles during wartime.

In more recent times, the Cleveland Clinic has been reported as giving its post-op patients toast with honey, rather than jelly, as a post-operative recuperative agent. Hotels which have taken to growing their own herbs and flowers have added bee hives to their culinary repertoire for pastries, soups, salad dressings and more. The end byproduct of the honey bee, beeswax, has been used for candles for the Catholic Church for centuries. Being seen as a sacred product, beeswax was once a requirement for all candles used in the services. Ancient Egyptians used beeswax to make death masks, form statues of gods for the graves and to embalm their loved ones.

Backyard bee keepers are cropping up, or pollinating, across the country, accompanied by associations to assist the “new-bees” in their endeavors. These organizations act as a resource for amateur bee keepers stung with the desire to “bee” involved. They provide forums to share ideas and information to increase public awareness of the benefits of natural honey and hive products. The Galvin-Gillman family of Port Clinton, Ohio exemplifies the concept of the amateur bee keepers of America on the shores of Lake Erie. This family stumbled, or bumbled, onto the hobby-turned-business during the summer when a bee-saving opportunity landed their way.

As with many entrepreneurial first-time bee keepers, they’ve had their share of hits and misses in the hives, and grown accustomed to the “fly-bys” of the bees returning to the hive after a busy day of pollinating. The Galvin-Gillman’s have also geared up; it’s imperative to dress appropriately when dealing with hive occupants. For headgear, a hat with a wire veil to protect the head and neck is essential. Wearing light-colored overalls is recommended as dark clothes irritate the bees making them more likely to sting since they may look on the Galvin-Gillman’s as predators such as skunk or bear. Bees like to go for hands and feet so loose fitting gloves and sturdy boots are important. For extra protection, they tuck in their shirt cuffs and pant legs to prevent bees from entering.

They’ve also learned more than they ever thought about the bee civilization. There are three types of bees active in the hive: the queen of the hive is the center of the bee’s universe and acts as the mother of them all. Each hive has one queen with the sole job of laying eggs to ensure the population of the hive. Much like many American households, the hive requires a healthy, happy queen for continued existence.

In addition to the queen, there are worker bees and drones. The thousands of female worker bees which inhabit the hive have every responsibility except laying eggs and mating. Most species of worker bees lack the reproductive capability of the queen and instead deposit wax to build the comb, keep the hive clean and safe, feed the larva, drones and the queen, gather the necessary nutrients for the hive and keep the temperature uniform in the developing brood area. To cool the hive, they deposit water then fan it around with their wings and to heat the hive, they gather together to generate body heat.

The drones of the hive have limited functions, the main one being to mate with the queen. Drones have a different body style than worker bees, including larger eyes, bodies and stouter abdomens. Since the mating with the queen occurs in flight, the larger eyes are a benefit to the drones. Lesser benefits of being a drone are the fact that after copulation, the drone dies due to the necessary parts tearing from the body at intercourse and, in areas of severe weather, they are driven out of the hive in autumn. The other function of the drone is to assist the worker bee in the hive’s temperature control. Thus two very important functions for a bee whose life span is only 90 days.

The Galvin-Gillman’s were first introduced to bee keeping when a hive was discovered not far from them in the trunk of a felled tree. Transporting the hive was tricky, treacherous and unsuccessful but left them with the desire to continue learning the intricacies of the process. They started anew and have now grown to four successful hives with more planned for the upcoming summer season. It has also given them an appreciation for the parts and parcels of the bee keeping adventure. A big favorite of the family is bee pollen, described by Beth Gillman as “the complete food”. Bee pollen has an earthy, rich flavor and has been suggested to have “all the nutrients needed by the human body to sustain life”. Its benefits include a boost to the immune system, the ability to build allergen resistance, stress reduction and the increase of energy and endurance.

A sweet, chewy snack they enjoy is bee propolis, which is used like glue in hive production and has several suggested health benefits. It has been seen to have antibiotic and antiseptic properties and possible anti-viral and anti-inflammatory uses. Bee wary, however; people who react to bee stings may react to propolis in the same fashion.

Even though the bees are ending their summer run and beginning the rebirth for a new season, the Galvin-Gillman family are not being idle. Brian Gillman is acting the worker bee himself, planning, plotting and prospecting new hives in time to be ready for the summer. Chris and Beth are working feverishly on product design and marketing. Though the Port Clinton honey was a new venture, the available honey they merchandised sold out in a week. So for the time being, they’ll work hard and drone on in behind-the-scenes fashion till summer starts and they all find themselves busy as busy bees.