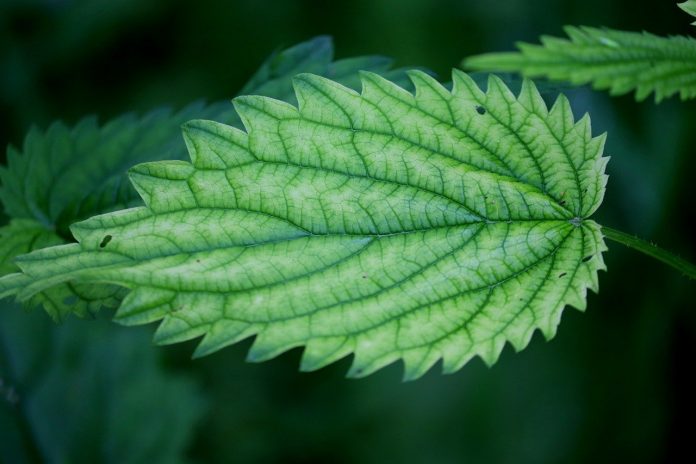 Stinging nettle loves abandoned properties and can be readily found where the people have moved on and let the plants have a free rein.

Stinging nettle may be found in Europe, Asia, N Africa and N America.

This is a wild crafters plant. A few sensible precautions can reduce your odds of getting stung. One wear long sleeves, long pants and gloves, the garden variety are fine. This actually makes sense no matter what plants you are collecting on abandoned lots, fields or in the forest.

The long sleeves and pant legs will protect you from a variety of plants and small wildlife, like ticks.

Two, use a good sharp pair of scissors to make a quick and clean cut and be sure to hold the plant by the leaf and in the middle, the video gives a good demonstration of how to harvest.

The nettle is vibrant green in colour and it is said that this indicates that the plant has a high iron and chlorophyll content. Stinging nettle is also reputed to be a very good source of the minerals calcium, magnesium, silicon, sulfur, copper, chromium, zinc, cobalt, potassium and phosphorus as well as containing high amounts of vitamins A, C, D, E, and K as well as riboflavin and thiamine.

The nettle fiber has been in clothing instead of cotton and flax, In Europe, the plant was gathered while young approximately a foot in height. It was then used as a vegetable not all that different from spinach, another under appreciated food source. In fact, if you find the taste of spinach to strong, you may prefer the milder taste of nettle.

Apparently, nettle was used to treat scurvy and as a spring tonic. It has also been used as animal fodder as when the plant is cut and left to dry, it loses its bite.

Historically, the Germans have used nettle this way, as fodder for horses and have fed nettles to chickens with an increase in egg production.

Another traditional use of this versatile plant was to keep flies out of the larder which was accomplished by hanging a bunch of fresh nettles there.

It is claimed that the entire plant, that is the stems, leaves, flowers and roots possess strong medicinal properties. Stinging nettle tea is simple to make and there are two basic ways to do so:

Two- bring water and nettles to a boil. Simmer for a couple of minutes. Remove from heat. Strain, enjoy.

A friend and I used to go nettle gathering in Northern Ontario a few years back. We did not have to travel far. Our first stop was her backyard where we had transplanted a few stinging nettle plants about two years previously; this was always the early harvest for the young leaves.

A week or two later we would hit a couple of spots around town with a few block radius of her place and collect all we needed.

If you are wild crafting nettle or any other plant from an unknown property you are taking a chance that the soil in which it was grown was contaminated in years previous and by now the toxins have been sucked up by the plant.

This was the main reason we moved some nettles from one site we knew was safe but far away to her backyard.

The urban environment does have much food to offer those who know what they are looking for but never forget that those same environments may be the home to a wide range of substances that you do not want in your body.

The knowledgeable wild crafter finds out before gathering.