History of Plum Trees and Their Hybrids 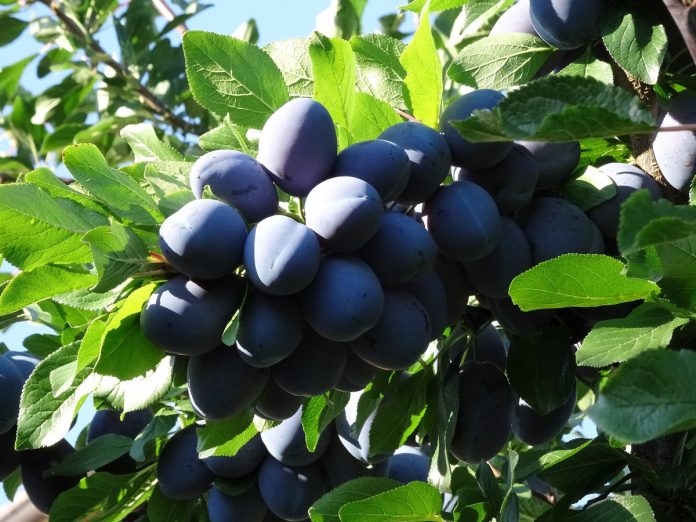 The documentation of ancient plums growing in antiquity is sparse. The best evidence of that oldest existence is best documented through America’s most famous pomologist, Luther Burbank, who reported in his twelve volume botanical literary classic, Small Fruits, Volume IV page 136, that the European plum, Prunus domestica, and its ancestor fruit originated in the Caucasus Mountains near the Caspian Sea. Burbank detailed evidence that the prune (dried plum) was a staple food of the Tartars, Mongols, Turks, and Huns “who maintained a crude horticulture from a very early period.” Several websites have put forth the absurd idea that, because the European plum, Prunus domestica, seeds were not found in the ruins of Pompeii after the eruption of Mount Vesuvius in 79 AD, “whereas, most other old world fruits were,” that this plum could be concluded to be a recent hybrid of “spontaneous chromosome” doubling to produce a hexaploid offspring.

The earliest reference to plum history in the American colonies came from Prince Nursery of Flushing, New York, that was established in 1737 and reported in 1771 in an advertisement “33 kinds of plums” for sale. These plum trees were no doubt European plums, Prunus domestica.

After the year 1755, Henry Laurens, who was a guest and friend of Wililam Bartram, introduced olives, limes, ginger, everbearing strawberry, red raspberry, and blue grapes into the United States. From the south of France he introduced apples, pears, plums, and the white Chasselas grape which bore abundantly. Henry Laurens lived in Charleston, South Carolina and served as a President of the Continental Congress.

William Bartram described two species of American plums in his famous book, Travels, in his 1792 trip to Georgia, where he identified the Chicasaw plum, Prunus chicasaw, and in Alabama, he found a wild plum, Prunus indica.

Luther Burbank contributed more toward improving and hybridizing plum trees of different species than any other person in history. His work on the plum group of stone fruits stands apart from any other person for his unequaled contribution to improving various fruits that are grown and enjoyed today.

Burbank states that his importation of twelve plum seedlings in the year 1885 was the “most important importation of fruit bearers ever made at a single time into America.”

Burbank brought plums from all over the world and intercrossed them in a giant “melting pot” to produce the best characteristics and to reject the wrong ones. These genetic plum mixtures were recombined for many generations and resulted in plum hybrids today that are so different from the original species as to appear to be new species.

Burbank stated that he spent more time hybridizing plums than with any other plant breeding program, and he reported that he screened 7.5 million plum hybrid seedling crosses before releasing outstanding cultivars for sale. His famous line of plum trees that were popular in the late 1890’s are still admired and grown commercially for sale and in backyard gardens today, such as Burbank, Santa Rosa, Wickson, Golden, Satsuma, Shiro, and Ozark Premier. His first huge success was applauded by USDA Professor, H.E. Van Deman, who suggested that the pick-of-the-lot creation of Luther Burbank be named after its creator, thus, the “Burbank Plum.”

Most of Burbank’s plum tree successes come from his combining the genetic materials of 4 major types of plums whose ancestry came from Japan, Europe, America, and China.

The most successful crosses between plums come from the Japanese plum, the most exotic, ‘Satsuma,’ the name suggested by Professor H.E. Van Deman of the USDA, who identified it as being imported from the Satsuma province in Japan. This unique plum grew a red skin with a pale-blue netting bloom overlay. The pulp was dark purplish-red, firm, tasty with an excellent quality to be preferred for home use.

European plums, Prunus domestica, are varied in sizes, largest to small, sweet or sour, complex genes, many colored skins, very widely adaptable, good for fresh eating, drying, or canning. The disadvantage: they are too juicy or watery. “Green Gage” is a well known standard European cultivar. Prunes are very high in sugar content.

Several species of America plums are very hardy and productive to the extent of covering the ground in spring with several layers of fruit. These plums can be tasty but have poor shipping quality. Burbank released an excellent hybrid strain of this cross called “Robinson plum.”

The “Myrobalan” plum originated as a French species, Prunus cerasifera is used extensively as a peach tree and plum tree rootstock that tends to be compatible with the resulting fruit tree union and appears to be highly resistant to nematodes and root diseases.

Burbank’s goal in hybridizing plums was to produce a tree that had “stability, novelty, variety, hardiness, beauty, shipping quality and adaptability.”

The plum leaves and twigs exhibit many subtle characteristics that can be experienced by the plant hybridizer to predict the future characteristics of fruit that will be grown from small seedling crosses. Most hybridizers known from experience a predictable outcome, even though these plant qualities are too intangible to explain to an audience, like changing facial expressions or minute variations of color changes. If the leaves of a plant are dark red, the fruit will be red. This same phenomenon is applicable to flowers such as the canna lily leaf color, and the red rhizome color; or in the crinum lily cultivars, a red bulb means a red flower; a light green bulb means a white flower.

Burbank crossed many plums that had a tendency to produce fruit with a high sugar content, like the sweetness of figs, pineapple and oranges. This high sugar content makes it possible for the plum (prune) to insure long term preservation, when it is dried. The prune contains a thick and tough skin of such texture that is required to not crack when the commercial drying process begins and proceeds to deliver a tasty, honey-sweet fruit that lasts well.

A prune will not dry properly into a marketable fruit, unless the plum contains a sugar concentration of at least 15%. Before drying, the prune is submerged briefly into an alkali solution that prevents future fermentation by preventing microbes from growing on the surface of the skin. For satisfactory prune production commercially, a prune tree must be a reliable grower with an annual substantial crop of fruit. The prune must ripen early, when the days are long and warm and must drop from the tree to avoid expensive picking costs at the proper ripening time. The prune fruit must cure and dry to a black color and grow a small pit. Most prune hybrids have been hybridized from the European plum, Prunus domestica.

Plum fruit is rated high in antioxidant content that offers many health benefits like Vitamin A, Vitamin B1, Vitamin B2, Vitamin C, Niacin, and the minerals; Calcium, Potassium, Phosphorus, and Iron.