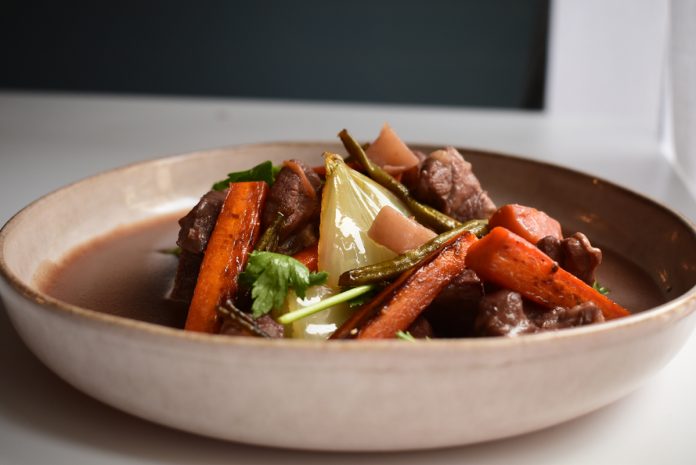 Many of America’s favorite venison recipes originated during the pioneer days of the United States when whitetail deer traditions began. In those years of old, “store bought” goods were scarce and families relied on the ingredients at hand for creating home cooked meals. Families regularly hunted for meat and whitetail deer were plentiful. Early venison recipes were extra flavorful because meals were cooked in an iron kettle hung over an open fire. Many a meal in the United States is still prepared in this old-fashioned way, especially at summertime fairs and family get-togethers.

A particularly tasty dish that lends itself well to this manner of cooking is venison stew. Early pioneers liked stews because they require small chunks of meat so everyone could receive a hearty helping of stew but only consume a small amount of meat. Modern venison stew recipes turn out well using either ground or cubed venison. Venison stew is a flexible dish that can be made with the vegetables in season including potatoes, onions, okra, peppers, carrots, green beans, peas and corn. Simmered together, especially over an open fire, the vegetable and venison flavors meld together into a delicious stew.

What Is The Difference Between Beef and Venison?

Another American favorite dish that uses venison is chili, which originated in the southwestern United States, particularly in the Republic of Texas. In the early days of Texas cattle ranching, cowhands chowed down on venison chili during the long cattle drives to cattle markets in Missouri. Chuck wagon cooks combined their canned beans with wild chili peppers that grew along the trail to make the first chili recipes. Chili has evolved over the years into a sophisticated dish; many cooks compete in chili making contests all over the United States. Chili recipes using venison can be carefully guarded secrets.

Another American favorite is venison sausage. Like chili recipes, butcher shops often use proprietary recipes for venison sausage with their own secret blend of spices. Venison sausage is a versatile culinary delight, eaten cold in sandwiches or as a snack, or heated as a breakfast sausage or main dish. Native Americans taught the early settlers how to dry venison into jerky. Even today, people who enjoy venison still make their own venison jerky.

Meanwhile, people enjoy the fine cuts of venison as roasts, steaks and medallions. There are countless gourmet quality recipes for these prime cuts of venison. Farmed venison, where premium bred deer are fed a diet designed to produce top quality meat, is the ultimate source for use in these gourmet venison recipes.