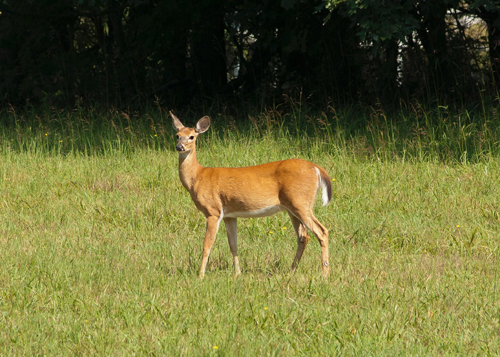 North America is home to many species of deer (Cervidae). While you may know some, chances are you don’t know all of them. Here, we’ll take a look at the different North American deer species.

The white-tailed deer is the common and widespread species living in North America. In the early 1900’s the populations of this deer had dropped to critical levels threatening the survival of the species. However, with hunting regulations and preservation efforts, their population now thrives as the largest in North America.

White-tailed deer are most easily identified by their bright-white colored tail, which they raise as an alarm signal to others when threatened or spooked. This species is typically found east of the Rocky Mountains, although some still live in the western portions as well.

The second most common deer species living in North America is the mule deer. These deer get their name from their large, mule-like ears which can turn nearly 180 degrees to pick up sound in any direction. As opposed to the white-tailed, mule deer typically live west of the Rocky Mountains.

There are several subspecies of the mule deer, including the black-tailed deer. As you may expect, this subspecies has a unique black tail, making it easy to find.

It’s important to not confuse this species with Elk, as the North American Moose are simply “Elk” in many countries throughout Europe.

The North American Moose is the largest of all deer species with a top shoulder height of 8 feet and weight of nearly 2,000 pounds. They typically roam the lands in Canada, Alaska, and northwestern portions of the continental United States.

One notable difference with moose is their large, webbed antlers. It’s believed their antlers have this unique webbing to help them pick up sounds from far away. Also, moose use their antlers as foraging tools by knocking down edible brush with them.

Known as reindeer when domesticated, Caribou are a unique species of deer who live in much of Canada and Alaska.

Caribou are the only species of deer in which the male and female grow antlers. The reason for this is because both genders use their antlers as food-foraging tools in the snow. With them, they will scrape the snow and uncover edible plants and greens. The males (known as bulls) typically have larger antlers.

Deer are beautiful creatures and are a large part of our North American history. Understanding and appreciating them are important, as we must do our part to help conserve and protect their populations.

Ken is an avid outdoorsman and writer for deerantlerstore.com, where you can learn more about whitetail deer as well as other types.